The members of the Spitzee Post Band first met each other while playing at pub jams in High River. After the floods of 2013 that devastated the town, the band members came together to play in the same pub. The band's mandolinist and lead singer Joe Gore explains, “After the flood there was nothing to do, so I took all of my equipment and Wayne and Bob and Craig all got together and played.”

The band members each bring a different skill set to the music. Gore explains, “Craig is a phenomenal fiddle player. He’s just unreal. Wayne Corner’s played with everyone! He took lessons from Tim Williams for four or five years and he’s a killer slide player. Bob Weder is old enough to be my father but he’s up on stage, just cranking it out. My wife had never played an instrument before in her life and five years ago she picked up the bass and submerged herself in it. Now we go to festivals and she plays with anyone she can find there. She’s truly inspiring!”

In his own case, Gore says, “I’ve been a music nut since I was a kid! I drove my mom in a ‘58 Ford Country Squire from Niagara to Detroit to see Elvis when I was 15. The music bug hit me at that point. I picked up the mandolin quite a few years back. Seeing people like Sam Bush and Ronnie McCoury and John Reischman play stuck in my head and started me playing.”

The band’s initial repertoire was drawn from the music that influenced Gore which was mostly cutting edge bluegrass by bands like the Steeldrivers, the Seldom Scene and the Del McCoury Band. Now the band is writing their own music and exploring different directions in song writing.

The song writing process starts with the band sitting down and opening a good bottle of red wine says Gore. He continues, “We’ll put out a big storyboard, pick a subject and everyone will contribute. Sometimes we can start in one direction and the song will end up somewhere completely different.. The creative process is a group process for us. Most of the songwriting has been done by Coralee, myself and Wayne.”

Each of the songwriting band members bring different influences into the band’s music. Gore says, “I love David Francey’s song writing, I love John Gorka’s song writing and I’d say my idol for song writing over the years has been Chris Stapleton. I was a huge fan of his writing even before he was with the Steeldrivers. I’m also a fan of Townes Van Zandt and Steve Earle too.”

He adds, “Wayne has more blues and folk music influences and Coralee has been influenced by folk music and some bluegrass because I introduced her to it.”

Writing a song that is accessible to a wide number of people is important for Gore. He says, “To me writing something that everybody can relate to is good songwriting. It all comes down to getting people to relate with what you’re saying.“

The biggest challenge faced by musicians lately is the music industry itself in Gore’s opinion. He’s concerned that people no longer own their own music and it can be appropriated and used by others more freely. He says, “It’s so hard for a band to make a go of it because there’s so many little studios and nobody’s giving money to you to do it any more. It’s all gone to big business. I feel sorry for the younger generation. I’m 55 and I look at the young bands that I find inspiring and ask, ‘Do you know how tough it’s going to be financially to get  gigs in our economy and to make a living doing what you love?’”

Attracting listeners is a matter of balancing original songs with cover tunes for Gore. He says, “If we were a traditional bluegrass band, we would be hard pressed to get a gig in a church and that’s pretty tough to say. We’re willing to be versatile and the music we make is taking tradition, giving it a squeeze and making it what people want to hear so that’s why we’re playing clubs and filling them up.”

Gore talks about the necessity of finding a balance between cover tunes and original songs for a band. He points out, “You have to do what you have to do to get your songs heard, so if that means playing a few of someone else’s, that’s what you have to do!  However, you still get to choose the music that you cover.”

The band is in the process of recording a new CD that Gore describes as a cross between folk music and the music of bands like the New Grass Revival, The Seldom Scene and the Steeldrivers. He adds, “The songs are life stories that talk about where you came from, your relationships or the job that you just lost.  It’s covering life from all sides.”

As for the band’s future, Gore says, “Bluegrass was off for a while because young kids didn’t want to hear it but now they’re listening to the new stuff that’s coming out. If we can inspire more people to look at the music and take up an instrument then that’s what we want!”

For more information about the band, visit their website.

This band profile is based on a telephone interview with Joe Gore conducted and recorded on March 18, 2016. 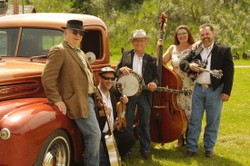