I talk to John Reischman about the creative process, working with the band and the state of the folk/roots music scene in Canada.

The Jaybirds came together as a band when John Reischman was releasing his Up in the Woods album in 1999. He wanted to do some shows as part of releasing the CD so he brought together players with whom he’d worked before. Initially, he brought Nick Hornbuckle in to play banjo since he’d played on the recording, Trisha Gagnon on bass, Chris Stevens on guitar and Greg Spatz on fiddle. Reischman brought in the band’s current guitarist Jim Nunally a year later. The band’s current line up has been the same for the past 15 years.

Although the band came together to play Reischman’s own tunes, he enjoys being part of a band where each member contributes. Initially he was choosing most of the music but he says, “Eventually the band saw what I was going for stylistically and they started bringing material that they thought would fit.  For the most part, I agree with what they bring now.”

The band explores a wide range of different music. Reischman says, “For straight up bluegrass, I like the real traditional stuff so we’ve covered some Ralph Stanley and some Bill Monroe but not their hits. There’s a great song by Bill Monroe called You’ll Find Her Name Written There that just has that lonesome sound.”

Reischman also works with song writers like Susan Crowe. He points out, “She and I have collaborated on a couple of tunes that the Jaybirds have done like Cypress Hills and another one called In the Fall. Those are  on the gentler side of the spectrum.”

The Jaybirds also play original instrumentals by Reischman as well as Nick Hornbuckle and Greg Spatz.

The process of arranging the music starts with the person who wrote the song or brought the song in suggesting how it might be arranged. Reischman says, “It can change. Sometimes it changes in the studio. On Trisha Gagnon’s song On My Way To You, Jim heard Nick just playing this little figure which he thought would make a good intro. It hadn’t been the case up to that point and everybody agreed. There’s a bit of give and take and it’s usually a group process.”

Although Reischman has positive feelings about the folk/roots music scene in Canada, there is one area at folk festivals that he highlights as an issue. He says, “Sometimes you get too many bands and too many people on stage at one time during workshop stages. It’s hard on the musicians, it’s hard on the sound crew and it’s hard on the audience because it takes so long to get the sound sorted out. I understand that magic happens when people collaborate but it gets away from the whole point of workshops. It should be somewhat instructional, not just a jam session.”

The proliferation of talented young musicians in Canada is something that Reischman remarks on. He says. “More super talented young musicians are coming up all the time. There’s a really fine band called The Slocan Ramblers from Toronto and they’re really making a name for themselves touring all over.  There’s also the Lonesome Ace String Band who do a creative presentation of old time music in their own style.”

He adds, “I was very happy that my friends Pharis and Jason Romero won a Juno Award in the roots category.  It was well deserved because they are great players, singers and song writers. It’s nice to see that roots category really honouring true  roots musicians.”

Another challenge that Reischman highlights is the fact that the band’s been around the scene for a while. He says, “Artistic directors want to hire the latest young acts, which is a positive thing, but I’ve seen a lot of bands come and go and we’re still at it. I think the music is still valid."

Reischman chuckles and adds, "Maybe we will eventually fall into the elder statesman category and start to get more bookings again!"

The band is also working on a new recording but Reischman says that they’re not rushing to get it out. The band is continuing to make music without any major changes although Reischman adds, “I like the presentation when we play a concert and mix things instead of always having five people playing to having a duo or a trio makes it a little more dynamic and interesting for folks.”

Inspiration comes in fits and starts for Reischman. He explains, “I released a solo recording aside from the Jaybirds although it included all of the Jaybirds on a few cuts at least and I had a few original tunes. I haven’t actually written anything since then. I’ve found that I’ll write a tune or two that I think is pretty good and I’ll just have the confidence to keep writing more.”

Another source of inspiration for Reischman is teaching. He says, “I teach a lot at these various music camps that last for several days. That’s always a great place to get inspiration when you’re immersed in music all day long and hearing other people playing.”

For more information on John Reischman and the Jaybirds, visit their website here.

This interview with John Reischman was conducted and recorded on May 10, 2016.

Great, interesting article. Keep it up. 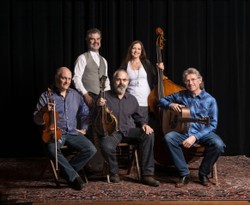