I talk to The Dead South's Nate Hilts about storytelling in songs, musical inspiration and the band's creative process.

The Dead South started when Nate Hilts, the band’s guitarist and lead singer, met Colton Crawford who plays banjo through mutual acquaintances. Hilts says, “I was listening to Trampled by Turtles and he walked in and said how much he enjoyed that band. He told me he just got a banjo and that he always wanted to be in a band. I said that I’d always wanted to be in a band too so we decided to give it a shot.”

Hilts and Crawford played with two friends of theirs until those friends moved away. It was at that point that they added Scott Pringle on mandolin and Danny Kenyon on cello to create the band’s current line up.

Each band member brings a different sensibility to the songwriting for The Dead South. Hilts speaks abut his own songs and says, “Most of my songs are based off of spaghetti Western themes telling weird, morbid stories. I get ideas from movies I’ve seen or books I’ve read. Very few of my songs are based on actual experiences and if you listen to some of the lyrics, you’d hope they weren’t.”

The creative process for The Dead South is collaborative. Hilts explains, “One of us will come in with the skeleton of a song. It might be just a chord progression or a chord progression with words and then we sit down, try it out and from there everyone gives their input and makes adjustments. We try to come up with a good starting point and see how it builds.”

One of the biggest challenges that Hilts highlights is the fact that starting a band is like running a small business. He says, “We ended up starting a business that we didn’t even mean to start and we ended up doing well. The challenges are just what we’ve encountered along the way. You have to look at things like taxes, what to do if you aren’t incorporated and things like that.”

He also cites the challenges in getting everyone together to practice but adds that it hasn’t been that much of an issue for the band thus far.

Hilts has nothing but praise for the Canadian music scene. He’s excited about the diversity of different types of music that are being created. He points out, “I think the music scene in Canada is awesome and only getting better. We have such talented groups of people out there making insane music. We tour Europe quite a bit and just because there’s a band from Canada playing, they immediately check it out on YouTube.”

In the future, the main goal for the band is to continue moving forward and getting their music out into the world. Hilts says, “We’ve already done a lot of cool things that we never imagined we’d be doing. We want to keep making a living off of this and enjoying what we’re doing.”

There’s also an album in the works that’s going to be released in Europe in August and in Canada in October. Hilts is positive about the recording process and says, “We love going into the studio. It’s such an awesome experience and you learn a lot when you hear yourself back on repeat.”

The band’s motivation comes from their sheer love of the music that they’re playing. Hilts explains, “We all love music enough to give up a lot of  things. I gave up on school. I had one year left in school but I gave up finishing it then and there to pursue the band.  My drive to keep things going is pretty high. Two of the other guys are substitute teachers and they love teaching but they love writing music and being on the road quite a bit more. The only way to do that is to write music that people want to listen to.”

For more information about The Dead South, visit their website here.

This profile is based on an interview conducted with Nate Hilts and recorded on May 2nd, 2016. 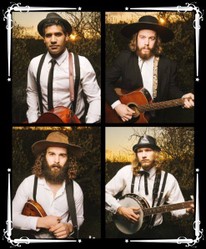