The Slocan Ramblers create energetic bluegrass music with virtuosity, creativity and the desire to explore new directions for their music.

A shared passion for bluegrass music was the spark that started the Slocan Ramblers off as a band. Their three original members were all studying jazz at Humber College but they began to develop an interest in bluegrass music after hearing Toronto’s Foggy Hogtown Boys play. The band’s bass player Alastair Whitehead says, “At the time, we were just getting into the scene so we used to go see them just about every week. They were a big source of inspiration for us. “

The three core members of the band were Whitehead, Adrian Gross (mandolin player) and Darryl Paulson (guitarist). They all started jamming together while still studying jazz. They added their banjo player, Frank Evans, when Whitehead was working as a bike mechanic. He explains, “I heard from somebody else that he was a really good banjo player. We had him over for a jam and everything really clicked for us musically and in terms of our personalities.”

Eventually the band got a weekly gig at a bar called The Cloak and Dagger which lasted for two years. They recorded their first record which did well and that allowed them to start touring and transform the band into a full time job. They recorded their second album entitled Coffee Creek at the beginning of 2015.

All of the band members, except Frank Evans who started playing banjo when he was 12, came to bluegrass in a roundabout fashion. In Whitehead’s case, he grew up in Newfoundland surrounded by a strong folk music culture. As he got older, he developed an interest in jazz music that lead to his studies at Humber College. After four years of studying jazz, he was starting to burn out. He says, “I felt the urge to get back to the roots of that music. There’s something about  bluegrass that is so direct and the live performance aspect of it was something that I was missing at that point in time.”

The Slocan Ramblers started out as a way for the members to learn the music and steep themselves in the traditions. They started out faithfully interpreting bluegrass tunes by the greats like Bill Monroe and the Stanley Brothers. As the band has evolved, they’ve moved in a slightly different direction. They began writing their own instrumentals and now Whitehead explains, “Coffee Creek was the first time we wrote our own lyrics. We still think of ourselves as a bluegrass band but we have quite a wide range of influences that we filter through that bluegrass framework. It changes all the time as we get more comfortable with song writing.”

Although touring presents challenges in terms of their personal relationships, the band enjoys the process of going on tour. Whitehead says, “We’re really lucky that we get to tour a lot and we do pretty well on the road. We all get along pretty well. Some bands connect musically but don’t connect on a personal level as well. The band has a really great rapport and we still like hanging out together. I think we’re stll pretty excited about going out on tour. I think that goes a long way to keeping our spirits high.”

Although the challenge of trying to succeed financially as professional musicians remains constant, Whitehead is upbeat about the roots, bluegrass and folk music scene in Canada.  He says, “In terms of the craft and the artistry of the people doing it, I think it’s better than it’s ever been. There’s lots of world class acts coming out. We just played a show with Old Man Luedecke from the East Coast and I was blown away by the show he puts on. Here in Toronto there’s numerous world class bluegrass musicians and out west there’s people like Jason and Pharis Romero. There are hubs of creativity and music all across the country.”

Overall the band is pleased about its direction. Whitehead points out that their forays into songwriting have been quite rewarding. He continues, “We were all intstrumentalists growing up so we’ve worked really hard at mastering our instruments and at being performers. When we started to focus on writing music and composing it opened up a whole other world for us. We’re all getting excited for where the new material is going to go.”

The band finds inspiration in going on tour and being exposed to all of the music that’s being made around North America. Whitehead says, “It’s great to see what different people are doing and how they’re pushing things and trying new stuff. It’s really inspiring! Within the band everybody is active musically and we all practice a lot and listen to a lot of different music. We all get inspiration from each other.”

For more information on the Slocan Ramblers, visit their website here.

This profile is based on an interview with Alastair Whitehead conducted and recorded on April 26,2016. 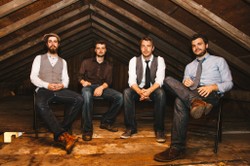