I talk to The Scudd Family Band about their songwriting process, where they find inspiration and how they're approaching the music that they make.

Michael explains, "We were just a bunch of people hanging out and wanting to play music together. Megan bought a mandolin and David bought a fiddle so that’s where it started."

At this point, Roadtrip jumps in and adds, "Since all the other instruments were taken, they made me go out and buy a double bass. It's the only other bluegrass instrument that was left for the band to add."

Inspiration comes from many sources for the band's members. Michael says, "A lot of stuff that I like is the 1960’s and 70’s folk revival like Dave Van Ronk and Townes Van Zandt. Once you get into that, you start getting into older musicians like Mississippi John Hurt.”

Roadtrip adds, "I'm from the east coast so I grew up listening to a lot of the east coast family bands like The Rankins.  The idea of getting together with a bunch of friends or family in the kitchen and playing folk songs and improvising on them is a strong influence for me.”

At this point, David says, "I'd say my primary influence is Frank Fairfield. I basically saw a couple of videos and fell in love and that was basically all there was to it. He influences me as a fiddle player. He's got a very distinctive style of playing that might be described as ‘sawing a baby.’ "

When it comes to songwriting, Michael and Ben are the band's main writers. Michael talks about his approach and says, "I sit down and play with chords and once I find the chord structure I like, I'll try to sing or hum a melody and after that it's just about getting words behind it. I'm not a words guy. Ben writes poetry that we'll put to music so he writes differently than I do. Once I write a song, usually he'll have words for it and we'll take a second pass at it or he'll have a song ready and we'll work on it from there."

The band's choice to play bluegrass comes down to one major factor in Michael's view.  He says, "The number one thing is that it's easy to play. You're playing in G or C or D which is nice because some of us have only been playing our instruments for a year.  Being able to pick it up and have it  be accessible is a big thing.”

As the house band in a bar, covers make up much of what the band performs. Michael explains, "It's easy to learn and do and it's what people want to hear. They want to hear songs that are familiar. Ben and I made an album so we write stuff together but typically it's covers that we're playing for people."

However, as Roadtrip explains, "There's one noteworthy exception which is a song called Chicken Wings. We play that song after every show but I don't know that we've ever practiced that song. It's just a drunken sing-along that came fully formed  out of someone's head!"

The fact that the Scudd Family Band has only been around for a short time means that getting exposure is important for them. Michael says, "Generally we're just trying to find ways to get involved with and connected to the music community. We're just building contacts and making sure people know who we are but that's going to come with festivals and things like that. We've been very fortunate that we've basically become the house band for the bar we're playing at!"

Another challenge for the band is learning to master the technical side of making music according to Roadtrip. He says, "We've been fortunate in being able to come up with equipment and buy things second hand but now it's a matter of figuring out how the equipment works. Is it the right stuff for our band? Is it right for the instruments and voices that we have? That's a big challenge."

Despite being relative newcomers to it, Michael and Roadtrip both have positive views of the Saskatchewan bluegrass scene. Michael observes, "Here in Saskatoon there's bluegrass jams that go once a month from the Saskatoon Bluegrass Society. Northern Lights Bluegrass and Old Tyme Music Society puts on concerts and festivals like Ness Creek. We haven't gone to those yet but the community seems to be there and going strong."

Roadtrip adds, "We've had bands come and open for us. They've been fairly young people and they're all pretty enthusiastic about the music so that's good to see."

The band is quite pleased to have come so far in a relatively short time, so they're only starting to think about their future now. Michael points out, "We've exceeded our own expectations. We've gone from something that started as a joke and we're now the house band in a bar. I think the next thing will be for us to play some festivals."

Roadtrip says, "Ness Creek is a huge festival in Northern Saskatchewan. We'd like to play there. I'm hoping to play at a barn burning. I know a guy with a 2,500 sq. ft. barn that he's going to put to the torch in the next couple of years and I can't wait to play at that.”

Touring might be more of a challenge for the band because of the number of musicians in the band in Michael's view.

There are a number of factors that keep the band motivated to make music. Michael says, "It's just fun. If we didn't like getting together and doing this, we would have stopped a long time ago."

David adds, "It’s about getting together with your friends and making something. It ends up being something that we’ve created together and we can show people.”

Roadtrip continues, "I really like the learning aspect of it. I've learned so much foundational music theory by playing i the band. I'm learning so much about sound and miking and recording that it's a phenomenal experience."

He concludes, "We play at a Legion bar which has been amazing. It's a really great community!"

For more info on what The Scudd Family Band is up to lately, visit them here.

This profile is based on a telephone interview with The Scudd Family Band on Feb. 28, 2017.

We have been to a couple of performances and danced and sung along. This band is a ton of fun .My has been and I even held our birthday celebration at the Legion and the band was our entertainment. All of our friends really enjoyed the band . 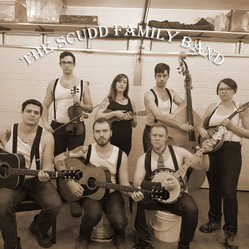