One of Chef Rodrigo Rodas' first major culinary inspirations was his grandmother. Rodrigo says, "She was a really good Mexican cook. She never worked professionally but she was very good at cooking traditional Mexican food. She was the first person who inspired me to want to learn how to cook. After that, one of uncles was a general manager in a hotel. He gave me some shifts serving but I realized that what I really wanted to do was cook so I went to culinary school."

After he finished university, Rodrigo did a stage with Chef Patrick Raingeard at La Table de Patrick Raingeard. He explains, "It was a very important moment in my career. The kind of food he did is totally different than Mexican cuisine but his high standards, the colours, the textures as well as the respect for the products and the final dishes we served to the customer were very inspiring."

Within Native Tongues concept of a Mexican taqueria, the chef feels free to combine his roots with contemporary flair. He points out, "I can work with and play with all of the traditions of Mexican food. We're free to do almost anything that we want here so it's a great opportunity for me to return to my roots but also make traditional food more contemporary."

A good example of Rodrigo's approach to food is Native Tongues' dish of beef brisket chilorio. The chef says, "It's a very traditional dish from the north of Mexico. It's normally made with pork shoulder and a mixture of spices and chiles. We're using beef brisket instead of pork shoulder. I tried to play with the texture of the meat and cook it to a perfect point. I also tried to make the overall dish look cleaner and more presentable."

He continues, "We tried cooking the brisket sous vide, but sometimes the traditional methods are the best for certain things so we went back to braising the brisket. Instead of putting the queso fresco and the other garnishes on the side, I did a whipped queso fresco and then I play with colours and add some pickled radishes that also balance the flavour with their acidity."

Rodrigo adds, "We finish the dish with micro cilantro instead of using chopped cilantro which gives the flavour more balance. We serve it on a large plate with some tortillas and avocado on the side. It's a family style kind of serving because we want to encourage people to share the dishes and use their hands to eat."

While the chef uses as much local product as is feasible, getting some ingredients in Alberta just isn't possible. Rodrigo says, "We try to get most of our proteins from farms closer to Calgary to support the local producers. I have to do my research to get the best quality of products that I can. We buy things like our epazote and hoja santa* from local importers or bigger suppliers depending on who has the best quality. Sometimes the big suppliers can get products more easily from California or Mexico."

Rodrigo feels that the three most important traits for a chef to possess are discipline, curiosity and respect. He elaborates, "Discipline is important to working properly in a kitchen.  You need to have curiosity as a chef because without it you can't go forward. I don't necessarily think a chef has to go to school but I think that we need to learn. We always need to be researching and looking for different ways to do things. Respect is very important too. We have to respect our colleagues, our customers and what we're doing as chefs."

Looking to his mentors and to the people that Rodrigo admires is one factor that keeps him inspired in his culinary career. He says, "I always look to Patrick Roger because even if he isn't an international celebrity chef, he's a chef that respects the products that he's using a lot. His dishes are so clean and so perfect. Another person I would mention is the designer Karim Rashid because he's always doing something new. He's always trying to do more and more different things."

He also finds inspiration in the traditional dishes of Mexico. Rodrigo explains, "I also get inspired when I try to research something about a traditional dish from a region of Mexico because I always find something interesting there. All of these things keep my passion filled all the way up.”

This profile of Chef Rodrigo Rodas is based on a recorded telephone interview with him conducted on Mar. 24, 2017.

Julia Child taught Americans (both men and women) how to enjoy cooking. She w... 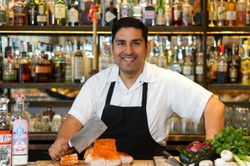 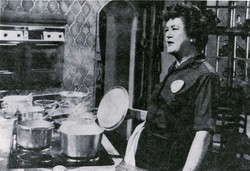 Julia Child taught Americans (both men and women) how to enjoy cooking. She wanted people to think of cooking as a joy and an art, and not a chore to hurry through.
100%  23   9 sockii
Easy Recipes

There are lots of ways to enjoy this popular superfood. Here I'll share a few of my favorite kale recipes.
Loading ...
Error!