Charlie Birger - The Last Public Hanging in the State of Illinois

You don't normally think of gangsters in small rural towns, but Southern Illinois had its share.

Many people remember Chicago gangsters Al Capone and Frank Nitti from the prohibition era (a national ban on alcoholic beverages from 1919 to 1933). But in Southern Illinois, there were gangsters such as the Birger and Shelton gangs.

The Historic Jail in Benton was used from 1905 to 1990. At one time the front was a two story home for the sheriff and his wife, and the jail is attached to the rear. Charlie Birger, the head of the Birger gang was hung from a scaffold outside the jail in 1929. This was the last public hanging in Illinois.

A new jail was built in 1991 and the old one is now a museum and the home of the Franklin Tourism Bureau. I toured the Franklin County Jail Museum and was given permission to take photographs.

About the Birger and Shelton Gangs 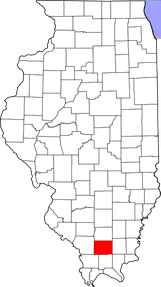 Charlie Birger came to Southern Illinois during the time of Prohibition in the 1920s. Birger and his gang were involved in bootlegging (smuggling illegal alcohol), gambling, and prostitution  His gang and the Shelton gang both drive armored cars and carried machine guns.

During this time, many immigrants worked in coal mines and they needed protection from the Ku Klux Klan; a group that hated foreigners, blacks, and Catholics. Birger himself was an immigrant from Russia and his gang joined forces with the Shelton gang to fight the Klan.  The two gangs later had a falling out over bootlegging territory though, and became enemies.

Charlie Birger and his family lived in Harrisburg, a small town in Williamson County.  Birger was a respected family man in that county; providing coal and food for the needy.

For a long time, Birger continued his criminal career without being convicted with any crime.  He would set up his rivals to publicly threaten him so he could claim self-defense.

However, stories began circulating that State Trooper Lory Price and Birger were involved in stealing cars.  Charlie was supposed to have hid them and then Trooper Price would act as though he found the cars and collected the reward, splitting it with Birger.

But the trooper and his wife soon disappeared.  Birger was said to have shot the trooper while his men kidnapped and shot his wife and threw the body down an abandoned mine shaft.

When the story broke five months later, coal miners searched the mine shaft and found Price's wife.  Although the trooper was considered a gangster, the killing of his wife and the way her body was disposed of was not tolerated by the people in the community.  They no longer admired Charlie Birger despite his generosity.

Not long afterwards, in Franklin Country, Joe Adams was elected mayor of West City, near Benton.  The new mayor aligned himself to the Sheltons and became an enemy of Charlie Birger. On December 12, 1926, two of Birger's men knocked on Adams' door and shot him in front of his wife and young daughter.

The sheriff charged Birger with ordering the mayor’s killing after the actual killers turned state’s evidence.  Birger had been arrested many times, but he was charged in Franklin County, which he didn't control like Williamson County.  The two killers got life imprisonment and Birger was sentenced to death.

The Hanging of Charlie Birger Birger was executed, the method used was the electric chair.  But when he committed his crime, the method was hanging.  So that's why Birger was hung.

Birger insisted on wearing a black hood rather than a white one because he didn't want to be confused for a Ku Klux Klan member.

On April 19, 1928, Charlie Birger, was hung at Benton, Illinois, for the murder of Mayor Joe Adams. This was the last public hanging in the state.

This is a replica of the scaffold that was erected to hang Charlie Birger. Birger could see it being built from his jail cell window.  He's reported to have said, "Build it strong, boys"

Witnesses claim Birger said, "It's a wonderful world," just before he was dropped through the trap door. He was 48 years old when he died. Sign Hanging on the Wall at the Franklin County Jail Museum

Books About Charlie Birger and The Sheltons

I read both these books and recommend them for anyone interested in history.

Other Books on Gangsters and Prohibition

Oh wow this was really interesting and a bit unusual. Definitely caught my attention.

Second: Actually I've been "conditioned". Good food is to Miami, Florida -AS- Gangsters is to Illnois. Yeah! When I hear the word Illinois, I think Chicago-slash-gangster.

Third: People called "Charlie" tend to have colorful histories which is the reason my husband dislikes his own name. :)

{P.S. I love his name. His first and middle name. But especially his last name!!!} Iwear it with pride.} 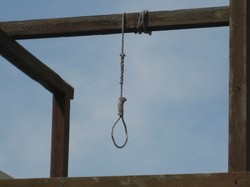 A Knight of Another Sort: Prohibition Days and Charlie Birger,...
100%  18   12 AngelaJohnson
Local History When I go driving on country roads, I'm always intrigued by old cemeteries.  I like to walk among the gravestones and take photos.  It's like taking pictures of history.
41%  3   4 AngelaJohnson
Mystery Martha Grimes has written a series of police mystery novels featuring Richard Jury, a fictional inspector with Scotland Yard. Each detective mystery is named after a pub.
Loading ...
Error!