I talk to composer Matt Poon about his inspirations, his approach to composition and his views on the state of classical music in Canada.

Matt Poon has been creating his own music since he was a small child. He started taking piano lessons when he was six years old and points out, "I remember sitting down at the piano and improvising, making random sounds.”

This early interest grew and after Matt was exposed to contemporary classical music, he found himself drawn towards composing. He started out writing for piano but eventually started to write for other instruments.

One of the composers for whom Matt has a strong affinity is György Ligeti. He says, "I was introduced to Ligeti's etudes at my very first composition lesson when I was around 16 years old. I remember being shocked because I'd never heard anything like that being played on the piano. I found them intellectually and emotionally complex. I knew that I wanted to play them but they were beyond my technique at the time. Since then, I've spent time studying the etudes and learning how to play them."

Matt adds, "The etudes influenced me as a composer in that I think about how my music is perceived. Is it intellectually interesting? Does it also have emotional content to it?"

In his compositions, he enjoys exploring the different sounds that can be created by acoustic instruments. Matt continues, "I try to find meaning between sounds and structure the music so that there's a natural progression and an arc to it."

One of the major challenges for any composer is knowing how works for  larger ensembles or orchestras might sound before they’re performed. Matt explains, "When I first come into a rehearsal, I'm actually pretty nervous. I wonder if the composition will sound how I hope it's going to sound? With experience, you can guess what your composition is going to sound like, but until you hear it you don't know."

The process of composition doesn't stop after the rehearsal. Matt says, "After I hear a piece rehearsed, I ask myself if it sounds how I want it to sound.  Do I like it or do I not like it? How do I advise the performer or the conductor about how to adjust? What is their input on my composition?"

For example, "My last work for piano, clarinet, violin and cello was premiered at the Orford Arts Center when I was staying there a few years ago. It was also premiered in NYC so it has gotten at least two performances which is great. In the first performance, I realized there were certain tempo problems with it. I liked it slow at first but the second performance made me realize that I wanted it more up tempo."

In the future, he has some projects that he'd like to work on. Matt says, "I am looking forward to writing for a string quartet as well writing for a piano and erhu duo based in Vancouver. The pianist in the duo is someone I respect a lot. His name is Corey Hamm and he's a piano professor at UBC."

Teaching is something that Matt enjoys deeply. He especially likes working with adult students and explains, "They're either starting at a later stage in their life or they started early on and they gave it up because of their career and then return to learning the piano again. I find that they have an intrinsic interest in playing the instrument so I enjoy talking to them about music appreciation, music theory and history along with the music that they're playing."

The rise of music streaming and online entertainment is one of his major concerns about the musical environment in Canada. Matt says, "People don't buy CDs any more. People stream things for free and there's so much entertainment online that people aren't going out to see live music. I think as musicians we have to present concerts in different formats that appeal to the audiences of our generation. We also have to educate people about music in better ways. You can't appreciate something without understanding how it works. Musical education is an important part of keeping the arts alive."

There are several sources of inspiration for Matt as a composer. He says, "I do a lot of performing as a pianist. I like being able to perform and compose. Being a performer definitely informs me as a composer and vice versa, so I'm glad to be able to do both. I feel like I can't live without both of those important parts to my life in the arts."

To learn more about Matt and his compositions, please visit him online here.

This profile of Matt Poon is based on a telephone interview that was conducted and recorded on March 8, 2017. 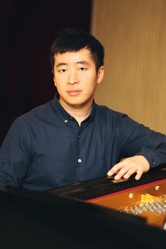