I talk to Peter Sotto of Quartetto Gelato about showcasing each quartet member's musical skills, the joys of working with different arrangers and how the group stays inspired.

Peter Sotto started Quartetto Gelato over 20 years ago with three other musicians who wanted to play for their own entertainment. He was a violinist with the Toronto Symphony Orchestra at the time and he says, “The four of us offered our services to a local restaurant. We didn’t do it as a money making experience, it was just for our own entertainment. The people really liked what we did and they kept on asking us to come back over and over. Eventually we ended up having quite a strong repertoire because of this.”

Peter explains that Quartetto Gelato is a personality--driven group and their repertoire is determined by the members of the quartet. Peter says, “The individuals in a group shine by doing what they do best. If there’s a certain type of solo that suits their playing, we exploit that. We’re a very organic group in that way.”

Each member of the group’s contributions start with a solid musical base. Peter says, “I’m a violinist and a tenor. I enjoy playing gypsy music and I have a very broad range of different styles that I wanted to perform. I’ve also studied opera and had considered a career as a tenor so I also wanted a vehicle for which I could start singing.”

He continues, “We have Alexander Sevastian who is the four time world accordion champion so obviously we have to showcase his playing because he’s a god of accordion. He’s literally one of the greatest accordionists alive.

We also have Colin Maier who is a brilliant, virtuosic oboist who plays showpieces that very few oboe players can play. Colin also plays fourteen other instruments very well. Our cellist is Liza McLellan and Liza is a seasoned chamber music player and soloist so we feature her quite a bit.”

The quartet’s arrangements are done by a broad range of different people. Peter points out, “We use arrangers the same way we use the personalities of Quartetto Gelato. If an arranger is particularly good at arranging jazzy pieces then we’ll use that person for jazz pieces. Some arrangers are better with classical, some are better with gypsy music so that’s how we choose them.”

Recording with Quartetto Gelato is something that Peter questioned at first. He says, “Quartetto Gelato is really based on performance and I thought that was the essence of the group so I wondered what we’d be able to do when we finally got behind a mic, but our CDs have sold very well. We’ve sold over 150,000 CDs to date. We’re still selling quite well in a climate that’s not really great for recorded music.”

The decline in the recording industry is one of the challenges that Quartetto Gelato faces as a group. Peter elaborates, “iTunes has diminished CD sales and I think that’s a bit of a tragedy. People don’t have stereo systems in their homes any more and digital music is a degraded form compared to the LP or the CD. It’s the first time technology has taken a step backwards with music.”

He continues, “I feel that music loses its identity when it’s just a little digital segment of somebody’s large digital collection. It’s very easy to miss the music. There isn’t the same attention paid to particular pieces that there used to be, so people lose the emotional context unless they come to a live performance.”

In the future, the group plans to release more albums with all original content. Their most recent album moved in that direction and Peter says, “We’re really quite thrilled about the album. We’ve commissioned pieces from people we’ve worked with before. Hilario Duran did a Cuban suite, Michael Occhipinti did a Sicilian suite and Rebecca Pellett did one piece that echoes the style of Ennio Morricone and it’s very beautiful music.”

Peter’s inspiration is fueled by the other members of Quartetto Gelato. He points out, “My group are the closest people to me. I think that very few people can say that about their groups. This current quartet has been together for eight years and they’re my very best friends. I enjoy touring with them so I’m really in my comfort zone when I’m with them. It’s very nurturing!”

To learn more about Quartetto Gelato and their music, please visit their website here.

This profile is based on a telephone interview with Peter Sotto conducted and recorded on Feb. 9, 2017. 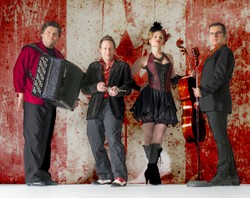