I talk to Wolf Willow's steel guitar player Moose about their passion for neglected styles of country music, their process of creating new music and where they find inspiration.

Wolf Willow’s steel guitar player Moose explains that the band started after its founder sought out to fulfill her fantasy of fronting a band. He says, "Dingy Colette grew up in Darston, Saskatchewan in the Rural Municipality of Slipper Butte. She gathered a bunch of people from the R.M. and put together this band to focus on playing the traditions of country that aren't well represented in the roots/country world like Western swing."

Moose adds, "Dingy Colette was fronting the band until she got a big radio contract in Timmins, Ontario hosting her own radio show. We've had personnel changes but the band is still all made up of people from the RM of Slipper Butte. Mitsy Muller is now fronting the band and doing a fine job.”

The current trend in the roots country world is "beards and banjos" as Moose puts it but Wolf Willow, he explains, draws on different traditions including Western swing. He goes on to say, "We're also trying to bring back more of the honky tonk elements like you might have seen with Buck Owens and The Buckaroos. Our drummer Slick Steve has an encyclopedic knowledge of Hee Haw episodes from 1981-1984. The rest of us are real geeks for the old Buckaroo show."

The band’s two songwriters are Moose and Stoneface Stanley who had a fascinating career as a minor hockey player before embarking on his musical journey.  Moose says, "I spent a lot of time traveling the roads in the rural parts of Saskatchewan so I write story songs. Stoneface Stanley writes songs in a classic love song kind of vein. We write the songs but having Mitsy interpret them and bring them to life in a different way makes for an interesting dynamic.  In a lot of projects the band is the person is the songwriter is the singer. We're more about being a collective."

He adds, "It's the same way with arranging too. For example, I'll sit down and sketch out a horn part and the horn players will take it and turn it upside down, this way and that and collectively we'll end up with something we're pretty proud of."

There's a hunger for the type of music that Wolf Willow is offering in Moose's opinion. He points out, "In these days of iPhones and people spending all their time on Facebook, this kind of music is really about people connecting socially and evoking nostalgia for this older style of music. We're trying to bring back an art form that's 50 or 60 years old but I have a feeling that there's going to be lots of people coming on the journey with us."

Saskatchewan's roots music scene is strong in Moose's view.  He says, "We're seeing a bunch of younger groups who are really pushing it forward. For example, Kacy & Clayton just opened for Wilco at the East Filmore down in San Francisco. Lots of these bands are doing really well so the scene and the appetite for this music is really strong."

One observation made by Moose is that opportunities outside of the usual folk festivals and indie music events are beginning to present themselves. He says, "A brewery opened in Swift Current and they wanted to throw a party so we played at that event. We got asked to play a barn dance last August in Saskatoon. We're going to see more of this hunger for roots music in the sense that people want things that reflect nostalgia. I'm not talking about nostalgia in a pejorative sense but about nostalgia that reflects a desire to be connected and slow down."

The band's latest album is one of which they are proud. They researched some of  their favourite records made in the Quonset Hut on Music Row in Nashville. Moose explains, “It’'s where Patsy Cline and Roy Orbison made a bunch of their records. We got a hold of some similar equipment to what they would have used and set things up the same way they would have. It gave us a really natural sound and it elicited a real performance that you don't get when you have a bunch of people isolated playing through cans, so we got this record that sounds alive like all the records we love."

As part of their belief in promoting things that are tangible, Wolf Willow is only releasing the album on vinyl with a few digital teasers to give audiences a feel for the recording.

In the immediate future, Wolf Willow is going to be launching the new album. Moose says, "We'll do some festival dates and things over the coming summer. We want to focus on putting the record out there and really taking advantage of playing to those crowds. There's the festivals and the bar gigs are one thing but it's these other situations where people have that need for music. Music should serve a purpose other than itself, so if it gives people an opportunity to come together and feel connected, that's really important to what we're trying to achieve."

One major source of inspiration for the band is their passion for the music that they play. Moose points out, "Part of the inspiration comes from this particular sector of old country music. For example, our drummer Slick Steve was just down in Nashville and he called us up and was so excited because he was watching Willie Cantu play. Only a certain fraction of a percentage of people know that Willie Cantu played drums for Buck Owens and the Buckaroos between1964 and 1968.

Another inspiration for Wolf Willow comes from the sense of yearning for something lost. Moose reflects, "One of my favourite theories on country music is that people who'd left the rural areas and migrated to the cities in the post World War II era had a nostalgia for what they’d left behind. Given the pace of change in the last 20 years, I think we need to pull from the past to fill that hole in the heart that we all have."

This profile is based on a telephone interview with Etienne Soloudre conducted and recorded on Nov. 17, 2016 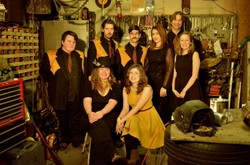