The June Bugs combine a love for traditional folk with swing, blues and other musical influences to create a sweet acoustic music cocktail.

The June Bugs are a Calgary band that ranges across the territory of folk, traditional country music, bluegrass and even swing music. The group’s unofficial leader, Renay Eng-Fisher, explains that the band started when she made contact with several women at the Foothills Acoustic Music Institute camp. She says, “We just started singing and playing together and I thought that it might be great to put a little band together with them. The band started seven years ago. We’ve had several people come through the band but Sue Ann Borer and I have always been stable in the band.”

The core of the band’s musical focus is determined by their desire to keep the flame of acoustic music alive. She says, “We love the traditional music so we wanted to keep folky, rootsy, bluegrass and country music going.”

Eng-Fisher’s musical influences extend from Alison Krauss and Laurie Lewis to Maura O’Connell. She also mentions artists like Mary Gauthier and Iris Dement as people whose song writing has had a strong effect on her. Musically, she is a devotee of Roy Husky Jr.’s bass playing of which she says, “I’ve got years to go and I’ll probably never reach his pulse but I try to reach for his level.”

The entire band takes responsibility for bringing music and songs to the table. Eng-Fisher explains, “Sue Anne wrote a beautiful song which is on our CD 'Just Here To Sing'. Everyone penned an original song for that CD. Tim Babey was nominated for the Gospel Music Association of Canada awards and he writes beautiful songs. Leanne Copithorne fronts her own band - Elbow River - and she also does a lot of open mics. Scott Duncan plays with us and he was featured in The Revenant. He also plays with Steve Fisher’s1 band.”

She adds, “You’ve got five personalities injecting their own tunes into the repertoire. Over the years we’ve had some wonderful tunes that we’ve all learned which we’d never have had if we stayed in or own little spheres. One of the criteria in the band is that we all bring things we’ve been working on and that’s how the group evolves.”

The biggest challenge for the band is that it represents a passion project for the members. Every one of them still works in other capacities so finding the time to tour, rehearse and come together is difficult.  However, they are all dedicated to keeping the band moving forward and making music as much as possible. Eng-Fisher says, "The June Bugs take the time to rehearse once a week. Touring is more difficult due to our various job commitments, but we hope to do 2 to 3 tours a year."

As for the band’s plans in the future, Eng-Fisher is committed to continuing with the music making.  The band has a chance to go to the Folk Alliance festival as an Alberta band in 2017. She also hopes to get a spot in order to expose a broader audience to the June Bugs.  She adds, “With my business taking off, I don’t have a lot of time for touring but I hope we can tour six or seven times throughout the year. Everybody hopes that when we play our music, it would be heard and liked and garner new fans all the time.”

Ultimately Eng-Fisher says that making music is about connecting with the people listening. She says, “The June Bugs want to make music that presents a sound, evokes some emotion and then strikes a chord in someone so that they understand what we're trying to say.”

This band profile is based on a telephone interview conducted with Renay Eng-Fisher on Monday, March 21, 2016 and recorded at that time.

1. Steve Fisher is a Calgary-based guitarist who fronts The Steve Fisher Group and also plays with Restless Lester which is a bluegrass band. He's also Renay Eng-Fisher's husband. 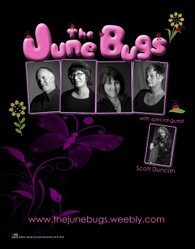