Magnolia Buckskin started out as a passion project and has grown into a band with two albums under their belts. Kathy Cook is the band's mandolin player. She talks about how the band first got together. She says, “Emily was in a band called The Fallen Angels. When one of the girls left, they wanted to keep playing so they asked Natasha and I to come down and play some tunes with them to see how we gelled. It went really well so they decided to keep us both. Shortly after that, we decided we should make our own name and start another band.”

The name they ended up with was Magnolia Buckskin which is the name of a race horse. Cook says, "One of the girls was working for a horse magazine and she said, ‘I always liked the name Magnolia Buckskin!’ and we all said 'Yes!' She’d only been joking but we decided to keep it because we liked it.”

The band strives for a rootsy, down to earth sound in their music. Cook mentions the late Ron Casat’s observation that folk music is the music of the people, not big business or corporate agendas.  She adds, “We write our songs about everyday life. We write about relationships, people and quirky things that happen. It’s pretty honest stuff and I guess that’s what appeals to us.”

Each member of Magnolia Buckskin is a multi-instrumentalist. Each of the women takes turns sharing songs on stage while the others back them up. This diversity is one of the band's strengths in Cook's opinion. She points out that, in a way, they are each the band's lead singer.

Emily Triggs’ father was a folk singer but she also listened to rock music growing up. Natasha Platt contributes a pop influence and has an eclectic approach to song writing with intricate arrangements. Corry Ulan has a classical piano background but also has an interest in bluegrass.  As for Cook herself, she says, “I toured with James Keelaghan and I was in country bands. I bring a bit of a bluesy flavour to the band.”

The song writing process is one of collaboration for the band. Each musician does other projects but when they come together, they share the experience of songwriting. Cook says, “We literally bring our songs to the table with snacks and tea and we each take turns, go around in a circle and we each bring songs forward.  We each take turns to work on the others' songs at that point.”

Cook talks about the alchemy that happens between the band members. She says, “I call it the breath of life. We'll each bring our words on paper and our individual voices and the girls will just add this incredible richness to it. It is just delightful.”

One major challenge for the band is that all of the members lead very active, busy lives so they need to find the time to rehearse, record and deal with the business aspects of the band. Cook explains, “Between hobbies, family and other interests we have to do a lot of juggling.  We’ve been through a lot together as a band. We listen to each other, lend support, sometimes a shoulder to cry on, and then get on with our work.”

She adds, “Sometimes rehearsal is the last thing we feel like doing but once we get there we end up laughing, having a good time and the magic happens.”

In terms of the folk and roots music scene, Cook has seen a melding of styles and a democratization of the music. She points out, “The melding of styles has made the music more accessible and more accepted. Music used to be divided into rigid categories but now with the Internet there’s more of a voice for the people. You can listen to other people’s music and how they play. I think that it’s more authentic now and more honest.”

The major goal for the band is to keep making music together. Cook says, “We just love playing music together and we’re all good friends. The band has been together for seven years and when we first started, we had no expectations. We did our first CD and got pretty good airplay. We got really nice feedback from it and we sold all of the CDs that we ordered and ordered more. We did another CD and we’ve recorded 28 songs so far.”

The inspiration and motivation for Magnolia Buckskin is the ability to create music together. Cook adds, “Even though we all have other projects, they don’t take away from the band. They just adds experiences that we can bring back and share with each other.”

This profile is based on a telephone interview with Kathy Cook conducted and recorded on March 27, 2016.

To learn more about the band, visit their website.

The BixMix Boys play dynamic, energetic bluegrass that draws from many eras a...

Gondola by mystery writer Donna Leon brings together a CD of Venetian folk music and pages of informative text on gondola origins and uses and relevant 14th to 18th century art.
26%  2   3 Krlmagi
Folk 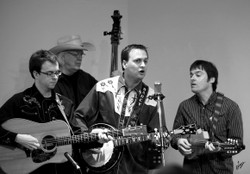 The BixMix Boys play dynamic, energetic bluegrass that draws from many eras and influences to create a rich sound.
Loading ...
Error!