5 on a String Bluegrass Band plays traditional bluegrass with flair and passion in the Vancouver B.C. area.

5 on a String was first founded in 1989 by a Vancouver area mandolin player named Carrol Oldenburg. Banjo player Gordie Sadler was one of the other original members along with guitarist Garry Stevenson. Their original bass player was a luthier from Alberta named Chuck Shifflett. When he moved back to Alberta, the band’s current bass player Dan Mornar took over. Eventually Carrol Oldenburg left the band so mandolinist Tim Eccles took his place. The band’s newest addition is fiddle player, Hugh Ellenwood, who replaced the band’s original fiddler about six years ago.

I spoke with Gordie Sadler, the band's banjo player, about the music they make and their passion for bluegrass. We started by talking about how he first became interested in bluegrass as a musical form. His interest in the music was first piqued by hearing the occasional snippet of bluegrass banjo on the radio. Sadler says, “When I first heard it, it caught my ear right away and I was totally interested in it but I didn’t even know what to call it.”

The next step in his musical evolution was watching “Bonnie and Clyde” which starred Warren Beatty and Faye Dunaway. For Sadler the real stars of the show were the bluegrass musicians he heard on the soundtrack. He explains, “I watched all of the credits to find out who was making that great music and it turned out to be Flatt and Scruggs.”

At that point, Sadler went out and bought a banjo from a pawnshop along with Pete Seeger’s book “How to Play the 5 String Banjo.”  He started out learning the clawhammer style of banjo playing that Seeger wrote about before graduating to the Scruggs-inspired three finger banjo style that lends so much of bluegrass its distinctive sound.

Sadler says that the other band members came to bluegrass in similar ways. For example, their guitar player, Garry Stevenson grew up in a musical family and was first inspired to play bluegrass after hearing Doc Watson’s brilliant flatpicked guitar playing.

While the band covers the occasional country tune or rockabilly song, they are most interested in traditional bluegrass. Sadler says, “For the most part, we try to form our harmonies in the old bluegrass style. We all have heard the changes in bluegrass and a lot of the modern groups are starting to sound the same. They have a really processed, countrified sound.  We like to keep it traditional as much as we can.”

Each band member brings songs that they’ve written or songs that they’d like to interpret to the table. At that point, the band tries the songs out. They’ll practice and play each song a few times and discuss it. If they’re happy to continue with it, Sadler says, “If it’s an original song, we’ll get the person who wrote it to record it in a rough form and send it out to us so we can work on it from home and work out some breaks so when we get together again we’re more ready to arrange the song.”

The band’s main arranger is their guitarist, Garry Stevenson. Sadler says he’s a good arranger who has suggestions that tend to work. He adds, “We do things democratically so if somebody’s really opposed to something we make concessions for that and if somebody really likes something we try and support that.”

One of the biggest challenges faced by the band is the difficulty of crossing the U.S. border in the last few years. Sadler explains, “We used to play in many of the festivals in Washington state and we used to enjoy going down there but nowadays you can’t do it. It is ridiculously expensive to go down there as a band. They seem to be saying that they don’t want any Canadian musicians down there unless you’re already a big star.”

However, the band has had some success playing in non-bluegrass related festivals. Sadler says, “It’s an emerging place for bands like  us to go. A lot of the smaller communities in northern and central B.C. have a special days or a weekend where they have a festival of some sort. We did quite a successful tour of Northern B.C. We played seven dates out there and a weekend festival in Burns Lake and that was a great time for us.”

Another challenge for the band is finding enough time to practice. Sadler points out, “People have busy lives and can’t find a date to get together but I’m sure a lot of bands have that problem. We like to practice every week but often times we’ll only get one in a whole month.”

The band is always striving to play to a higher standard and improve their sound. Sadler says, “We did a record last year to celebrate our 25th year and we’re really proud of it. It came out sounding better than anything we’ve ever done. We just want to keep doing what we’re doing and make a better band. ”

Making music is what keeps the band inspired and motivated to keep going forward. Sadler says, “ There’s nothing more satisfying to me than playing a show where you know you’ve reached out to people and they’ve heard what you’re trying to say. You come off the stage and you’re floating in midair because you know the show’s gone really well!”

For more information on 5 on a String, visit their website!

This band profile is based on a telephone interview conducted with Gordie Sadler on April 7, 2016 and recorded at that time. 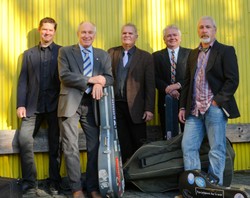