The Doll Sisters combine skillful musicianship and intelligent songwriting with intertwining vocal harmonies to create a unique sound all their own.

Jenna Leigh and Shelby Doll grew up in a family that listened to and loved a diverse range of music. They always wanted to learn how to play instruments and both of them started out singing in church. It was natural that they’d become professional musicians. Jenna explains, “Our grandpa was in a band and when he’d go to perform somewhere he’d ask Shelby and I to come along and play a couple of songs during their concerts. We started getting asked to do other events by other people and from there it just kind of snowballed. “

Shelby adds, “As we grew older we realized how much we enjoyed doing it and how much we wanted to do it. Our music grew along with us and that’s been a really great experience.”

The sister’s grandparents immigrated to Canada from Ireland and that rich heritage of Celtic music has been a strong influence on their music. They also cite Alison Krauss, the Civil Wars and Gillian Welch as strong influences for their music. Recently they’ve been compared to the classic rock band Heart and Jenna points out, “Heart has now become a big inspiration. I’ve always enjoyed listening to classic rock like AC/DC and Led Zepplin. We want to incorporate more rock elements into the next album that we record.”

The majority of the songwriting duties are handled by Shelby. She draws her inspiration from history and traditional stories. She says, “I know a lot of songwriters write about their own lives but I haven’t done that very much. I really like telling stories and creating something new. I’d love to keep going in this vein and I think other people should try it too. It’s really a great way to get ideas!”

Jenna helps her sister to brainstorm ideas and is also involved in arranging the music. She explains, “She’ll bounce ideas off of me. I’m a huge part of arranging the songs because I play the guitar. It’s definitely a joint effort for the final product.”

Shelby jumps in to say that she’s always excited when she finishes a song and takes it to Jenna. She says, “She starts playing it on the guitar or the mandolin and all of a sudden the song comes alive and becomes even more than what it was before.”

Strong instrumental performances are another part of the Doll Sisters music. Jenna plays banjo, guitar and bodhran while Shelby takes up the musical duties on fiddle and mandolin. Shelby laughs and says, “Jenna is definitely a better instrumentalist. She can pretty much play anything but I’ve cornered my mandolin and my fiddle and not allowed her to touch them.”

Jenna is keen to add that they share their musical roles evenly.  She continues, “We look at the vocals, the songwriting, the melody and the instrumentation and try to make sure everything is the best it can be before we present a song to the audience.”

Both sisters share the conviction that folk music is on the edge of a new renaissance. Shelby says, “I’m seeing a lot of people who are trying to revolutionize the folk music genre and add a little rock influence or even some pop sounds. I think people could see that as being a negative thing but I think that in order for folk music to continue growing, it needs to change and evolve.”

Jenna goes on to say, “I’m seeing a huge growth in the popularity of these styles of music. It’s really great and it’s a bit overwhelming because there’s more competition but I personally feel that we’re in a space where there’s a lot of opportunity for us right now.”

The biggest challenge for Canadian musicians is the sheer size of the country in Shelby’s view.  She says, “Touring is a bit more of a pain. You have to travel a lot further to reach an audience and it can be more difficult to get them out.”

The current economic downturn is also presenting a challenge for musicians. Shelby adds, “It can be difficult because people are struggling financially. It’s harder for them to go and spend money on a ticket.”

On a positive note Shelby points out, “I’m so proud to be a Canadian musician and to be inspired by the land, the people and the culture. Our government is pretty supportive of artists. We can apply for grants to help support our tours and recording. A lot of places don’t have that or they don’t have as much of it.”

The Doll Sisters’ future plan is to be able to support themselves fully with their music. Jenna also elaborates on the new album they’re working on and says, “We’re in the very early planning stages for it but we’ve been writing a lot. Our music’s evolved since we did our last album. It’s definitely going to sound like a Doll Sisters record but it’s going to have some new twists on it.  It’ll be a little bit more raw and a little more gritty hopefully.”

Inspiration is a necessary part of every musician’s career. Jenna draws inspiration from the sensation that comes during a performance when everything falls into place. She says, “After all of the hard work is done, the song is written, you’ve learned your part in the song and you’re standing on stage, you’ll have this moment where you feel like you’re doing what you’re supposed to be doing.”

She adds, “There are times that I want to quit because it’s so hard to be a musician, but then I think back to that experience and remember why I’m doing it and what I’m getting to share when I go on stage and do these songs.”

The inspiration for Shelby also comes from the way she can connect with the audience. She says, “It’s really amazing that you get an opportunity to give a piece of yourself to an audience and have them appreciate it.  I get inspired by that every day.”

For more information on The Doll Sisters, visit their website here.

This profile is based on an interview with Jenna Leigh and Shelby Doll that was conducted and recorded on April 13, 2016. 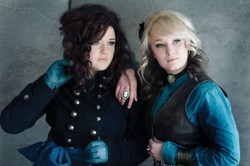