I talk to Rob Dickson about how he creates, where he draws inspiration for his music and where he wants to go in the future.

Music is a thread that has wound itself through singer-songwriter Rob Dickson's life since he was a child. Both his father and step-father played guitar and Rob sang a lot in church and at home with his family as a child. Later in high school, Rob realized that he could write his own songs. He says, "I started listening to a lot of DIY music and it occurred to me that you could make your own records, instead of just listening to other people's music. My step-dad had some old recording equipment that I'd mess around with, so I first learned to record that way. It was a small four track recorder and I use to record guitar and vocals, then do overdubs on it and mess around with effects."

His current approach to making music has been informed by the band with which he's working. Rob says, "My first full length record ‘Proof of Our Years’ that was released in 2016 was very much an intimate, solo record. I wrote all the songs myself and I wasn't in a room with a band rehearsing songs. I think my next one might be more of a band record, so that's informing the music. In general, a lot of my songwriting inspiration comes from my family and my life as well as the disturbing political climate we live in."

The process that Rob goes through to craft his songs begins with the lyrics and music separated. He explains, "Basically I write lyrics whenever I have time to myself. I often bring a pad of paper with me when I'm traveling because that's when I have a good chunk of time with my thoughts to formulate some poetry or lyrics.

He continues, "I often play guitar in the little bits of time I have between finishing the dishes and going to bed. If it sounds like something that could turn into a song or if a couple of parts fit together nicely, I'll record them with my iPhone and work on them later. Lately, when I have an outline of a song that feels right, I'll bring it to rehearsal with the band. We'll kind of jam it out and feel it out together."

He has a great deal of praise for his current band and says, "The folks I’ve been playing with most lately, Micah Smith and Jordy Walker, make a really tight rhythm section on bass and drums. They share a lot of the same musical inclinations that I have so it feels really natural to play with them."

Although Rob is passionate about making music, it isn't his full-time job. He elaborates, "I work as an engineer and in my spare time I work on my music. It's something that I'm passionate about and I wish that I could make it work full time, but I feel really fortunate to have the support that we have in the Yukon for music."

One aspect of the independent music scene with which he takes issue is the lack of venues for people to go and see live music, outside of the bars or clubs. He points out, "There are a lot of people making records in the their basements and going on tour and finding that unique audience is hard. I hope that in the future there will be more alternate venues where people can go to have an intimate and unique experience and maybe find out about an artist they’ve never heard of before"

He adds, "I’ve heard from friends that in Europe that they're a lot further ahead with this sort of thing. People are able to access these small communities of music lovers who'd spent a small amount of money to sit in a park or a bookstore and listen to you play. I think there are more established music communities there that can support those kind of activities and support artists in that way."

Rob's future goal as a musician is to record more albums and continue to find opportunities for more live performances. He adds, "I'd love to have the opportunity to travel a few times a year to play in front of audiences outside of the Yukon. It would be great to have more chances to do that. I guess I hope that with more time and more playing, my audience will continue to grow organically."

Rob wants to make records that can stand on their own. Rob says, "I want someone to pick up one of my records in Toronto and feel like it isn't only reflective of life in the Yukon, or specific to my life only or something. I want it to feel  relevant on a broader scale. I try to be mindful of what's going on culturally and produce work that feels important to me in some way."

Writing new material is one of the things that keeps Rob engaged with his music. He says, "I feel like continually writing songs keeps me challenged. To me songwriting is about taking little strands of ideas out of the air, feeding them into each other and trying to package them in way that sounds right.  It's pretty weird and pretty challenging and I think that's what I like about it."

For more information on Rob Dickson, please visit him here.

This profile of Rob Dickson is based on a telephone interview conducted and recorded on May 3, 2017. 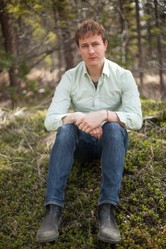