Who is George Chapman, and could he have been Jack the Ripper? The Tames Torso Murderer? And perhaps also the Borough Poisoner?

From 1888 until 1891 there were a slew of murders in Whitechapel, a section of East London left almost entirely poverty stricken after the industrial revolution. The most famous of these murders were attributed to Jack the Ripper, the first known serial killer. Shortly following the Ripper murders, a second serial killer arose, the Thames Torso Murderer. No one was ever convicted in either case. In the spring of 1903, George Chapman was arrested under suspicion of another string of serial murders, that of the Borough Poisoner, but was only convicted of a single murder. As we follow the life of George Chapman (Gordon, p. 187), it seems plausible that he may in fact have been all three killers.

George Chapman, born Severino Klosowski on December 14, 1865, was raised Roman Catholic in Nagornak, Poland.  At the age of fifteen he began training to be a feldscher (combined occupation of barber and surgeon).  By nineteen, Klosowski had moved to Warsaw to study practical surgery at Praga Hospital.  It is speculated that his first legal wife became pregnant so he quit school to work and provide for his family, and it is confirmed that he spent the next two years working as an assistant-surgeon in Warsaw, Poland.  Just two days after acquiring his passport, a headless Torso is found in Paris, France, November 1886.

After failing to become a surgeon, though claiming to have a junior certificate, Klosowski moved to London in February of 1887, without his wife.  He took up residence in a crowded, crime ridden section of town, where he spoke Polish, Russian, German, Yiddish, and a little English.  He began working as a barber while posing as a Jew.  Klosowski also ran White Hart Pub near George Yard dwelling where he met his next future wife, barmaid Lucy Baderski.  In May, another Torso murder victim is found, this time in London.

Meanwhile in Whitechapel, the first suspected Ripper victims were attacked.  The first, Annie Millwood, survived a knife attack.  The second, Ada Wilson, is stabbed twice in the neck and survived, but soon died due to unrelated injuries.  The third suspected Ripper victim, Martha Tabram, is successfully murdered and found in George Yard building, the same lodging house where Klosowski was staying. Martha was said to have ‘fits’ when she drank, and was known to frequent White Hart Pub, located around the corner from the lodging house.  Klosowski was questioned multiple times about the Tabram murder by Inspector Abberline, and told the police his name was Ludwig Zagowski.  (A week later another Torso murder occurs, but the body will not be discovered for several months.)

Klosowski opened his own barbershop on Cable Street in late 1888.  Over the next year, there were four more murders, two possible late works of the Ripper, and two more Torso murders (Torso #1 identified as Elizabeth Jackson, Torso #2 named the ‘Pinchin Street Torso’). During this time Klosowski and his girlfriend, Lucy, moved in together and were expecting a child.  Hearing of his new success, his first wife (though they never actually divorced), moved to London to find him, and actually lived with Lucy and her husband through the summer of 1889.  Klosowski reported that his wife left him after the birth of his son with Lucy, and she was never heard from again.  It is speculated that the Pinchin Street Torso, found across the tracks from Klosowski’s barbershop, was in fact his real wife from Poland (Gordon, p.190).  A month after the Pinchin Street Torso was found (September), Klosowski married Lucy (October), and she complained that he often stayed out all night with no explanation as to where he had been.

Klosowski and his wife took a ship to America, arriving in New York City, two weeks after his eighteen month old son died of pneumonia.  They conveniently arrived just two days before the suspected American Murders of Jack the Ripper began.  “There is a coincidence also in the fact that the murders ceased in London when Chapman went to America, while similar murders began to be perpetuated in America after [Chapman] landed there,” said Retired Chief Inspector Frederick George Abberline (1903).

“Old Shakespeare” was the name given to Carrie Brown, a longtime brewery prostitute who was known to quote sonnets after a few drinks (Gordon, p.30).  Her body was found in her bed on April 24, 1891. She had been strangled and savagely mutilated at the East River Hotel in New York City, the lodging house where she took residence.  A housekeeper gave a description of the man she saw with Carrie Brown that night, he was about age 32, 5’8”, long skinny nose with a thick mustache, foreign in appearance, possibly German.

Klosowski and Lucy set up a barbershop in New Jersey, and Lucy continued to report that her husband went out late at night without explanation.  In August of 1891, Hannah Robinson’s body was found badly mutilated in Long Island.  By January, Lucy had accused Klosowski of having an affair, at which time he threatened to slit her throat and gut her.  Pregnant and scared, Lucy fled back to London. That same night, Elizabeth Senior was murdered in New Jersey. This was the third Ripper attack in America, and extremely violent.  The fourth and final American Ripper Murder took place in June of 1892.  A few days later Klosowski left America on a ship bound for London to reunite with his wife Lucy, and meet his one month old daughter, Cecilia.  They lived together for the next year until Lucy left and went to live with her sister in Whitechapel.

Klosowski was living alone, and working as a barber in late 1893 when he met Annie Chapman (She is of no relation to the Annie Chapman that was murdered by Jack the Ripper in 1888).  Annie lived with Klosowski for the next year and got pregnant.  Lucy came back and reunited with her husband, and they all lived together for the next few months until Annie left in December of 1894. A few months later Lucy left him for the last time.  He then took the name George Chapman.

By late 1895 Klosowski, now George Chapman, had begun to work in a new barbershop, where he met Mary Spink.  She had been estranged by her husband, and she and Chapman had claimed that they were married.  While he was working as a barber she was playing piano, something they called a “musical shave”. Chapman was said to have beat her often and quite severely.  In February of 1897 they purchased a sailboat called the “mosquito” which capsized on its maiden voyage and Mary almost drowned.  A few days later he was claiming to be single.  In April, Chapman purchased one ounce of tartar-emetic poison (antimony, similar to arsenic) from a local chemist, and began giving it to Mary Spink in small doses.  Tartar-emetic poison is a white powder that in small doses creates a slow and painful death, while preserving the body for years to come.  Mary passed away a mere skeleton in December, and that afternoon he opened the pub as usual.

In April of 1898, one year after Mary’s poisoning, Chapman took out an ad for a barmaid.  He hired Bessie Taylor and soon began to solicit sexual favors from her.  A few months later they were living as Mr. and Mrs. Chapman.  He had been beating her, though never in public, but was once seen threatening her with a gun.  Two years later Bessie died of poisoning.

By August of 1901 Chapman was seeking another barmaid, and hired 18 year old Maud Marsh.  Soon he had demanded sex from her, and they too began living as husband and wife.  He also beat her, and slowly began to poison her, this time documenting the process with photographs.  In June of 1902, while continuing to poison Maud Marsh he hired Florence Rayner as a barmaid and asked her to go to America with him, she refused.  A week later, a fifth and final Torso was found at Salamanca Place.

Maud Marsh died on October 22, 1902, the final victim of the Borough Poisoner.  One day later Chapman asked Maud’s sister to be his next barmaid.  Inspector George Godley arrested Chapman for suspicion of murdering his ‘wives’ on October 25, 1902.  It is discovered that Chapman, claiming to be an American, is in fact Klosowski from Poland, a fact Chapman refused to admit.  Inspector Abberline (Sugden, p.439) was reported to have said to Inspector George Godley at the time of Chapman’s arrest, “Congratulations – you got Jack the Ripper at last!”

The bodies of Chapman’s ‘wives’ were exhumed.  The bodies were very well preserved do to the poison and Chapman was charged with three murders.  There were no traces of poison remaining in the bodies, other than them being very well preserved, so they were only able to convict him on one murder, Maud Marsh.  It took the jury eleven minutes to come to a verdict of “guilty” on March 20, 1903.

After Chapman’s conviction, an article ran in the Pall Mall Gazette on March 31, 1903:

I cannot see why one man should not have done both, provided he had the

professional knowledge, and this is admitted in Chapman's case. A man who

could watch his wives being slowly tortured to death by poison, as he did, was

capable of anything; and the fact that he should have attempted, in such a cold-

blooded manner to murder his first wife with a knife in New Jersey, makes one

crimes. What, indeed, is more likely than that a man to some extent skilled in

and I still believe Chapman had a commission from America--came to an end, and

poisons? Indeed, if the theory be accepted that a man who takes life on a whole-

sale scale never ceases his accursed habit until he is either arrested or dies, there

is much to be said for Chapman's consistency. You see, incentive changes; but the

fiendishness is not eradicated. The victims, too, you will notice, continue to be

women ; but they are of different classes, and obviously call for different methods

Even on death row Chapman still refused to admit to his true identity or confess to any of his crimes.  It is evident that Chapman was the Borough Poisoner and had killed at least three of his ‘wives’.  Chapman’s moves from London to America and back again coincide perfectly with the timeline of the Ripper and Thames Torso Murders.  There is no doubt that Chapman certainly had the makings of a violent serial killer. Though the modus operandi changed somewhat dramatically between the three sets of killings, this is uncommon but not unheard of.

George Chapman, aka Severino Klosowski, aka Ludwig Zagowski, aka The Thames Torso Murderer, aka The Borough Poisoner, and aka Jack the Ripper, was hanged on April 7, 1903,
at a drop of six feet and six inches. 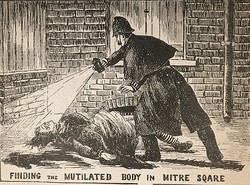 We've all heard about fingerprints and their use in criminal investigations but how have they come to be used so widely?
43%  4   4 janisleofwight
True Crime

How John Waller, highwayman and perjurer spent the last hour of his life.
Loading ...
Error!