Little Black Sambo: Is it Racist

Minstrel shows from 1830 to 1890 gave birth to mocking caricatures of slaves in America and carried this over to film and literature in the 20th century.

Children latch on to a favorite picture book and badger their parents to read the story over and over ad nauseam. They nostalgically carry their fondness for the book through their childhood and into adulthood and look forward to reading it to their children. "Little Black Sambo", by Helen Bannerman fulfilled that developmental pre-reading stage for generations of children starting with the first edition in 1889 .

In 1957, Sam Battistone Sr. and Newell Bohnett opened a restaurant in Santa Barbara, California and called it Sambo's, a name derived from the entrepreneurs' names. Before long, the restaurant became associated with the story of Little Black Sambo by Helen Bannerman. Sam and Bo, recognizing a capitalistic opportunity, began decorating the walls of the restaurants with scenes from the book. These scenes depicted a dark-skinned boy, tigers and a pale man called the Tree Friend, riding a magical unicycle. The original restaurant is still in operation today.

By the late 1970's, many Caucasian, adult, baby boomers, found their favorite childhood book, Little Black Sambo, being ripped off library shelves at the request of African Americans who declared it offensive; not only that, they wanted to toss the book's namesake, Sambo's Restaurant, into the fire with it. "This is censorship! Why are American institutions folding to such a request? What's so racist about Little Black Sambo?" cried the white boomers. They truly did not understand what the fuss was all about.

Four hungry tigers in India threaten to eat a young Indian boy named Sambo when he meets them one by one in the jungle. In return for his life, Sambo outsmarts the tigers by giving them one article of his colorful clothing. Each tiger saunters off proudly declaring to be the grandest of all. They eventually run into one another in the jungle and a fight ensues around a tree as to who is the grandest of all. They chase each other so fast that they melt into a pool of butter. Sambo not only retrieves his clothing, but he takes the butter home to his mother, Black Mumbo, who makes pancakes, and Sambo devours a stack of 169.

Although the character started out as an Indian boy living in India, in America, he evolved into a caricature of the African slave.

In 1932, Langston Hughes, an African American writer, declared Little Black Sambo as a typical "pickaninny" book which was hurtful to black children. The word "Sambo", means many different things around the world, but in America, it evolved into a derogatory term for an African American slave content with his lot in life.

Dr. Alvin F. Poussaint, a noted professor of psychiatry at Harvard Medical School, commented on a sanitized version of the book which retained the original title. "I don’t see how I can get past the title and what it means. It would be like . . . trying to do 'Little Black Darky' and saying, 'As long as I fix up the character so he doesn't look like a darky on the plantation, it's OK.'"

The illustrations of the Americanized Little Black Sambo compounded injury further by the caricature of Sambo which grew out of minstrel shows from the 19th century and early 20th century. These variety shows starred white people in blackface with flashy multicolored clothing, bare feet, and grossly exaggerated protruding eyes, enormous lips and inky-dark skin.

Our government can force busing on us, retail establishments and libraries can fold to pressure from various groups; publishers can remove "Nigger Jim" from Tom Sawyer's "Huckleberry Finn."  We can sweep history under the rug as if it didn't happen, but none of this can force us to like each other. In fact, it has the opposite effect.

So what can we do about "Little Black Sambo?"  After reading this article, do you now understand that the word "Sambo" started out innocently, but white America turned it into a pejorative word meaning the same thing as "nigger?"

Race relations in America is like a bad marriage: The wife expects the husband to read her mind, and the husband stubbornly resists change. It's time for dialogue between individuals. Blacks can explain what they find offensive and why. I didn't understand why "Little Black Sambo" was offensive until I did the research for this article. It's time for real communication through dialogue and openness to change on everyone's part.  Censorship is not the answer.

A Reading with Sanitized Illustrations

At my insistence, my mother read Little Black Sambo over and over to me. When I learned to read, I read it over and over to myself and my brother. I loved the way Sambo outsmarted the tigers. I especially loved it when the tigers turned into butter and Sambo got to eat a stack of 169 pancakes. I could taste those pancakes! To me, Sambo was a hero.

As an adult, I couldn't understand why my local restaurant, Sambo's, suddenly had a new name. No longer were there illustrations of my favorite picture book on the walls. "This is political correctness gone awry," I cried. It wasn't until I did the research for this article that I understood.  I checked my local library to see if they carried a copy of little black Sambo. They don't, but they do carry sanitized versions of the book:

The reviews of the sanitized Little Black Sambo books on Amazon garner quite a bit of criticism. Most reviewers recall fondly of reading the book as a child and include it among their favorite. They don't know what all the racist talk is about. Like me, they see a little boy who outsmarted the tigers and got to eat a lot of pancakes. He was a hero in their eyes:

And one disgruntled reviewer said this:

Here is what some African Americans are saying about Little Black Sambo:

Here is what Harriet Washington, an African American author, has to say about the book:

The Constitution of the United States of America

Congress shall make no law respecting an establishment of religion, or prohibiting the free exercise thereof; or abridging the freedom of speech, or of the press, or the right of the people peaceably to assemble, and to petition the Government for a redress of grievances.

I was surprised to see Little Black Sambo being sold on Amazon. I didn't get to read my favorite picture book to my own children. In reality, the book was never actually banned. It was removed through political pressure. Libraries pulled it off the shelves and book publishers quit publishing it.

Should Institutions and businesses have folded to the demands of African Americans, albeit a minority, to remove the book? No, that would be like removing all printed material, photographs and movies of the holocaust as if it never happened. We do not evolve as human beings by denying our history.

Although I now understand the offensiveness of the title and characters of the early American version of the story, I'm against treading on our freedom of speech and the press. Those are freedoms afforded to all races of Americans and we should preserve them.

I'd like to say to African Americans, and especially to Harriet Washington, that most white Americans truly do not understand what makes the book racist.

The Original Meaning of Sambo

A Name Misunderstood by All

After posting this article, a British reader offered this information:

"The ardent hunters of racism might like to know the origin of the name Sambo. It arose in Lancashire, England when an unnamed African slave boy died only a few days after arrival. The anti-racist locals felt deep sorrow for the boy and clubbed together for funeral. They didn't know his name, so they coined the name Sambo. It was not a racist name, because it was generated out of love. His tombstone, which can still be seen today, carries an antiracist message that people should not be judged on the colour of their skin.

cmoney, Thanks for the comment. It's interesting how misunderstandings occur among the races.

Honestly don't remember reading the book. But when I was growing up if you weren't black and called somebody "Sambo" you'd probably get the crap beat out of you. Haven't heard about Sambo in a while. I had forgotten it until your brought it up. :)

Thanks for the comment. It's still my favorite book.

Lots of great information and well-written--as kids we didn't think twice about any of it, it could have been any kid, anywhere to us. Bring on the pancakes, ha ha...

Thanks for the comment, John. As it said in the article, Sambo means different things in different cultures.

I vividly remember the book from my childhood. As a kid, I didn't really question things but I thought Sambo was very brave and clever to stand up to, and outwit, the tigers. He was also very greedy for pancakes. As I got older, I began to realise he looked African in the illustrations. I assumed the story was set in Africa but there are no tigers in Africa. That just made it all the more weird, as if tigers turning into butter wasn't weird enough. Now I know it was originally set in India, that explains a lot. I don't think the story is racist but you can't escape the fact that the name, Sambo, is offensive in a modern context. The illustrations were wrong too, at least in the edition I had. Having said that, he was the only black hero in any of the kids books I read in my childhood.

Great commentary on this fun book. It is a great story and am glad it's being reprinted and available for all kids to enjoy.

Thank you Katie. I enjoyed writing it.

If you read "Grapes of Wrath" by John Steinbeck or watched the movie, you kno... 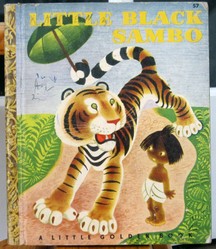 If you read "Grapes of Wrath" by John Steinbeck or watched the movie, you know the answer to that question.
100%  37   10 AbbyFitz
Other Social Issues