North Indian lassi, a beverage that is based upon a yogurt-like, fermented milk product, refreshes with many variations, such as salty or sweet.

Lassi (pronounced LAH-see) is a North Indian beverage that is created from dahi, a yogurt-like, fermented milk product. Dahi is translated as curd on the Indian subcontinent.

Mumbai-born, Punjabi-heritage Indian chef Garima Arora (born Nov. 9, 1986), who in November 2018 became the first female Indian to win a Michelin star, explains the difference between curd and yogurt. Curd is achieved by curdling milk with an edible acidic substance. A saved portion of already-made dahi may be used as a curd starter (known as jamun or khatta). Other edible acidic substances include green or red chilies, lemon juice or vinegar.

Lassi calls for a blend of dahi with a liquid, such as milk, rosewater or water, or with ice cubes. The addition of salt or of sugar determines whether the beverage is typed as salty (namkeen; from namak, "salt") or as sweet. Or, lassi may be both salty and sweet via pinches of both salt and sugar.

New Delhi-born cookbook author Suvir Saran points out the recentness of fruit lassis. He dates serving fruit lassis to the British Raj, the period of British rule on the subcontinent. The Government of India Act, passed Aug. 2, 1858, transferred rule of India from the East India Company to the Crown, personified by Victoria (May 24, 1819-Jan. 22, 1901), Queen of the United Kingdom of Great Britain and Ireland, as of June 20, 1837, and Empress of India, as of May 1, 1876.

During her travels across India, my sister enjoyed sampling different fruit lassis. Yet, lassi's original basicness, as a plain, salted or sweetened beverage, remains her favorite.

Although outcompeted by mangoes, peaches still find fans on the subcontinent. Reddy notes interest in extending the peach growing season, which peaks from early April to late June, by grafting a late-ripening, wild peach, known as katcheru, onto other peach varieties. Katcheru ripens in October. Fruit scientist Chiranjit Parmar (born May 16 May 1939) explains that katcheru's less desirable, sour taste might benefit from grafting.

Variations in lassi's ingredients exist. Yet, the essential purpose of lassi remains unchanged. Salty or sweet, fruity or not, lightly or muchly spiced, lassi always satisfies as a refreshing beverage.

Milk and yogurt proportions may be adjusted according to desired thickness.

sweetener (honey or sugar) to taste

Note: Sprinkling one-half to one teaspoon of cinnamon before serving makes a pretty garnish.

Serves 2 to 4, depending upon glass size.

My special thanks to talented photographers/concerned organizations who make their fine images available on the Internet.

Indian as Apple Pie @IndianAsApplePie. "Lassi: Slighty tart. Spiced. Thin. Yogurt drink. I remember asking my mother’s youngest sister - my massi - how they make it and why. She said it was a way to cool down in the Indian heat. And, proceeded to take yougurt and water in a tall steel glass and pour it into another and back again until it was super thin and frothy. Then, she sprinkled it with salt and black pepper. ‘That’s it’ she effectively said. We were in India in our kothi in Chandigarh - far from the sweet, syrupy mess we call lassi in the US. I wonder what she’d think of that version? We tend to make lassi at home. And, you can too! Plain, unsweetened Yogurt. Fresh mango. Frozen Mango. green cardamom pods. A touch of honey. Blend till smooth and frothy. It’s my daughter’s favorite snack. If you have homemade yogurt even better. Feel free to sub non dairy yogurts as well like soy or coconut yogurt as I like to do for myself. On the measurements? I have a recipe in my book Indian for everyone. Otherwise I just kind of wing it starting w. 2 cups yogurt." Facebook. June 13, 2019.

Indian As Apple Pie @IndianAsApplePie. "Watch me make a favorite in our house - mango lassi. More than just yogurt smoothies, lassis can be tart or sweet. They are very thin, spiced yogurt drinks used to cool you down especially in the prickly heat of Indian summers. This recipe for Mango Lassi uses plain, unsweetened yogurt (2 cups), 3/4 cup frozen mango, honey to taste, and a sprinkle of green cardamom pods. I usually make a huge batch for my 17 year-old, who drinks this like it's going out to style. These shakes were a great way to kick my kids' habit of Starbucks in the morning. Shakes and smoothies from coffee shops and the like can be loaded with unwanted sugar, food dyes, and other additives. If they are not (and read the labels and ask a lot of questions), they can be expensive. Keeping a Lassi on hand in the fridge has all but eliminated that expense for us but lets my kids enjoy something a little more interesting than just water or juice. For an exact recipe, turn to page 57 in my third book, 'Indian For Everyone'." Facebook. May 19, 2020.

Moyano, Carolina. "The Chemistry Behind the Fermentation of Yogurt." Food Unfolded. July 8, 2020.

Indian for Everyone: The Home Cook's Guide to Traditional Favorites by Anupy Singla

This product is eligible for Amazon Smile donation.

WriterArtist, Thank you for visiting and writing about your own experiences with lassi.
My sister has studied and traveled throughout India. So I know how lassi needs to look and taste. She knows that lassi is something that I look forward to every time we catch up.

I remember the Lassi of Punjab on my official tour to Chandigarh. It was awesome. Although it took me some time and effort to finish the glass. The creamy lassi was filling, the glass was huge for my small stature and the nuts were utterly ravishing.

pateluday, I appreciate that you mention lassi's excellence as a probiotic.
I agree with you and my sister about plain lassi with sugar and rose water; although my sister found differently fruited lassis to be delicious, her favorite lassi remains the beverage's prototype.
And, yes, lassi presents itself perfectly in large glasses.

Love Iced Lassi.. plain and simple with a dash of rose water and lots of sugar. Lassi is an excellent probiotic as well and in North India it is guzzled down large glassful!

I like the way one can have different variations, as though the name and basis encompase a wide array of drinks, each with appeal to different audiances.

North Indian mint raita (pudina raita) refreshes as the cucumber, mint and yo... 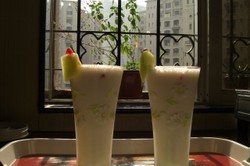 Indian for Everyone: The Home Cook's Guide to Traditional Favo...
100%  8   10 DerdriuMarriner
Indian Food 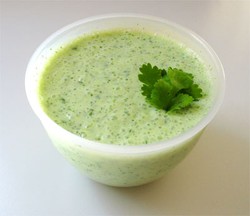 Classic North Indian chai is based upon distinctively flavoring black tea with a medley of spices to yield the subcontinent's regionally-varied class of tea, masala chai.
Loading ...
Error!