I talk to Jason Fowler about his passion for the guitar, balancing his solo and freelance music careers and the challenges that professional musicians face.

Jason Fowler’s first inspiration to play the guitar came from his father. He says, “My dad is a self taught folk and country music guitarist. He was always playing around the house, and I wanted to do that too. He showed me some basic things on the guitar that I could play at the age of seven or so. After about a year of that, my parents saw that I was sufficiently interested in the guitar that they got me some guitar lessons.”

He took group lessons for about a year and learned as much as the teacher knew, so his parents enrolled him in private lessons. Jason says, “I studied for about eight years with a guy in Toronto named David Hayes. He was a really great guitar teacher. I was already learning what I wanted to learn on my own, so he gave me the theoretical rudiments that one wouldn’t necessarily learn themselves because they’re kind of dry and boring. I learned how to read music, I learned chord studies and I learned how to play different styles of guitar.”

This foundational framework has proven useful in Jason’s career as a professional guitarist. He explains, “I had all of those reading skills and I could play lots of different styles, so it allowed me to not only perform my own music but to work as a freelance session guitarist.”

His influences run the gamut of great guitarists including Doc Watson, Bruce Cockburn, Ry Cooder and Norman Blake with many others in between. Jason elaborates, “Mark Knopfler’s fingerstyle playing was a really big influence on me. I also like really simple guitarists like Gordon Lightfoot and John Prine for the way that they accompany their songs. I learned a lesson from them: the music doesn’t have to be really complicated to get the point across, but it can be a little more than your basic strum.”

Jason strives for a balance between his freelance work and his personal solo career. He says, “It depends on what the work demands. I raised my daughter who is now 19 as a single father after I got divorced. The pressure’s off a little bit now that she’s grown up, but for many years having a house in Toronto and being a single parent, I went where the work was. I did my own music when I had the time and inclination, but I wasn’t soliciting a ton of work.”

He’s found fulfillment in his professional work. As he says, “I’ve mostly done acoustic guitar work and I consider myself to be a largely acoustic player.”

For the last sixteen years, Jason has been working with Irish tenor John McDermott. He says, “I’ve worked as his musical director for the last eight years. I find it really fulfilling to work on creating new arrangements for songs or re-working things that might have been recorded with piano and strings and coming up with an arrangement on the guitar that covers all those bases.”

As a solo artist, his creative process relies on inspired moments. Jason explains, “I’ve never been able to sit down with any regularity and write. The writing comes when it comes. There can be really fertile periods and other times it can be really dry. I write both songs and instrumental guitar music, so sometimes I’ll write a whole bunch of guitar music and not a single song or vice versa.”

One challenge in Jason’s career is letting people know that he’s still available to work. He says, “Having worked with John McDermott for 16 years people just figure that I’m busy all the time. They don’t realize that I have holes in my calendar and that I’m available for hire.”

The music business is one of stark contrasts as well. Jason elaborates, “A friend of mine plays with a really well known artist. One week he was playing at the Royal Albert Hall and the next week he was playing cocktail piano at a steakhouse in Toronto.  My life is much the same! One night I’ll be playing with Nana Mouskouri or John and the next week I’ll be sitting in at an open stage at a folk club in Toronto.”

The prevalence of streaming services and freely downloadable music is a concern for Jason. He says, “The younger generation has probably never bought music in their lives. Now they subscribe to streaming services and they have the world at their fingertips. It’s a strange model for those of us who’ve spent our lives working on a skill only to find that skill is considered valueless."

There is one potential bright spot. He points out, “The various arts organizations and the royalty collecting groups who advocate on behalf of people like me have caught up and collected tariffs on some of the music, so I have seen some revenue streams coming in. I just don’t know if it’s too late or not.”

Recharging his personal batteries takes different forms for Jason. He says, “I do a lot of reading. I ride a motorbike as my main mode of transportation so riding’s another way to recharge my batteries.  I practice yoga several times a week and I find yoga really helps my guitar playing because it helps me to breathe properly.”

He concludes, “I know a lot of full time musicians who don’t play for enjoyment when they aren’t working. I find that strange. First and foremost, I love the guitar, so even if I don’t have a gig, I still play every day.”

For more information on Jason's music, please visit him here.

This profile of Jason Fowler is based on a telephone interview conducted and recorded on June 14, 2017. 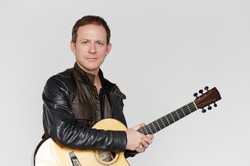