I talk to Rebecca Binnendyk about her passion for making music, the joy of sharing music with her fans and her personal inspirations as a singer.

Rebecca Binnendyk started singing in church and in a children's choir as a small child and she hasn't looked back. She says, "I was a very little girl, three years old, when I started singing. I sung and competed in festivals and with choirs through public school and went professional when I was 18."

Being true to herself as an artist is Rebecca's main goal right now. She says, "I don't tend to fit into any given genre. My goal is to put authenticity out into the world through music. A year ago, I was working five jobs and music was only one of those jobs. The others were pretty much funding my music, but that makes it difficult to be fully concentrated on music so I've cut back on the other jobs. I'm doing just one online company and focusing on the music. I take singing and volunteering opportunities when they arise and it's been an amazing adventure."

Her last album entitled Some Fun Out of Life is a showcase of why she is passionate about making music. Rebecca explains, "I was going through some tough times but I didn't want to put out negativity and sadness. I wanted to say that there's still a lot to be grateful for, there's still things to be happy about and ultimately there's always hope. I wanted people to hear the music and leave snapping their fingers and tapping their toes."

She adds, "I still think that's what I'm trying to do. I've recorded five original songs now and they're a little more raw. They have a little more grit to them and they're more ‘pop’ as far as style goes, but it's still about expressing my emotions. They're very much about real life."

Although she's only recently started song writing, Rebecca is enjoying the process. She says, "I did the Song Studio workshop in Toronto. I met a talented guy named Rob Shiels there. He's from Ireland, so when I made the move to explore Europe I took a week there to write with him. I isolated myself for six days and wrote with some really great writers. We've been very happy with the four songs we wrote that week and they've already been recorded."

She continues, "I'm much better at collaborating in song writing because I'm just starting out and I'm quite willing to admit that. I'm good at working in groups and I love bouncing ideas off of others, sharing our own musicality and seeing what comes out of it."

The recording studio is a second home for Rebecca. She says, "I absolutely love the creative energy of the studio. There's a lot of honesty that happens in there. It's very expensive to go into the studio with the right people, but it's so worth it in the end. It would be more of a heartache for me if I didn't put the songs out into the world than if I saved my money and wasn't true to myself."

The session musicians with whom she's worked also come in for praise, as does her producer. Rebecca says, "Studio musicians just lay down the best tracks and bring great ideas to the table. I'm always humbled to be around so much talent and artistry. John Bailey is my producer and, wow, I can't say enough about how great it is to work with him."

Sometimes Rebecca's most enthusiastic audiences are found in the most unlikely locations. She says, "My brother's living up in Grande Prairie and I thought that if I was in the area, I might as well do a show. Maybe a way to help pay for the flight! The vibe and the energy from those Albertans blew me away. It was one of my favourite shows because they weren't all jazz cats analyzing every chord. They just appreciated and loved the music. I sold all of my CDs and I still have a smile on my face!"

It's important for her not to be limited to the Canadian music scene so Rebecca has an international focus. She says, "I've always had a spirit of travel. In the next two months, I'm in Amsterdam, Malta and then Uganda for a month sharing music and coaching an African children's choir. I wouldn't want to limit myself to Canada. The world is getting smaller so for me nothing is out of reach if the opportunity presents itself.”

One challenge that she identifies in her career is getting her music out to the world. Rebecca points out, "The biggest challenge that I have right now is probably the marketing and distribution of my music. I want to find the right contacts in the industry so that a song could actually go somewhere, be it on a TV show or maybe even film. I just need the right people to hear my stuff and believe in it.”

Rebecca is excited for the future of her musical career. She says, "I'm on a really cool path of recording, writing and collaborating with other people in the industry. My aim was never to be famous. I just want to be a real person in the real world. When I have moments where I just want to quit, I get on stage and I realize that it's where I'm supposed to be. Even though the money and the cost of being a musician gets in the way, you have to overlook it. The music is hopefully bigger than that."

Keeping inspired is easy for Rebecca. She says, “I find inspiration in the people I meet and in the stories that are told to me. We all have a different story and it's so inspiring when somebody's life touches mine and I can express it creatively through my art.”

Rebecca concludes by saying that she is mostly deeply inspired by the messages and comments from her fans who talk about the effect her music has on them. She says, “For example I got an email that read, ‘I'm a 35 year old lumberjack in B.C.. I just listened to Smile and I'm bawling. I haven't cried like that in years.’ If that's what my music's doing, it's worth it.”

For more information on Rebecca and her music, please visit her website here.

This profile of Rebecca Binnendyk is based on a telephone interview conducted and recorded on Jan. 26, 2017. 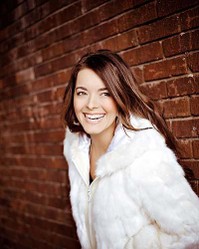