Canadian singer Rebecca Binnendyk is in the process of creating a new album to showcase her own original songs.

Canadian singer/songwriter, Rebecca Binnendyk has launched an Indiegogo campaign to help fund the recording of her original songs. She talked to me about why she’s taken on this project, the songs she’s written for it and why she wants to bring it to fruition.

The songs she’s written are very personal and represent a deep exploration of her interior landscape. Rebecca explains, “These songs are about my life experiences. I've been around the world, taught in Uganda, had relationships, been in and out of love -- what's not to write about?!”

Rebecca talks about two of her favourite songs in detail. The first song is entitled Brick by Brick about which she says, “It’s about a physical and hypothetical wall. A wall that can grow between family members or friends but also between races and countries and genders. It's a reflective song contemplating whether or not the wall is too thick to break down.”

The other song is entitled I Don’t Belong to You. Rebecca talks about it and says, “This one relates to the idea that we are our own beings. No one owns us and we have to declare that. We have to do what feels right for us and not worry about what others think. It talks about not being bought at a price and made to do things you don't want to. It especially speaks to women that we are not possessions to be purchased by money, authority, materialistic possessions etc;”

Songwriting really started for Rebecca during Toronto’s weeklong workshop called Song Studio. She says, “I connected with a song-writing production team from Ireland. So, I went there twice and wrote with various talented artists. I also met Dan Hill at Song Studio. He and I have been writing together this past summer. We are ready to record two songs in January if the project reaches it's goal. He has TV/film supervisors that he can give the music to if I get it recorded, so there's some exciting avenues. Maybe a Netflix show will pick up one of the originals. Something like that would be incredible!”

The songs, while personal, also resonate with a wider audience. Rebecca points out, “I think when any artist bears their soul and their real thoughts, people can see that it's honest and authentic and they like that. People hear the passion in my vocals and hear in the lyrics that this is coming from real experience.

am passionate about sharing it because I want to encourage people. I want them to think and contemplate their own lives, but also just want them to enjoy really good, high-quality music. I've also included videos that talk about some of the songs on the campaign page. I've been very honest and open about them so I hope people see that!”

Rebecca has such a strong sense of commitment to the project that she’s invested $8,000 of her own money into it. Rebecca says, “This project is all or nothing. I just need some support from music lovers around the globe. I have backers from many countries I've visited which is so encouraging. It’s nice to see people supporting independent artists.”

If Rebecca gets the Indiegogo funding that she needs, she intends to record an entire album of originals and original arrangements. She says, “It's a dream to record with an orchestra for Brick By Brick. I have an arrangement written by Charles Cozens (who has written for Elton John in the past) so it's really good and ready to go, we just need the funding. I would also love to do a second music video to one of my originals. I have a marketing plan as well, so that’s all detailed on the campaign page.”

There’s a message at the heart of the album that she wants to share. Rebecca says, “Be the best person you can be.  Failures only lead to success.  Never quit.  Don't worry about what people will think of you. Do what you love!”

To learn more about the project, please visit: https://igg.me/at/rebeccasoriginalrelease/x/8929776 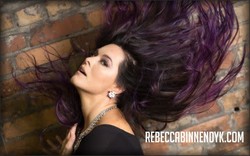