Return of the Gilded Age

The robber barons of the Victorian Age made their billions on the backs of the poor; some see a parallel in how today’s executives get rich

They built summer cottages with 70 rooms on the Atlantic seaboard. They lived in 250-room mansions on the Hudson River. They held formal horseback dinners at Sherry’s Restaurant in New York. They bought their dogs gem-studded collars. They turned up to banquets in gowns adorned with a quarter million dollars worth of jewels. “They” were the Rockefellers, Carnegies, Vanderbilts, Morgans, and other industrialists who made billions during the last 30 years or so of the 19th century and the early years of the 20th.

The capitalist titans that dominated America in the late 19th century were clearly the targets of Mark Twain’s wit. The likes of John Jacob Astor, Marshall Field, and Jay Gould were called robber barons, and they got that nickname for good reasons – it was descriptive of how they amassed their fortunes.

An article in The American and Continental Monthly did not hold back in its criticism of the way in which industrialists were becoming rich: there was “a breeding up [of] a race of trading sharks and wolves, which will eventually devour us all. Honesty will go altogether out of fashion, and respectability be associated with a defect of intellect…The old robber barons of the Middle Ages who plundered sword in hand and lance in rest were more honest than this new aristocracy of swindling millionaires.” 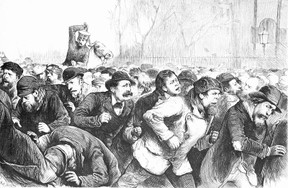 They ruthlessly and violently beat back efforts by trade unions to get a decent wage for workers. The Tompkins Square Riot in New York in 1874 (left) was a typical example of police being used to crack a few skulls to discourage union membership.

They floated stock they knew to be worthless that they sold to unwary investors. They paid rock bottom wages. They bought up competitors and closed them down to create monopolies that raised prices. And, they believed that, in the words of financier Simon Cameron, “An honest politician is one who, when he is bought, will stay bought.”

Of course, none of this cowboy capitalism goes on today. Okay, mortgage-backed securities and collateralized debt obligations might have been a bit dodgy. Right-to-work states might shave a tad off worker incomes and weaken unions a little bit. Oil companies say it’s pure coincidence that gasoline prices all rise at the same moment; there’s no collusion involved. There may be an occasional politician whose vote is determined by the size of a campaign contribution.

Poverty for the masses; opulence for the few

The Public Broadcasting Service (PBS) notes “While the rich wore diamonds, many wore rags. In 1890, 11 million of the nation’s 12 million families earned less than $1,200 per year; of this group, the average annual income was $380, well below the poverty line.”

New immigrants joined rural Americans as they crowded into teeming and filthy tenements where they were harassed by high levels of crime and vermin. They laboured in factories in unsafe conditions and if misfortune befell them in the form of an accident they received no compensation. 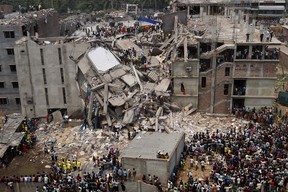 It’s a good thing the income gap has been narrowed so that Tyree Johnson who works at McDonald’s restaurants in Chicago makes $8.25 an hour, while the company CEO, James Skinner, was paid $8.8 million in 2011. To make Skinner’s annual pay Johnson would only have to work 40 hours a week for a bit more than 500 years.

Another good thing is that the dangerous factories have been closed down in America. They are now in places such as Bangladesh where the Rana Plaza building collapsed (above) in April 2013 killing 1,129 garment workers.

Extravagance of the Plutocrats

Conspicuous consumption among the wealthy

Cornelia Bradley-Martin was the daughter of a wealthy Albany merchant who had married into the British aristocracy. She was a hostess who liked to organize elaborate and expensive entertainments for several hundred of her closest friends. 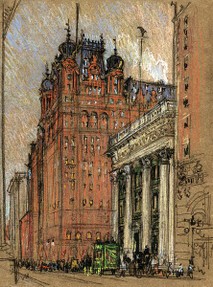 In February 1897, she held a lavish costume ball at New   York’s Waldorf-Astoria hotel. (The original hotel at left was pulled down to make way for the Empire State Building). Among the 700 guests, 50 ladies turned up dressed as Marie Antoinette and one gentleman wore a gold-inlaid suit of armour.

The dinner had 28 courses with such delicacies as plover’s eggs, duck stuffed with truffles, roast suckling pig, and caviar-stuffed oysters. Four thousand bottles of 1884 Moët et Chandon champagne helped wash it all down.

The timing was a bit unfortunate though. The United States was in the midst of a depression that followed the panic of 1893, itself brought on by a banking crisis 20 years earlier.

Of course, people don’t go in for such vulgar displays of wealth today. That’s if you don’t count people like Dennis Kozlowski, at one time the chief honcho at Tyco. He had his company pay for his $30 million New York apartment which came equipped with a $6,000 shower curtain and umbrella stands at $15,000 a pop.

Kozlowski celebrated his wife’s 40th birthday in 2001 with a four-day party on the Italian island of Sardinia. According to USA Today, the $2 million bash “featured performers dressed as Roman servants and a vodka bar featuring an ice sculpture of Michelangelo’s David with vodka flowing out of the sculpture’s male member.”

Donald Trump, an exemplar of good taste, called it “tacky.”

The former tycoon in prison. the segment includes video of the infamous party

Is a Revolution Coming?

A major feature in The Economist (October 2012) says America, as well as “Britain, Canada, China, India, and even egalitarian Sweden,” are in a second gilded age. Wealth has been concentrated through three decades “on a scale that matches, or even exceeds, the first Gilded Age. Including capital gains, the share of national income going to the richest one percent of Americans has doubled since 1980, from 10 percent to 20 percent, roughly where it was a century ago.”

PBS wrote that in the context of the first Gilded Age “An economist in 1879 noted ‘a widespread feeling of unrest and brooding revolution.’ Violent strikes and riots wracked the nation through the turn of the century. The middle class whispered fearfully of ‘carnivals of revenge.’ ” 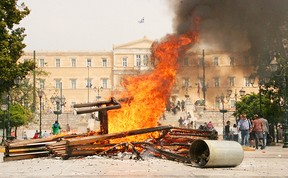 There have already been violent strikes and riots in Greece (right) and many other countries.

Bruce Judson is a lawyer who teaches at the Yale School of Management. In his 2009 book It Could Happen Here: America on the Brink, he warns a revolution is possible in the United States because of income inequality.

He points out that at the start of the Great Depression of the 1930s, a time when the income gap was the same as it is today, “people were seriously concerned about revolution.”

To counter the possibility of turmoil, U.S. President Franklin D. Roosevelt embarked on a program of massive government spending and the break-up of large business empires.

On National Public Radio, Bruce Judson related “It was widely reported that a visitor to President Roosevelt said ‘Mr. President, if your program succeeds you will go down in history as the nation’s greatest president.’ And, Mr. Roosevelt replied, “If not, I will be the last.’ ”

“Mr. Hardhack and the Sensational in Literature and Life.” The American and Continental Monthly, September 1870.

Great analysis! I live in the Hudson Valley where we see plenty of those Gilded Age mansions - of course the owners are no longer the rich. I hope we don't have a revolution, but we do need change. 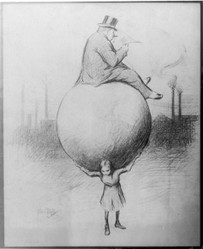