Richard Castle Books - Complete List, Reviews and About the Author

All about these mystery thrillers written by a TV show character

Oh. This is going to get confusing. Because when it comes to Richard Castle and his books, the lines between reality and fiction get extremely convoluted.

Richard Castle is a character on the TV show Castle. He's a world-famous author of action thrillers along the lines of James Bond and looking for a new direction for his work. Enter NYPD detective Kate Beckett, who becomes his inspiration for a new female detective character.

That's part of the fiction.

The reality comes in with the real publication of Castle's books based on Beckett - the Nikki Heat series. These are actual mystery books you can actually buy and read, although the author is listed as the fictional Richard Castle. The books are part of the plots in Castle at times, taking the real books into the fictional world.

No matter what is real and what isn't, the Richard Castle books you can actually buy and read are pretty fun, especially if you're a fan of the show. The humor and interaction of the characters feels much more real when you've been listening to it every Monday night for a while.

(Photo Credits: All images on this page are either book covers or promotional stills and photos from ABC.)

Nikki Heat - hard-boiled NYPD detective on the outside, soft sexy woman on the inside. And the main character in newest series from Richard Castle.

Heat is based on "real" NYPD detective Kate Beckett, whom Castle rides along with to get stories and inspiration. Not because Beckett wanted him there, but Castle is friends with the mayor and pulled a few strings. Castle uses Beckett as his muse, although the stories told in the books are a wee bit spicier than real life has turned out to be.

This series is a direct tie-in with the Castle TV show, right down to the dust jacket picture and bio of Richard Castle from the show. And if you watch the show, you can see the resemblance of each of the book's characters to the show's characters, not to mention Castle's frequent ripping off of the cases they work. In fact, characters:

The book covers crack me up. Very juvenile James Bond movie opening credits style really. Kind of detracts from the Nikki Heat character that deserves to be taken a little more seriously.

To date, there are six Nikki Heat books. 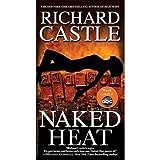 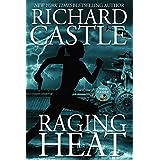 It's a real book, although all the video footage in this is from the first season of Castle. Kind of funny if you've seen the show because the book, totally based on the show characters.

The books that made Castle rich and famous

Castle's writing career started off promising, at least from a literary standpoint. But what moved him into rock-star status (and salary) was Derrick Storm. Storm is a private eye turned CIA agent and was starting to bore Castle, so Castle killed him off in Storm Fall, the final Derrick Storm novel. Or was it?

In my head, I see Storm falling into the same class of books as James Bond or Dirk Pitt. He probably has all of Bond's toys, but more of Pitt's sense of humor and resourcefulness. (Disclaimer: I way prefer Pitt to Bond. At least in book form.)

Since killing off Storm, Castle has focused on the Nikki Heat series, although Storm continues to live on in other forms. Oh, and possibly just living on in general. Kind of like a soap opera, huh?

Castle's Books Are Part of a Marketing Ploy

Do you like book tie-ins for movies and TV shows?

Other Books By Richard Castle

Given he's not a real person, the show's writers have certainly given Castle a stellar background. In addition to the Nikki Heat and Derek Storm series, Castle has quite a list to his name. Looking over the titles, you can see why his publisher (and ex-wife) calls him the Master of the Macabre.

Three of the books are the basis of the murders in the pilot episode and account for why Castle is drawn into Beckett's world in the first place. The complete list comes from the books section of the "author's" website.

Who is Richard Castle?

The question on everyone's mind

According to the dust jacket on the Nikki Heat books:

Richard Castle is the author of numerous bestsellers, including the critically acclaimed Derrick Storm series. His first novel, In a Hail of Bullets, published while he was still in college, received the Nom DePlume Society's prestigious Tom Straw Award for Mystery Literature. Castle currently lives in Manhattan with his daughter and mother, both of whom infuse his life with humor and inspiration.

However, one look at the picture of Nathan Fillion right above that and you realize that isn't exactly correct. After all, Castle is a fictional character portrayed by Fillion, not a real and true person. Which has raised many times the question of just who is actually penning the words on the page?

Several theories have arisen, including that it's one of Castle's poker buddies moonlighting under a pen name. Unlikely in the extreme, although the only solid clue we've been given is that the author has appeared on Castle.

The one theory that has gained steam and seems the most likely is that it's Tom Straw. As in the "prestigious Tom Straw Award for Mystery Literature" mentioned in the bio. Nice way to give the ghostwriter some credit, and Straw is a real person, actual writer and connected as a former TV writer. And Fillion has said Straw has appeared on Castle, although it's not credited in his IMDB listing. (His work with Parker Lewis and Cosby Show is, but nothing about Castle.)

This is one mystery that might not be cleared up until well after the series is over. 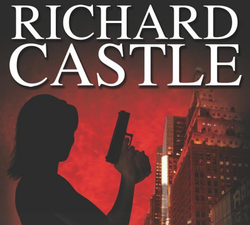