Ruth Purves-Smith crafts deeply emotional, rich songs and shares her passion for making music with anyone who will listen.

Music has been a part of Ruth Purves Smith’s life since she was a small child. Her father enjoyed listening to and playing music and she explains, “He owned an antique woolen mill north of Calgary with my stepmom so we’d commuite from the city where we lived with our mom and went to school and he’d sing rounds in the car with us. That was the beginning of it all. I listened to everything from Tchaikovsky to the Beatles as a kid and Dad had this lovely sunburst twelve string Gibson that he’d play.”

After this experience, she found herself singing on a television show called Number 1 West, Purves Smith describes herself as a “bumpkin” in those early days and says, “I was so terrified, my eyes were the size of dinner plates and I had a thick country drawl when I sang.” At that time, she only sang other people’s songs and didn’t write original material.

After hearing Fred Eaglesmith’s “Ralph’s Last Show” double album given to her by that artist, she realized that it was possible to write good songs about nearly any topic. She says, “I gave myself permission to write and I’ve been writing ever since. I’ve got two albums out and a couple of compilations.”

She adds that one lesson she learned from Eaglesmith was “If you’re going to be somebody other than somebody else you have to write your own stuff.”

Along with the diverse musical influences that she experienced as a child, Purves Smith talks about an inspiration that people wouldn’t suspect given the style of songs that she’s been writing. She explains, “Ultimately my inspiration comes from heavy, hard rock. It’s bizarre because I don’t write hard rock but that’s the stuff that really resets my DNA.”

She's going on tour in May with her younger sister and their goal is to end up in London, ON and play with the band of one of her major musical inspirations - Bill Durst - who fronted “Canada’s heaviest band” Thundermug in the early 1970’s. She says, “The band is going to back me up on some songs that I was inspired to write years ago when I saw him at a festival. It’s going to be like Joan Baez meets ZZ Top or something.”

The process of song writing is a mixture of inspiration and opening herself to the music for Purves Smith. She’ll often sit down with her guitar, find an interesting tuning and let the songs flow. She says, “I find that I’m kind of a conduit and if I sit down in the right place with the right tools occasionally I’ll get a little gold nugget. Songs kind of come through me and I just have a particular channel I can tune into when I’m writing.”

Song ideas can strike at any time for Purves Smith. Often she’ll get an idea when she’s out driving. She explains, “I have to pick up my phone and record them. I have 11 ½  hours of song starts on my cellphone that need attending to right now.”

There are many challenges to being a professional musician but the biggest one that Purves Smith cites is managing all of the roles a musician must play in a career. She says, “The biggest challenge is being able to navigate all of your e-work and technical stuff. You have to get a good producer, get good publicity and you have to get out there and be part of the scene.”

That “scene” in Calgary has been exploding recently and Purves Smith points out, “I don’t believe that in thirty years of looking at the scene in Calgary that I’ve ever seen it so good. It’s gone crazy for independent original music. The talent here is mind boggling. There’s kids who are 14-15 years old who are already legendary with their talent, skills and what they have to say.”

She continues, “There’s so many more singer songwriter venues with the Music Mile and the National Music Centre. We’re seeing the beginnings of a new era for music in Calgary.”

As for her own future, Purves Smith only wants to keep making music. She explains, “I just want to be sustained by the music until I can’t do it any more. There are multiple ways to do that. I just want to perform and I’m not really fussed about where or with whom. I just want to make good music. It might sound a bit small in terms of vision but I can see myself spending the rest of my life right here in Calgary playing with the absolutely stalwart music community here.”

This musician profile is based on an interview conducted with Ruth Purves Smith on March 24, 2016 and recorded on that date.

To learn more about Ruth Purves Smith, visit her website. 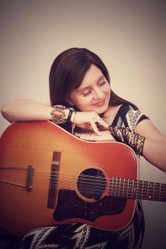