I talk to Jasmin Frederickson and Ari Lantela of Chicken-Like Birds about their unique musical blend, their songwriting process and what inspires them to make music.

Ari Lantela and Jasmin Frederickson are the duo known as the Chicken-Like Birds. Their musical paths first crossed at an open mic at Café Koi in Calgary. Ari explains, “I had just come back from learning to build an acoustic guitar. At that time, I was growing my beard out and Jasmin is a beard fan.”

Jasmin chuckles and adds, “I'd seen him around before and I didn't give him a second thought until I heard that he built things and had a beard. I was sold on him after that.”

Ari says, “I feel that we're theatrical in a lot of ways.There's some songs that are almost acted out. There's a song we do called Faster and Slower that's about the two sides of the coin when you're driving. Sometimes you're a speed demon and other times you're just cruising around. We do the song from both points of view and each of us embodies one of those points of view.”

Their approach to writing songs varies from song to song. Jasmin points out, “Sometimes I'll have a melody and a couple of lines in my head. I'll show them to Ari because he's really good at conceptualizing my ideas. Other times Ari will have something pretty well fleshed out and I'll help him refine it or I'll offer a different  perspective on the song, so we work pretty well together and we always listen to each other and try out what the other person is saying even if we don't like it at first.”

A good example of this collaborative process is outlined by Ari. He says, “There's a new song that we're working on that has a weird story behind it. Jas had written all the lyrics to a raunchier blues song. I was busking in the train stations here in Vancouver and making up this riff. I came home and Jas was like, ‘Hey! I got this song!’ and I was like, ‘Hey! I got this riff!’ and we put them together.”

The last album that the duo recorded is called On The Dusty Trail and revolved around themes of moving and traveling. Jasmine explains, “We really liked the image of pioneers on their chuckwagons and that image is actually on the cover. We had a couple of songs that are pioneer based.”

The full length album took them some time to put out. Jasmin says, “It came together but it was a slower process than some times. I think our new album is going to be much faster. It's all a learning curve and we definitely learned a lot from that last album.”

Ari adds, “Most of that album was live off the floor. There were very minimal overdubs. Jas had only started playing the bass about a month before. We’d wanted to use bass on three of the songs and we ended up using it on all of them.”

The main challenge that the duo faces lately is the lack of venues within Vancouver where they can perform. Jasmin says, “Vancouver is an awesome city to be in but it's becoming challenging because of the venues. Three or four of the venues have just shut down or stopped having music in the last year. Sometimes it's hard to convince people to come out.”

She counters this by saying, “There's a bit of an older crowd there and they're a bit more drawn towards our style of music. We're moving to Salmon Arm in December so hopefully that's going to help.”

Another minor challenge for them is the assumption that they’re a romantic couple as well. Jasmin says, “We sometimes wish there was a magical third person who would stop people from assuming that we're a couple.”

Ari laughs and adds, “The truth is that we were together as a couple for a while. It could have been a bit of a challenge, but it hasn’t been that bad.”

Jasmin concludes, “Sometimes it's a little weird but we've been pretty good with communicating and working towards doing things for the betterment of the music.”

In terms of the broader roots music scene in Canada, Ari is generally positive. He says, “I feel like it's pretty alive and well. I feel like in the small towns that's what they're loving. We played a lot of folk festivals this summer and we played at these music in the parks things all over B.C. I think it's been on the up and up for a while. The scene’s been getting really good in Calgary too.”

Jasmin adds, “I feel that roots music is a little bit more supported in Alberta. You have CKUA which is one of the best radio stations in my opinion. B.C. doesn’t have anything like CKUA. I just went to the new National Music Centre in Calgary too. What a cool place! I feel that in a way Alberta has a better scene for roots music but I think once you get out of  the metropolis of Vancouver it's pretty well supported.”

The band’s future is looking bright according to Jasmin. She says, “When we move to Salmon Arm, we’re hoping to set that up as a base camp. We're planning on getting more involved in the community there and seeing what's happening there because I don't really know. Hopefully we'll play a lot more festivals next year. Our plan for next summer is to go across Canada and hopefully play at as many national parks as we can as it’s the 150th anniversary of the parks this year.”

Both Ari and Jasmin find a great deal of inspiration being musicians. Ari says, “We were in Oliver, B.C. playing this show and I dropped my guitar on stage and cracked the side of it. We were able to finish the set and by the end of that set, the 40 or 50 people in the venue had passed around a cup to help pay for repairing it. It ended up being 200 dollars which was almost exactly the cost of the repairs. Going to small towns and playing music for people is kind of a dream.”

Jasmin says, “I can't believe when I'm on stage and people are paying me to be there. People seem to enjoy it and some people have given us really cool gifts and said that we inspire them to do things. That’s what keeps me going!”

This profile is based on a telephone interview that was conducted and recorded on Sept. 30, 2016. 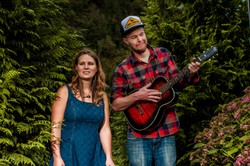