I talk to Gordie MacKeeman about his infectious passion for making music, the band's approach to song writing and arranging and where they find inspiration.

Ever since he was young, Gordie MacKeeman has had a passion for music. It all started when he was a small child. He says, "I started dancing as a young fellow. Someone got me up on the floor dancing and it stuck. I kept on dancing after that and I started fiddling at the age of five as well which is pretty common on the East Coast."

His musical influences and inspirations are many and varied. He explains, "On the fiddle side of things, I was drawn to the Down East style of playing which is slightly different from Celtic playing. I enjoy hearing people like Ned Landry and Al Cherney playing the fiddle. I also like to listen to classic country and rock n' roll, so I draw from a wide range of things."

The other members of The Rhythm Boys also have a broad range of influences and so the music that they select is diverse but Gordie says, "It's often about where our instrumentation leads us to take a song, more than the song’s content itself. For example, we have a Tom Petty cover but we do it in our own folk and bluegrass-influenced style."

One of Gordie's signatures is the way that he dances and moves his legs while he plays the fiddle. He points out, "As I said, I started off dancing so it was just something that I always did. I don't think I could play if I had to sit still. Sometimes I have trouble recording in the studio because I'm always moving around."

The Rhythm Boys bring a deep well of musical talent to bear in backing Gordie up. He says, "Tom Webb, Jason Burbine and Peter Cann are all really talented musicians. All of them can play numerous instruments and they can turn their hand to just about any kind of music. Any one of them could play a show all on their own. It's great to work with them and we're all great friends too. I think when people come to our shows they can feel it. We get the comment a lot that the audience can tell that we enjoy making music together."

When it comes to song writing, each of the band members often writes separately before they bring the pieces to the whole group. Gordie says, "We get together to arrange the songs which is often just as important as the song writing process itself. The song can take a totally different turn than you'd planned in your head."

The band's newest album is entitled Laugh, Dance & Sing and was recorded by Dale Murray. Gordie points out, "Dale's a really talented musician himself. We really thought about trying to make the album as much like our live show as possible which can be a hard thing to do. We tried to record a lot of it live off the floor because we wanted it to be a souvenir of the show. We still sell a lot of albums at shows!"

In the future, Gordie explains that as long as the band can keep playing, they'll be happy. He adds, "Right now, we do a lot of our work over the the U.K. so we're hoping to break out a little more into Europe and also stateside. We'd like to break into things stateside a little more. I guess you could say that we're always trying to expand our market."

The band finds inspiration from simply playing together and enjoying the performing experience. Gordie explains, "I think all of us, as a band, are very comfortable on stage. We love to play and it's one of those things as a musician that if we weren't out playing, we'd be playing at home so it's better to go out and play. You can make your living at it."

For more information on Gordie MacKeeman and His Rhythm Boys, please visit them here.

This profile is based on an interview with Gordie MacKeeman conducted and recorded on Dec. 12, 2016. 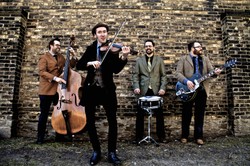