I talk to singer-songwriter Ian Foster about the intertwining of music and words, the magic of recording in different spaces and how he stays passionate about making music.

Ian Foster has always loved making music. He started out playing all of the keyboards at the Radio Shack in his local mall until they told him to stop. He says, “My parents took that as a sign so they got me a keyboard for Christmas. I figured out how to play a couple of songs on my own and they took that as a further sign, so they put me in piano lessons when I was ten years old. I took piano lessons for the next ten years. Somewhere along the way I also picked up guitar and voice.”

Every record that Ian releases has an overarching concept behind it. He explains, “After touring and living for a couple of years, I look at the songs and the stories that have come together in that time. There’s usually some sort of common thread that seems to be weaving through them, so I choose the songs that best represent that common thread and put them on the record. The theme of the record is developed at that point.”

Ian’s song writing process varies from song to song. He points out, “There are songs that are lyrics first and there are songs that are music first. Some of my favourites are songs where those things both happen at the same time, but the goal is to create an amalgam between the two. The music needs to set the right mood for the lyric and the lyric needs to reflect the right mood for the music, so they’re inextricably linked.”

When it comes to recording, Ian has become interested in making records outside of the usual studio space. He says, “On the last full length record that I made for myself we went into an alternative space. We used an open concept house and art gallery in a place called Pouch Cove which is about 20-30 minutes outside of St. John’s. It led to a really cohesive experience, so the space is a part of that record rather than what was recorded in a studio space. I found that to be a very inspiring thing. I think there’s an ‘X’ factor that ends up getting into a record when it’s made that way.”

Having a consistent lineup of musicians with whom he can work is important to Ian. He says, “I’ve had many different people in the band over the years, but many of them have stayed for long periods of time. Nick Coultas-Clarke is a wonderful drummer and was the drummer on my last two records,  He moved to Toronto so I’ve been playing with a guy called Andrew McCarthy who is also a great drummer. It’s the same with bass players. Josh Bamfield played a whack of shows for me and he played on my last record. I’ve had a regular violin player named Janis Campbell who has also played on my last two records.”

He adds, “My life partner, Nancy Hynes, is also my singing partner and she sings harmony on my records as well. I have a core group of musicians that play with me and I don’t change that up unless circumstances require it.”

The essence of musical creativity, for Ian, comes from the ways in which one’s musical vocabulary grows and expands. He explains, “As you learn more music and hear more things, your vocabulary grows and the way that the stew is made gets more complex until you have your own sound. It’s not distinguishable who influenced which part of it.”

He cites some musical influences that he’s found particularly important and says, “I’m a big Joe Henry fan, he’s a phenomenal producer, so he’s a double idol of mine because I love what he does as a producer and a musician. Obviously I’m inspired by the icons like Cohen, Springsteen and Dylan who blazed a trail for deeper songwriting. I enjoy Ron Sexsmith and Glenn Hansard as singer songwriters, but I also love Sigur Rós and Daniel Lanois who do more atmospheric music.”

As for his future plans, Ian wants to expand on what he’s been doing recently. He says, “I’ve been producing more albums for other people lately and it’s really enjoyable. I’ve composed music for two films in the last couple of years, so I certainly don’t get a single T4 slip from the same place every year.  I’ve worked on a lot of different projects, so I’ve really enjoyed the last few years.  I hope to do a little bit more of all of those things in the future.”

Ian has mixed opinions on the state of music in Canada. He says, “It’s getting harder to speak about how capital ‘M’ music is doing in a direct way. It’s a complicated world full of streaming media and a lot of fragmentation. Fragmentation might be seen in a negative way, but I think the fragmentation of genres is exciting.”

He continues, “It has become harder to quantify what success might be. It’s laid at the feet of the individual artist to find a place where they’re comfortable and they feel like they’re connecting. There’s certainly a lot of emphasis placed on the digital realm but the things that make me feel like I’m doing what I ought to be doing have nothing to do with the number of Facebook likes that I get.”

The folk/roots scene in Canada comes in for praise from Ian. He points out, “It’s a scene with an overall sense of cohesion and a spiderweb of connections between artists. It’s a small scene and a lot of the artists know each other or know of each other.”

Inspiration comes from the connections that he makes with people for Ian. He says, “It’s about having a real conversation with someone after playing a show or receiving the occasional email from someone telling you about how your music moved them. It comes from those direct connections to someone else through my music.”

This profile of Ian Foster is based on a telephone interview conducted and recorded on Sept. 6, 2016.

Ian Foster is one of the BEST! Absolutely love him and try to get to every concert within 1 to 1 1/2 hrs. driving distance! 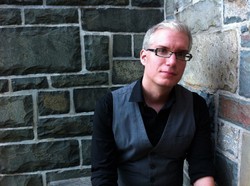