I talk to Jason Burnstick about his musical passion, motivation and desire to see music transcend divisions.

Jason Burnstick was first inspired to make musc by his older brothers.As soon as he started playing, Jason was drawn into the music. He committed to the idea of being a musician when he was about 14 years old. When he was 16, his stepfather made a prediction that he'd become successful as a musician and that he should make music because he loved it. He says, "I didn't take it too seriously at first and it didn't hit me until I was playing in Australia for the second time. I realized that everything he'd said had come true."

He adds, "My stepfather had given me this lap slide bar from the 1920's or 1930's. I knew it was from a slide but I didn't understand how to use it or anything like that. I kept it and I still have it. I keep it in my guitar case for all of my shows. It's a reminder of those times.

There have been a number of diverse influences on Jason's music. The first one was hearing movie soundtracks as a child. He explains, "I loved the music that was supporting the emotional content of a scene, so that was my first realization of what music could do and it was one of my major influences."

The second major influence for him was playing with an Andean group from Ecuador called Kanatan Aski. Jason explains, "I played with them for a number of years and they became a huge inspiration for me in terms of the rhythms they played, their style of playing and the different tempos and harmonies that they had. I was invited to play with them and it became a piece of my physical fibre, my upbringing and so it became a part of my life. It was a really unique experience."

The third major influence that Jason mentions was seeing Ben Harper playing. At that point, he knew that he would keep playing lap slide guitar into the future.

One issue that he wants to highlight is the sheer talent of First Nations musicians. Jason says, "Some of the most amazing musicians I've ever seen are First Nations people. Look at people like Tanya Tagaq, Northern Cree and A Tribe Called Red!. They're world renowned!  I feel like people are finally getting it. It's just nice that people are finally digging into it and seeing that there's some really great talent out there."

He adds, "It'd be nice to see Canadians understand more because it would make Canada a better place too. It's not happening fast enough but at least it's happening."

In Jason's view, music is too full of labels. He points out, "We're all just musicians at the end of the day. We're all just people doing what we love doing and it'd be nice just to look at that. For me, growing up with my buddies in the Prairies, they were all white guys and it didn't matter. We'd all jam out around the fire and play songs all night. Colour didn't have any place there, it was just good music."

Jason's songs are inspired by many different things. He says, "Sometimes they're inspired by my frustration with the world. I want to talk about racism and discrimination. As frustrating as those things are, they are inspirations for my music. I'm tired of seeing it and I wish it didn't exist but it does. I want to make a change and maybe that's why I talk about it in the music that I write."

For him, music isn't just a hobby or even a career, but instead it's a way of life. Jason says, "I'll play music until the day that I die. As long as I get to play music, I just love it. I play music every single day. I go to bed playing my lap slides every single night. It's just a part of life for me. It's not a career choice, it's just the way it is."

For more information on Jason and his music, please visit him online here.

This profile of Jason Burnstick is based on a telephone interview conducted and recorded on May 10, 2017. 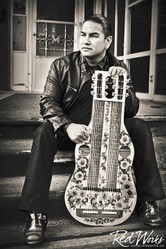