I talk to Red Haven's Jen Charters about the roots of the band's music, their process of creative collaboration and being part of a close-knit folk music community.

Before Red Haven became a band, Jen Charters (sax and vocals) and Brendan Steele (guitar) started a relationship. Jen says, "We found we had a lot of musical charisma together. We jammed a lot but it was never really a band per se. Our friend Theresa was having an album release party and she suggested that we make a band together to play at that party. We basically got a bunch of our friends together and took the name Red Haven from a sign that we saw." Red Haven also includes Nathan Turner who plays bass, writes songs for the band and sings as well as Jesse Thom on drums.

Swing is one of the elements that underpins Red Haven's musical style. Jen points out, "Most of our music is swung, we don't have many songs in straight time, so that's definitely been an influence. We've been listening to people like Louis Armstrong, The Devil Makes Three and Pokey LaFarge. We're also influenced by the energy and fun minor key horn lines of bands like Gogol Bordello.”

Jen adds that another strong source of inspiration is hip hop.. She says, "Our collaboration with the band Dirty Grace has brought it into our lives. It was just so prevalent in the '90's that it's an unavoidable reference in our writing."

Jen, Brendan and Nathan all share song wriitng duties so there's a lot of scope for collaboration. Jen goes on to say, "We each bring in songs with lyrics and a chord structure. The band gets together and we workshop the song until we're all happy with it. There's a huge arrangement and writing process that happens after the actual lyrics and chords are written. Although the song might have one author, we tend to say that Red Haven collaborated on each song because there is so much influence from me, Brendan and Nathan that goes into each song.."

The band's previous album was recorded in a church in the town of Wells B.C. while they were doing an artist residency program in the town. Jen says, "We locked ourselves in the church space we’d rented with a bunch of rented audio equipment and made this album. It was really fun and we got to play shows for people there which helped pay for some of the costs."

Making the album wasn't without its challenges as Jen explains. She says, "We recorded the album in March and there was a big snowstorm and the power went out for three days. We had all of our stuff recorded but we were trying to edit, so that we could be ready for back up vocals and lead vocals to be put on. We brought our computers with us and we were trying to do the editing with headphones on them, so that was really interesting!"

On their next album, Red Haven's going to take a different direction. Jen explains, "We are really stoked about bringing other people into the fold and working with Shawn Cole as a producer. He produced our latest single Big Machine. We're also going to be working in a professional studio, so we have some security and more time to spend writing, composing and arranging as opposed to us doing all of our own recording."

Being a consensus-based band is both challenging and rewarding in Jen's opinion. She says, "I love it but you have to check in and make sure everyone's doing the same amount of work and that no one's taking on too much. We work really well together so that's a strong point for us but it also challenges us to be patient. If one person feels really strongly one way and the rest of the group feels strongly the other way, we try to make concessions and compromises to  accommodate everyone."

The folk music community in B.C. and Alberta is something that she praises. Jen says, "There’s a network of festivals in the region and all of the organizers talk to each other. They happen on the weekends so it's almost a big convoy from one festival to the next. It's so funny because people live on the other side of the country, but they all come together for these festivals. I'll see someone from the Yukon every weekend whereas I won't see my next door neighbours much at all."

She adds, "There's a lot of guesting between bands on other people's performances and you pick up a lot jamming together until 4 a.m.  It has helped to create this B.C. / Alberta sound that's quite unique!"

In the future, Jen says the band is excited to continue exploring the songwriting process. She continues, "We want to really focus on the music and the songwriting to even more of a degree than we have in the past. We also want to get out and just experience other parts of the world. We've been to Colorado and England which were incredible experiences, but getting to non-English speaking places would be really great too. We want the wealth of influences that come from experiencing other cultures and other types of music."

One of the strongest sources for inspiration in Red Haven comes from the cooperation between the band members. Jen says, "We have this strong network of support, so that when one person's feeling down, the other people are there to help perk them up and pick up the slack if they’re not really feeling energetic during a show. We really inspire each other with the songs that we write. People come in with things that you never would have expected and it's just great to get that fresh outlook in the music."

This profile is based on an interview with Jennifer Charters, conducted and recorded on Nov. 29, 2016. 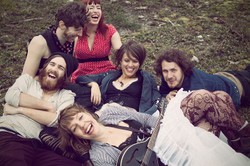