I talk to Lindsey Walker about using music to express difficult emotions, the creative process and the welcoming nature of the Alberta music scene.

Combining her love of writing with a love of singing has allowed Lindsey Walker to fully express her emotions. As a teenager, she wrote poetry and she explains, "I played piano and guitar growing up, but I never put the two things together until I was in university. I was doing a theatre degree at the University of Winnipeg and it kind of expanded and evolved from there. I never really thought of myself as a songwriter but I feel as I get older, it's becoming more apparent that it's what I am."

One of the reasons Lindsey likes to write songs is that it allows her to express emotions that she has difficulty airing. She says, "I try to create music that talks about all of the things that I'm too afraid to talk about as a human being. I'm a pretty happy, positive person, but my music is quite the opposite of that. It's more touching and sometimes it delves into darker themes and ideas. It's the stuff that affects me in a way that I can't fully understand unless I write about it."

Writing by itself doesn't represent the same kind of emotional outlet for her as singing does. She points out, "I tend to put a lot of emotion into how I perform my songs vocally. I find that melding singing and lyrics together is the perfect way to express myself. I still write a lot of poetry but I don't publish it. I find that what I write in my songs is a lot more personal."

The process of songwriting is a matter of combining the appropriate music with the right lyrics for Lindsey. She says, "I can usually hear how the drums or the bass would fit into a song. I have some kind of idea that isn't just the words or just the music, it's more of an orchestrated piece and I build it from there. Sometimes I'm scrambling through my book of song lyrics to find something that fits or connects with the music or vice versa."

Finding balance in her life is one challenge that she cites. Lindsey elaborates, "When you're an independent artist, you have to find a balance between when you work on the business related aspects of the job and when you work on the artistic aspects. It's a matter of finding the time to write, create and play even though there are deadlines looming."

Playing house concerts is something that Lindsey has done more of lately. She says, "I adore them and I think they are the wave of the future. There are so many venues that have closed down or shifted away from having live music. As a touring musician, it's getting tougher to have stable tours, so I think house concerts are a great way to connect with an audience in a really intimate way. It's not about me being up on a pedestal but more about creating a beautiful community around sharing music."

The music scene in Alberta is something about which she feels extremely positive. She says, "Edmonton and Calgary have such a huge sense of family and community. It doesn't matter what genre of music you play or the level at which you approach music, everyone is welcomed, everyone is supported and everyone is lifted up. I have been to the large cities and you see the sense of community in pockets, but a lot of times there's a sense of competition. I find that in Alberta that's not the case at all."

In the future, Lindsey has a variety of projects and plans in the works. She explains, "I'm going to be releasing an album next year. It's still based in a roots kind of sound but it's amalgamating a lot of different genres. I've been characterizing it as cinematic, gloomy roots rock.

She continues, “I'm looking at getting into some publishing deals and licensing deals. I'm going to be working with publicists and possibly looking to link up with a label of some sort. I want to maybe do a retreat where I lock myself away with all of my instruments and have a computer with a recording device on it and seeing what comes of that. I've been really busy this year which is a blessing but it hasn't allowed me much time to do any writing."

There are many sources of inspiration for her to make music. Lindsey points out, "I grew up listening to classic rock and I went to jazz school and I did a lot of musicals in theatre school, so I have all of these weird sections of music that I love. When I'm on tour, I listen to audiobooks, so I find that a lot of my inspiration for songs recently hasn't come from a personal standpoint. It's more about drawing from characters or observations from the audiobooks."'

She adds, "I don't often talk about current events in my music but I'll talk about something that happened twenty or thirty years ago. It might not have been a big event, it might be something small that happened in the world that I feel connected to."

For more information on Lindsey Walker, please visit her website.

This profile is based on an interview conducted and recorded on Oct. 25, 2016 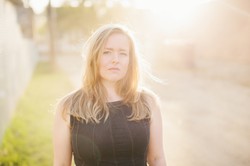