I speak to OQO's accordionist Ian Griffiths about the creative process, his views on the Canadian folk/roots scene and the joys of being nomadic.

OQO creates music with influences from around the world that reflects the well-traveled musicians who make up the band. Ian Griffiths plays accordion in the band and he explains how they got their start. He says, "I met Jacques Mindreau, our fiddle player, when he was out west. We were in a project called Beautiful Wild Animals for a number of years and then Keith Rodger, our bass player, joined us and we changed the name to OQO. That was three years ago, so we've been touring the east and west coasts of Canada ever since."

Each member of OQO brings a different musical background to the band. Ian explains, "Jacques studied the Suzuki method of violin. He was born in Peru and he speaks German and Spanish. Those languages mix together in his head to create an artificial language similar to what Sigur Rós has done. He puts together made up syllables and I think that his multilingual background really influences the sound of the words that come out."

He continues, "Keith Rodger went to jazz school in Calgary and he brings a lot of technical prowess to the band. He's able to instantly know the chords to whatever melodies that me and Jacques make up.”

Ian has taught himself accordion over a ten year period. He goes on to say, “I did a lot of traveling with the instrument and picked up different styles. I was fortunate enough to spend time with the Roma in Romania and learn from them. In 2014, I went to India and studied Indian classical music for a month. I lived in Spain for two years studying flamenco guitar and that's where I bought my first accordion."

Each piece that the band creates differs but they all start when someone brings the seed of a song to the table. From there, Ian says, "If I bring the melody and a chord structure, Keith will work on the bass part and Jacques will create his part on the fiddle and work on the vocal part. A lot of our pieces have structure but we also do a lot of improvisation."

He adds, "There are set pieces that are interchangeable and there are little calls that let people know there's another section coming. A lot of the music gets created on the fly."

OQO has made two albums that vary in the way they were recorded. Ian explains, "We've made two records so far and each of the records had a different philosophy behind them. OQO Part I was recorded live off the floor into a Zoom recorder in an old ammunition bunker at a place called York Redoubt in Halifax. We snuck in there in the middle of the night, set the recorder going and improvised a lot of that recording. The second half of that first recording, we recorded in a house in Halifax in a similar fashion."

Their second album was recorded in a studio in Ymir, B.C. over five 10 hour days. Ian says, "Some of the tunes on OQO Part II were live off the floor, some of them we did live bed tracks and overdubbed all of the other parts and then one piece on that was entirely overdubs."

One of the major challenges for the band is the nature of their music and how it affects their choice of venues. Ian says, "This band is cinematic, ambient and lyrical  it doesn't translate well to a pub scenario. People make money in the industry off of alcohol and not music which is fine. It's a challenge to find a venue where we can present the music in a way that's satisfactory to us and our audience."

He adds, "We need a quiet house show environment, a theatre environment or a folk festival where people can really hear the music. If they do, they seem to be really affected by OQO."

Although the Canadian roots music scene is small, Ian says that it has it's own sort of vibrancy. He says, "There's not the volume that there is in the United States, but everybody knows each other and it's a really close-knit scene."

He puts a caveat on this statement as he points out, "Unfortunately I've found in roots music that the only high paying gigs are with an older audience and low paying gigs are with young people. There's not much integration between the generations that enjoy folk music in Canada. We can get folk club gigs that are mostly senior citizens which isn't bad but when it's a mixed crowd and a different demographic, it's always more fun."

He continues, "One thing that OQO is doing is crossing over a bit into a strange niche in some ways. We played Shambhala (an electronic music festival) and the year prior we played another electronic music festival called Kamp. Even though what we do is folk music, it translates to that party environment well because it's psychedelic. There's lots of changes, it's weird and Jacques is singing in a strange language."

In the future, OQO wants to transition to doing more hall and theatre shows. Ian says, "I'd love to be able to book theatres and be able to make that work. I'd like to take our music to an audience where it would really fly."

The motivations are two-fold for Ian when it comes to making music and living the life of a musician. He says, "There's a certain amount of fulfillment that comes from playing music every day especially with OQO because it's a real interactive show. There's a lot of improvisation so every show is different and the feeling you get from each crowd is different. The lifestyle is amazing. It allows me to be on the road, meet people I love and not have a fixed address. It facilitates a nomadic life and I've really come to terms with the fact that I'm nomadic."

For more information on OQO, please visit them here.

This profile of Ian Griffiths is based on a telephone interview conducted and recorded on Oct. 26, 2016. 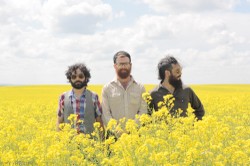