I talk to singer, songwriter and multi-instrumental wizard Ryland Moranz about writing songs, the joys of playing many instruments and how he stays inspired.

It would have been hard for Ryland Moranz to avoid becoming a musician as he grew up. He explains, "My parents helped found the South Country Fair and both of them played music. It was a musically eclectic household. I was raised in an environment where our lives built up to a musical event in the summer that refreshed every year, so I guess I didn't really have much of a chance to become an accountant! Both my sister and I are song writers and it was just so neat to grow up with a lifestyle that we both took to really well."

However, he didn't immediately jump into a musical career. Ryland took a few detours along the way. He says, "I studied aviation and got my private pilot's license. I was a theatre tech for a while too but there was something about writing music, playing music live and recording it that I couldn't deny. it made me feel good and natural as far as being my own human goes."

He finds inspiration in song writers who are also story tellers. Ryland cites people like Guy Clark, Blaze Foley, John Prine and Sam Baker as exemplars of this idea and says, "They can take an everyday story and find something in it that makes it personal and believable. Finding out what it is that makes a story its most human really spoke to me when I started writing songs. I also ended up turning into quite a history nerd in my personal life. I read a lot of non-fiction history as well as historical fiction. I read people like Hemingway and Eric Maria Remarque who wrote All Quiet on the Western Front, so my song writing has become historically accurate."

Writing a song isn't something that Ryland can force on himself. He points out, "If I sit down and think about writing a song that day,  I'll get distracted and think about how I should clean the kitchen or something. There are moments when you're struck by something and you have to write it down. I usually write the words first and put it to a melody. I keep both parts sectioned off until it's time to put them together. I have a book of lyrics and a binder full of chord progressions and little riffs that I'm working on and eventually I put a song together."

He continues, "I'm a multi-instrumentalist. It's great to play a show and change instruments every couple of songs to keep the show fresh. It's amazing how much you have to carry with four instruments though! I actually really enjoy the multifaceted musical experience. If you write a song in G and you know the basics of other instruments, you can express that same song in a different way."

Another positive aspect of playing many instruments is the interaction it creates with other people in Ryland's view. He says, "People will come up and say, 'Wow you played the whatchamacallit! I'm learning that!' or 'Have you tried playing this?' My favourite thing is finding people who are fantastic musicians who can totally tell that I'm faking my way through it because I get to learn a lot from them."

One challenge that Ryland faces as a professional musician is his nature as a homebody. He elaborates, "My wife is a school teacher, so when I'm home we're in bed by 8:30 p.m. and we're reading or watching something on Netflix and then it's bed time. I try to wake up pretty early so getting up and playing gigs means that you're staying up later and your schedule is kind of thrown off. The hardest part for me is actually staying awake until the show. I don't think that's a typical thing for musicians."

Sometimes maintaining a healthy lifestyle is difficult as a touring musician. Ryland says, "You walk into a venue and someone offers you a beer and you say yes and then you have four in a day and dinner before and a snack after. It's hard to find a balance.”

Ryland has strong praise for the folk and roots music scene in Alberta. He says, "Alberta has some of the coolest folk and roots stuff in Canada. It's a really cool time to be a folk musician in Alberta. Leeroy Stagger, John Wort Hannam, Dave McCann and Corb Lund all live on the same street I do in Lethbridge. We also have CKUA's Alison Brock living on the same street too. It's a cool scene. Calgary's got great artists, Edmonton too. You can trip over great people everywhere you turn."

Currently Ryland is working on a new album about which he says, "It's a bit of a departure from my last album. It's still folky but i'm trying to spread my arms to encompass more styles in an album. It's inspired by some of my favourite records like Steve Earle's stuff where every song sounds a bit different. Leeroy Stagger's producing the album and I'm really excited about it!"

In the future, he wants to grow as a musician. Ryland explains, "I just want to keep growing as a songwriter and a player. There's something about being able to write lyrics that touch people but if you can hit their emotions without opening your mouth, I think that's a really special thing. In my opinion, you never 'get there' as a musician. If you think you've got there, you're kind of done playing. I'm just dedicated to making that journey as long as possible."

Inspiration comes from many sources for Ryland. He says, "I'm constantly inspired by cool musicians who are playing and coming through. I'm inspired by the community that we have here in Alberta. I'm happy to be part of something vibrant and neat. It's a good place to be."

For more information on Ryland, please visit his website here.

This profile of Ryland Moranz is based on a telephone interview conducted and recorded on Jan. 18, 2017. 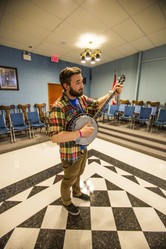