I talk to Shawna Caspi about her desire to tell hidden stories, her love for language and where she finds inspiration as a songwriter.

Ever since she was a child, Shawna Caspi has been making music. She started out singing in children's choirs before going to an arts high school in Ottawa where she studied vocal music. She moved on to study music at York University before starting her career as a touring singer/songwriter.

Telling the truth is important for Shawna as a songwriter. She says, "I try not to be afraid of anything in the songs that I write. I've learned not to fear making people uncomfortable if I feel something needs to be said. I've been trying to bring to light things that have been hidden for a long time whether those are social justice issues or political issues."

However she isn't solely focused on issue-based songs. She points out, "I also write love songs. I'm trying to bring to light small moments that might seem insignificant. I want to highlight them and make them vibrant and beautiful."

Lately Shawna's approach to writing songs has become quite disciplined. She explains, "The discipline came after I got some songwriting grants because once you have the grants then you have pressure to fulfill them within a certain time period, so I started doing a lot of daily writing practice."

She continues, "It's often the words that come to me first when I'm working on a song and they're what I give the most weight to. I love poetry so I like playing with words and crafting the text of a song."

There's a stereotype about folk music being "three chords and the truth" but Shawna brings more instrumental skill to bear in her songs. She says, "I studied classical guitar when I was in high school. When I went to York University, one of the classes I took was a folk guitar class and my teacher was a flamenco guitar player, so I have all of these different guitar influences. I love it because I play solo when I play live, but as a fingerstyle guitarist, I can bring an entire band with me in my fingertips."

That being said, on her upcoming album, she's focusing more on the lyrical content of her songs. Shawna says, "On my past three records, I really pushed the complexity and the intricacy of my guitar playing as a really big part of the recording. I'm putting more emphasis on the vocals for this record I'm working on now. I'm letting the lyrics come to the forefront of the song."

Another aspect of Shawna's creative life is her landscape painting. As part of her degree at York University, she had to take a fine arts course outside of her music major. She ended up taking a painting course and says, "I was really bad at it and I was afraid that I wasn't going to graduate because of it but I worked really hard and learned how to paint. After university, I put my paints away and didn't really think about it until a few years ago when I started touring as a musician."

She continues, "I found myself going to all of these beautiful places that I'd never been to before. When I got home, I had all these photos I'd taken of them and I wondered if I could still paint so I started painting landscapes from the photos. I made the paintings available at my shows as part of my merchandise and they were surprisingly popular!"

As an independent musician, Shawna points out the biggest challenge is having to do everything on her own. She says, "It's exhausting and overwhelming. I wish that I could delegate some of it because I know I'm missing opportunities. I just physically can't get to everything. The Catch 22 is that you can't get representation until you're at the point when you practically don't need it but you just can't do all of the work on your own."

Her views of the Canadian roots music scene are generally positive. Shawna says, "I really love it and I think it's really supportive and in general the people who are involved are just exceptional human beings. We're really lucky that way in Canada. We're such a huge country but it's a small community of musicians, so everybody knows each other and everybody helps each other out."

She does, however, sound a note of caution. She says, "The folk music scene and the music scene in general is in a weird place right now especially when it comes to recording. We're in a place where we're expected to make and print actual CDs yet people aren't buying CDs in the same number any more. Eventually there will be another format, but we're kind of in the middle now so that's really difficult to navigate."

Her approach varies when it comes to the sound she's aiming for on her recordings. Shawna says, "The last album I put out was a guitar/voice record. It was recorded live off the floor because I was very interested in having that raw, real sound that sounded like my live show. In regards to my most recent album, I'm going back to multi-tracking and getting other artists to come in and make the sound fuller and more colourful."

This profile of Shawna Caspi is based on a telephone interview conducted and recorded on Jan 4, 2017. 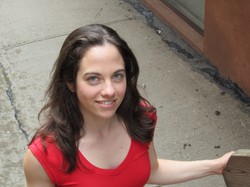