I talk to Sophie Lavoie about combining two musical cultures, the importance of keeping traditions alive and her sources of musical inspiration.

While she was playing with her first band called L’Attisée, Sophie Lavoie met Fiachra O'Regan at a music festival in Ireland. They discovered that they shared a musical vision and started to work together. Sophie explains, "We decided to mix the Irish and the Québecois musical traditions together. At the beginning, we were just experimenting with the similarities and the differences. We had a lot of fun with that! We discovered so many tunes that were similar, tunes that came over to Québec from Ireland.”

Her choice of tunes is driven by a desire to keep old music alive and collect songs before they disappear. Sophie elaborates, "I'm going for older tunes that aren't played much any more. I'm going to meet older musicians from my home region of Lac Saint Jean so I can find traditional tunes that I like. Sometimes I'll go to see someone who is 85 years old and they're playing a tune I haven't heard before. I want to give those tunes back to people because if you don't play them, they might just disappear."

Arranging tunes is something that Sophie enjoys but she takes a certain approach to the way in which she arranges music. She says, "I don't like to do obvious arrangements. I like the arrangement to be subtle so that people don't notice that the music is even arranged. "

She contrasts this with Fiachra's more improvisational approach and points out, "Things are more improvised in Ireland. Québecois musicians like to do more arrangement. In Ireland, CD’s are often recorded with people playing the tunes live and improvising. It can be still so beautiful and so alive at the same time."

Sophie concludes, "Fiachra prefers playing on the spot and I really like arranging, so it's a contradiction that we just have to live with. Sometimes we have a bit of improvisation in recording and a bit of arrangement but we always want to let the music live."

A desire to capture as much life and energy in the music has extended to their recordings in Sophie's view. She says, "On the last album, we did it like it was live and we only got one shot at it. We didn't talk about anything, we just played the music and let things happen and then we picked the better tracks. It made the music come alive!"

The challenge for Sophie and Fiachra is to find a balance between music that attracts audiences and music that they enjoy playing for themselves. Sophie says, "When you do gigs, you have to entertain the audience first. There are things I'd like to play but I know they won't work in a gig. They can go on an album instead. Sometimes you also have to change your music from set to set to match your audience. An audience in a pub is a different audience from one at a festival."

However, she adds, "The mode of transmitting traditional music has changed over the last few generations. I'm a little worried about the loss of the traditional way of learning. People don't play with the older generations of musicians now. They're all learning by themselves. They go to sessions, hear tunes and learn them that way, but they haven't played with older musicians in order to learn the old style. You're not going to get that from sessions."

Aiding the transmission of musical knowledge is something about which Sophie is passionate. She says,"I met with a lot of older fiddlers from my region. They were between 70 and 90 years old. I played with them, I recorded them and I filmed them. I analyzed their playing because I wanted to learn the old ways of playing. People played differently in the past and there are things that will get lost if you don't take care of them. A lot of those fiddlers tell me that they have nobody in their family who wants to learn under them. There's a break of generations. If the younger musicians don't go back to those older people right now, they will lose the traditions."

Recording another album is on the cards in the near future. Sophie says, "I went to collect lots of tunes. Now I have so many good tunes in my head that I want to record them!  Fiachra and I are doing loads of different projects. The music we play is not the most commercial so we don’t do very big tours, we do two or three tours per year as Sophie & Fiachra as well as a lot of local and residency gigs.  We play as a duo, and as a trio with the guitarist André Marchand, and now we're playing with the Breton flute player Malo Carvou in a group called Trois pays. Also, I started to play with another band from Québec called Tu m’en diras tant, and Fiachra is involved in other bands, so we have lots of projects going on!"

Sophie finds motivation in exploring old tunes in new ways. She says, "I'm having fun varying my music. Traditional music isn't written down for a reason and that reason is that you can actually change passages in it, vary the notes, vary the ornamentation and the rhythm! Right now, I love to take a simple tune and find as many different ways to play it as I can."

This profile of Sophie Lavoie is based on a telephone interview that was conducted and recorded on Jan. 10, 2017 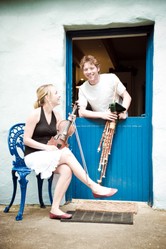