I talk to Mandy Canning and Annie Savage about the origins of Sweet Saturday, how they create new songs and what fires their passion to make music.

Sweet Saturday is Annie Savage, Mandy Canning and Jaimie Atkins. They sing original songs in three-part harmony. I talk to Mandy and Annie about their experiences and their approach to making music.

Sweet Saturday got its start after Mandy, Jaimie and their friend Karen decided to do some singing in church. They came to enjoy it so much that they began to pursue it more seriously. The name of the band is related to their Saturday rehearsals and how much they looked forward to them.

Mandy says that the band members realized that they needed to add instruments to their singing, but they only played piano. She explains, “We realized that we could learn as we went along, so Jaimie started playing guitar, I took up the mandolin again and also grabbed the bass guitar. Karen grabbed the ukelele. At first every performance was like spinning delicate china, but we’re at the point where we can hold our own now.”

Eventually Karen left the group to spend more time with her family. Annie joined at that point and Mandy says, “It's been going amazingly well. Annie is so fantastic. She's a great song writer, a fantastic vocalist and she has fresh new ideas.”

Mandy is strongly influenced by bluegrass, Southern gospel and traditional country music. She says, “I was in a family band from a very early age. I was singing before I could talk. my dad was in a number of bands and he'd take me along with him. I was a cute little girl in my dress and pigtails. I’d grab the mic that was nearly as big as my head and sing with him.”

As she got older, her musical influences broadened. Mandy explains, “I've really come to adore the classics like the Eagles and the Beatles. Another big inspiration for me is Alison Krauss.  I wish I could sing like her and I wish I could write like her. Her songs are so haunting.”

Annie has always loved music and she’s been influenced by many different genres. She says, “Music was my whole world when I was growing up. I listened to a lot of Ella Fitzgerald. I also listened to a lot of punk rock and later on it was Nirvana, Pearl Jam and Soundgarden. When I got a little older, I went back to jazz.”

Her career as a songwriter really took off once she started singing with Sweet Saturday. Annie explains, “I’ll just be at home and a song will come over me. I’ll pretty much write the song at that point. The other girls and I will get together and change it from an Annie song into a Sweet Saturday song. They add their beautiful harmonies and embellish it. It blossoms into something bigger than I would have been able to come up with on my own.”

One of the most painstaking parts of writing for the group is working out their three part harmonies. Annie says, “We want to find the harmonies that work the best for the three of us. We want to create something that’s really going to stop people in their tracks.”

Mandy adds, “We start working out harmonies and a chorus first. If the song isn't complete, we brainstorm and try different rhythms and different vocal lines or different melodies. We re-write lyrics if we have to.”

Once they have a finished song, they look for a vocal hook. Mandy points out, “You want something that's really catchy and something that isn't too complicated. It still has to be complicated enough to be interesting though. The gauge I go by personally is whether it gives me goose bumps or is it it like taking a breath of fresh air?”

Annie explains that they’re always striving for balance in their music. She elaborates, “We want to find the balance between instrumentation and voices, between music and the songwriting while getting our voices to sound as pretty as we can.”

One of the biggest challenges for the band is funding themselves but Annie says, “If you really have your heart in it, there are ways around it through grants and other things. Sometimes you have to go far out of your way to find it, but it is there if you’re willing to go look for it.”

Another challenge for independent musicians is the sheer volume of music now being produced in Annie’s view. She explains, “People have such easy access to recording equipment now. You’re  bombarded by so much original music that separating yourself from casual musicians is a challenge. You have to try and show that you’re passionate about this and that you actually do have something to offer people.”

One challenge that Mandy highlights is finding the balance between satisfying one’s need as an artist while still making music that people want to hear. She elaborates, “I'd love to sing Patsy Cline songs  all day long, but people don't want to hear that. The struggle is to bring in your influences and make them fresh and relevant again.”

The folk music scene in Saskatchewan is growing stronger as time moves on. Mandy explains, “The Saskatchewan folk music scene is breaking out and becoming more accessible for people. More people are turning off their mainstream radio and looking for honest music that they can identify with. There's a fantastic community forming now. You get to know people and it's like seeing old friends again.”

The goal for Sweet Saturday is to make as much progress as possible without compromising their integrity. Annie says, “There are a lot of artists that have a gimmick because everything online or on social media now is about being the biggest or the best. We’re just making the best music we can, the music that we truly love and trying to get it out there.”

Mandy adds, “We’re working towards an album. We're applying for funding and grants currently. It's a beast, but we're tackling it as best we can and moving forward. We want to see ourselves become a louder voice on the Saskatchewan folk music scene. We want to be able to play all over the province.”

One major inspiration for Annie has been the other members of Sweet Saturday. She says, “I hadn’t written a song in several years and when I got together with these ladies, it became a healthy competition between us. We’d each try to write a better song than the next person and that got me going. Since then, I’ve written more songs than I did in the last decade by myself.”

The group also provides a strong source of inspiration for Mandy. She points out, “When we hear other groups play, we look at ourselves and ask if we're measuring up. When we see them, we realize that we are up to the task! The more we play, the more inspired we get. When we come away from a rehearsal or we come away from a gig, we come away smiling.”

There’s also a deep sense of enjoyment that she gets when playing with the band. She says, “I'm a nurse so I work twelve hour shifts and I work a lot. Often I don't get breaks and they are a lot of bad days. When I know that I have rehearsal at the end of the day, it doesn't matter. I know I'm coming home to my fantastic kids but I'm also coming home to Jaimie and Annie. I'm with my friends and we're making music that we love to make!”

For more information on Sweet Saturday, please visit them here. 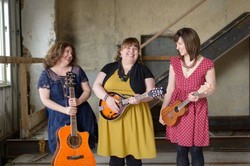