I talk to Jeremy Eisenhauer about performing with his wife as a duo, their creative process and capturing a moment in their musical evolution through recording.

The Eisenhauers is the joint project of Sheree Plett and Jeremy Eisenhauer. Jeremy tells me that they've been making music together in one way or another for 15 years. The couple started out recording, writing songs and putting out albums separately although they toured with a joint band. They'd tour as Eisenhauer going one direction across Canada and as Sheree Plett coming back.

Things changed when they moved to the small town of Kaslo B.C. He explains, "We started playing together as a couple and did a tour together. We tried performing with both of us in front of a single large condenser microphone and it brought a whole new meaning to our songs and the way we performed and played them."

The couple's experience with performing together has been translated into their latest album according to Jeremy. He says, "What we wanted to do with this record was to capture our music live off the floor using a single mic. There's no hiding anything and there's a real energy involved when you do that. We found that way of performing really brought something out of us that we hadn't noticed before."

To help capture that feeling, Jeremy and Sheree chose to work with Steve Dawson* as their producer. Jeremy points out, "We wanted to record with him because he doesn't do much multi-tracking. Most of what he records is live off the floor. He tries to draw out a performance from the artist and that's what we wanted. We wanted to draw a performance out of ourselves that showed where we were at as musicians at that particular time."

The album was an experience that they both enjoyed. Jeremy says, "It was mostly Sheree and I looking at each other through a couple of large diaphragm microphones and playing our songs together. We did all of the recording for it in five days. The album was about not so much about the technical side of things but more about the feeling that we were trying to convey."

Moving to a smaller community, away from the bulk of their family and friends, has allowed the pair the space they needed to co-write in Jeremy's view. He says, "We're less distracted, so we felt that we could collaborate more directly to write songs together."

Their process of songwriting still starts on an individual basis. Jeremy says, "We'll each come up with guts of a song on our own. After that, we'll bring them to one another when we have time. We’ve got three kids and I'm a full-time contractor so life is pretty busy.. We found that if we were open enough and gentle enough with one another during the process, we could encourage one another towards writing better songs in the end. One person comes up with the main idea and the other person edits and suggests changes."

Over the years, the duo has toured across Canada and into the U.S. so they've gained some insight into the world of roots music. Jeremy says that they've always tried to push the boundaries of their music out wider but the kind of music that The Eisenhauers make seems to suit the folk scene. He adds, "Our acoustic sound and our performance with both of us at the microphone is what people associate with the folk music genre. We feel like we have more of a home in terms of what we can say about ourselves and how we can relate to other people in that scene."

With their new album, Jeremy says that they hope to branch out into other venues and tour more widely. He elaborates, "This record will be our first record released by Black Hen Music and that's allowed us to get into some different places we haven't been before. We're going to try to ride that as long as we can and capitalize on it."

Music is something that will always be a part of the Eisenhauers connection to each other. Jeremy says, "It's something that will never stop for us. It's a part of our relationship and our lives. We met playing music and when we fell in love we were on tour with another band traveling across Saskatchewan. Sometimes it feels really tiring to have kids, go to work and make music but it feels like something that we won't ever be able to stop doing."

The way in which music keeps them grounded as people is something that Jeremy finds inspiring. He explains, "At the end of the day it keeps us from thinking we're more important than we are. Music is such a vulnerable thing and you don't always get the good gigs or get people relating to what you're playing and you have to share it with them anyways.  It keeps us from taking ourselves and life in general too seriously."

For more information on The Eisenhauers please visit them here.

This profile is based on a telephone interview with Jeremy Eisenhauer conducted and recorded on April 20, 2017. 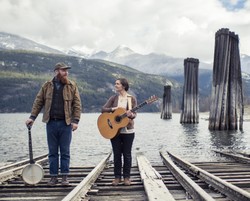