I talk to Alison Schott about making music with her husband, their sources of creative inspiration and all of the projects they've got on the go.

Darrin and Alison Schott are a couple in life and in music. Darrin got his start playing bluegrass mandolin while Alison had a country music background. Alison says, "When we met, he had been on the road with the Good Brothers. They asked him to go on a summer tour with them to play fiddle actually. He did that and it was before he graduated high school. They told him he had to go back and finish school. He wanted to continue playing music but they encouraged him to go back to school first, so he did and then went back on the road with them again."

The couple met in 1986 and started to play together full time in the early 1990's. They toured as a four piece country band. After that, they took time off to have two children and recorded their first CD as The Schotts in 2011.

Darrin and Alison live in a house that has a fascinating connection to their musical past. Alison explains, "Both of our dads played music together in the '60s. We live in the old dancehall where they played. It closed in 1968 which is the year I was born."

One of the Schott's recent projects was to write and record one fiddle tune per week for a year. Darrin chose to do this in order to celebrate his 50th birthday. Alison says, "The project took on a life of its own and ended up as YouTube videos. We named the tunes for villages and hamlets here in Norfolk County. Most of the tunes were created as the weeks came upon us. We drew from different influences whether it was Celtic music, swing or bluegrass on each tune. Both of us learned a lot, it was a great challenge and we achieved our goal."

When it comes to collaborating, Alison talks about sharing the musical duties with Darrin. She says, "For the fiddle tune project, for example, Darrin mostly took care of the melody and I offered the chord arrangements. When we write songs, we'll work separately and come together to collaborate on the finished project. It is lucky because we're married, so we can do that easily. We have 24 hour access to each other!"

Getting music out into the world as an independent musician can be a challenge. Alison explains, "It is definitely a struggle, but we're concentrating on the process of letting it be what it is. It's a journey where we're playing music and things will fall into place as they may."

The nature of their duo means that they appeal to many different audiences in Alison's view. She says, "If you look at the gigs that we did last summer, we played at a country festival, we played a bluegrass festival and we played at a rock festival. We classify ourselves as bluegrass/alternative folk but as a duo we fit into a lot of different places."

In an increasingly digital era, people are looking for live music experiences and The Schotts are doing their part. Alison says, "We're trying to encourage that live experience. One way we've done that is the Home Routes house concert tours. Our songs are about where we're from and our experiences. They really lend themselves to the house concert experience."

Although they're driven by major goals, Alison says that they've still got projects on the go. She points out, "The main thing now is getting this new CD out. We're also in the process of possibly releasing a book and DVD from the fiddle tune project. The project that we're doing as the Sandplains Pickers is great because the other musicians are incredibly talented as well. It's down to Darrin and I being happy doing what we're doing."

The constant surprises and the diversity of experiences is what keeps the Schotts motivated. Alison says, "We're always looking for that next surprise and letting it lead us where it may. Taking those leaps and allowing yourself to take a risk, not knowing where it might lead is magical. We're malleable and we want to be continually growing and learning."

For more information on The Schotts, visit them here.

This profile is based on a telephone interview with Alison Schott conducted on June 5th, 2017. 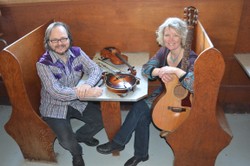