I talk with The Young Novelists' Graydon James about the creative process for the band, his pride in being a Canadian artist and where he finds his motivation.

The Young Novelists came about as a project after Graydon James' previous band "imploded for various reasons" as he puts it. He recorded the songs he'd written for that band and decided to tour with that album. Graydon says, "The album sounded like there was a full band on it, so I realized that I wasn't going to be able to tour it properly as a solo artist. I asked a bunch of people that I'd known from other bands I'd played in to work with me and we rehearsed for two weeks, went on the road for two weeks and at the end of that we were a band."

Although Graydon is the band's songwriter, he feels that the songs don't truly take shape until the entire band has worked on them. He explains, "There's a lot of refinement and change that happens over the course of rehearsing the songs. It gives everybody the ability to put themselves into the songs and influence how things sound."

Most of Graydon's songs start with the music first. He starts to play with the music until a lyric occurs to him. He says, "I've found it best if I play with the music for a while and then step away from it. For example, on the last album, I wouldn't be getting anything for 30 minutes or an hour, so I'd take a break and go have a shower. As soon as I got in the shower, I'd have an idea for a first line so I'd go through the entire shower singing that line over and over again to myself and then I'd come up with a second line and third line after that."

Graydon's wife, Laura Spink, sings harmony with him on the album and she's an integral part of The Young Novelist's sound. Graydon points out, "Laura is hugely talented as a vocalist -- and as a harmony singer especially -- because not all good vocalists are good harmony singers. It's a pretty specific skill and she's just amazing at being able to blend her voice, so it certainly is a case of the whole being greater than the sum of its parts. I think that the result is much more interesting than if it was only my vocals.”

The major difference between the band's live shows and their current album is the number of songs that they perform with Graydon and Laura as a duo. Graydon says, "We tour quite a bit and it's difficult to have all of us touring at once. We've come up with duo arrangements for most of the songs. There are some songs we really don't play as a duo and there are even some songs when we're playing as a band where the band will be off the stage and we'll play songs as a duo because they just fit that sensibility."

One thing that Graydon highlights in terms of music in Canada is the strong level of support that exists for the arts. He says, "I truly appreciate it especially after touring in the 'States a lot. They don't have that level of artist support and the grant system that we do. The system we have isn't perfect but it is extremely helpful.”

The calibre of music coming out of Canada is something else that Graydon points out. He says, "The level of music that seems to come out of Canada is really strong. We have a population 1/10th the size of America’s but there are lots of Canadian artists touring in the U.S. and doing well there. I think that says something. I think partly it says that the funding is great, but it also says that there's talent there to be fostered.  I'm pretty proud to be an artist from Canada.”

The biggest goal that Graydon hopes to achieve in the future is to continue making music his chosen career. He explains, "My goal is to have music be a career for the rest of my life. Having said that aloud, it does sound like a taller order than that. It's tough to do but I think it's totally possible. but I have a lot of faith that I can do it if I put the work in."

Graydon has spent some time thinking about his motivations for continuing to make music. He says, “There’s an Ira Glass quote about the fact that when you start out as an artist, your taste is far higher than your talent. You have this high level of taste, but you don’t have a very high level of talent. It takes a while for your talent to develop to the point that it matches your taste.”

He adds, “I haven’t gotten to the point where my talent has developed to the level of my taste, so I’m still making art that I don’t think is particularly good but hopefully I’m going to get there. It’s important to me in a personal sense to reach my goal of writing a song that I actually think is a decent song. Maybe I will or maybe I won’t but I think that’s the thing that motivates me.”

For more information on The Young Novelists, please visit their website here.

This profile is based on a telephone interview with Graydon James that was conducted and recorded on Oct. 14, 2016. 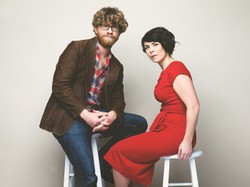