I talk to Tom Fitzgerald about fiddling, the joy of sharing music and the band's sources of inspiration.

Although Tom Fitzgerald and his siblings grew up in a family that enjoyed playing music, they had no history of fiddling or step dancing. This all changed when they were young children. Tom explains, "Our cousins had somehow gotten into fiddling and step dancing contests, so we started going to those and just checking them out. Before we knew it, we had found teachers and had started learning how to fiddle and step dance."

While the Fitzgeralds were raised in the Ottawa Valley tradition of fiddle and stepdancing, they have since expanded their musical vocabulary, absorbing everything from bluegrass music to celtic, jazz, R & B, pop, and even some electronic music.  Tom adds "We're trying to combine all of our different influences into our own sound and style of playing".

Composing music is something that all of the siblings are now doing for the band. Tom points out, "We get along well together but we don't always do our best work when we sit down together. Instead we each bring our own fully formed ideas to the group and we work together from there."

Their background in step dancing means that, for Tom and his sisters, it's an inseparable part of their music.  He says, "The Ottawa Valley style of fiddling that we grew up with was born out of dance music. It was what you played at square dances and ceilidhs. Danceability is a big part of the music that we choose to play. "

He adds, "In the show we do a lot of step dancing. Generally people will comment on the dancing in our shows and that's what they'll remember. The style of dancing is very energetic, positive and upbeat."

While many musicians might go into the studio to record, the siblings decided to record their latest album at home. Tom explains, "Everyone has their own opinion but I think I find (and we all find) that the recording studio can be a little too high pressure. There are definitely benefits to going into a studio but we chose the comfort of home. It calmed everybody down and we were more relaxed about recording."

Trying to replicate the musical experience of a concert in a recording is important for Tom and his sisters.  He says, "What we play live is what you'll hear on the recording. We're trying to be a little more coherent with the recording being the representation of our show."

One of the challenges that all of the Fitzgerald siblings face is that they're still in their 20's and as Tom explains, "Everyone's still trying to clarify their vision of exactly what they want to do. We all want to be professional musicians but we've come to realize that this group doesn't have to be all encompassing thing. We can all have our own projects but we need to figure out how it's all going to work."

Another challenge comes from being independent musicians in Tom's view. He says, "We do all of the logistics and we contact promoters/presenters ourselves. If you don't have a team behind you, you have to do it all yourself. My sisters especially have developed some really good business skills but even with that it's pretty difficult to make time in the day for other things."

Fiddle music is alive and vibrant from Tom's perspective but he says, "Being successful and making a living at doing this requires a lot of work to establish yourself and show what's unique about yourself and your music. You have to find your niche. My sisters have shown that you really have to hustle. They're as good hustlers as they are musicians. It's allowed us to do music full time. We've never had jobs doing anything else, so we realize that we're really lucky."

The future is wide open for the band. Tom says, "It's hard to plan too far into the future but we have committed to a couple years of touring. We love playing music with each other and we realize that we have something unique in being a family. People at shows tell us that they can see how we really connect with each other! Hopefully we'll keep growing  as a group but if people get other opportunities we're pretty open to those too."

One of the major inspirations for Tom and his sisters are the positive experiences they have with people who come to their concerts. He points out, "Sometimes after a show, someone will come up to you and thank you for the show. They might give you a personal story about how the music affected them. It doesn't happen every day but when it does, it is very inspiring."

Another big inspiration for him is all of the good music being made in the world. Tom says, "Every day it seems like you're discovering lots of cool new bands with great new ideas and sounds. As long as there's new music coming out, I'll always be interested in it!"

For more information on the Fitzgeralds, please visit them here.

This profile is based on an interview with Tom Fitzgerald conducted and recorded on Dec. 14, 2016. 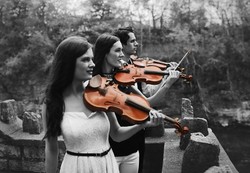