I talk to Trevor Alguire about his sources of inspiration, the joy of working with great musicians and how he goes about crafting songs.

Trevor Alguire grew up in a musical family and that experience lit a fire under him. He began playing guitar at the age of 10 and had a series of bands throughout his teenage years. He goes on to say, "I came into the songwriting thing after a couple pretty successful bands. We were starting to get out of town and play some shows. I realized that I could write a song and go that route as a musician, so I started putting some guys together when I needed them and that's the way it went. I was in my late 20's by then. I'm a late bloomer but for the last 12 years or so I've been on the road touring."

The most important criteria for any song that Trevor writes is that it has to be real. He explains, "I can't write just for the sake of writing. I can't write  fiction, it has to be something that I feel. For me, it's about being the dad of two kids, having a wife, and going through everything in life. People say some of my songs are dark but the things that you go through in life can be dark. Writing songs is my way of translating those feelings and getting them out."

His newest album Perish In The Light is the truest to his character in his opinion. Trevor says, "It's just real. I wasn't trying to have a certain sound or generate a certain feeling. I figured that I'd just keep doing what I've been doing, and if people liked it that would be great but if they didn't at least I'd have a clear mind."

Trevor doesn't try to force songs out of himself. He points out, "I wait for the musical voices to start talking to me and that's usually when I start thinking that I'd better start documenting it and writing it down. Once the ideas start to form, they come into a place where I can definitely work with them. It has to be about something that has troubled me or hurt me deeply or made me feel amazing. It's my way of working through life."

Writing songs with universal appeal is important for Trevor. He says, "I was in Germany playing in front of a crowd of 120 people in this old church. We were chatting back and forth between songs and I said to them, 'I really appreciate you guys letting me record all of my baggage and just dropping it on you.' They roared with laughter! That's a universal thing right there. It was kind of a funny moment but that's the way it works. A lot of songwriters write for survival. It keeps your mind where it should be."

He has high praise for the musicians with whom he worked on Perish In The Light. He says, "It's strange because I've always just kept doing what I'm doing but now I've got a lot of people believing in me. It really adds something special when people believe in what you're doing whether it's Miranda Mulholland1 who played fiddle on the album and really put her heart and soul into it, Bob Egan2 who played pedal steel and who was really excited about the songs or Catherine MacLellan3 who sang a duet with me on My Sweet Rosetta. I had written the song in the hopes that she'd sing it with me."

He continues, "Jeff Asselin on drums has been on my last three albums. He's an amazing drummer and a really great guy. Stewart Watkins was the bass player, he played for years with The Tenors. He's just a solid bass player. The rhythm section with Jeff and him just kept everything locked in. The three of us played live and recorded the foundation of the album."

Right now, Trevor's main focus is on touring with Perish In The Light. He says, "I'm focusing on making sure people hear this new album. It's been well received in Europe so I'd like to get back over there and play. I'd also like to go back across the country maybe later in the year. For me, it's about trying to make the best music that I can make. I think of my music career like just a bunch of paths worn in the dirt and I hope I can go back down them in years to come."

He has concerns about the music industry when it comes to generic pop music and DJ's who regurgitate the same tunes over and over again but Trevor adds, "Sometimes it feels like it's lost but other times it's amazing. You can be in a small town in northern Alberta and people will be singing along with you at a house concert. I prefer sitting in front of thirty people, playing it the way I wrote it either solo or with a duo or a trio. I think that's where people are keeping things alive. It does take work and it does take people trying to cultivate it in the community."

There are two major streams of inspiration for Trevor when it comes to his music. The first source is all of the "workhorse songwriters" like John Prine, Kris Kristofferson, John Hiatt and Willie Nelson. He points out, "I love guys like that who keep writing songs and singing them until the day that they can't do it any more. It's like that for me too. As long as I can be duct taped to a microphone stand, I'll be doing it."

1. Miranda Mulholland is best known for her work with the Great Lake Swimmers.

2. Bob Egan has played pedal steel for Blue Rodeo and Wlico among many others.

3. Catherine MacLellan is a Canadian singer/songwriter.

For more information on Trevor and his music, please visit him here.

This profile of Trevor Alguire is based on a recorded telephone conversation conducted on Dec. 19, 2016. 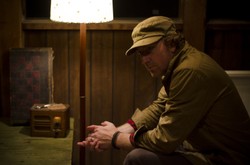