Twin Flames tell stories about the experiences of indigenous people's lives through song in French, English and Inuktitut.

Twin Flames is a unique duo of two musicians who represent the broad span of indigenous experience within Canada. Jaaji (pronounced Yaah Ye) is Inuk and Mohawk and Chelsey June is Algonquin Cree and Métis. They combine their unique backgrounds and histories to create compelling, deeply emotional music that speaks to people and seeks to build bridges between communities.

The couple met in the summer of 2014 when they were both chosen to be part of the APTN series called TAM that showcased Aboriginal musical talent. Chelsey explains, “We met around a campfire where everybody was jamming and having fun. We started singing together before we even knew each other's names. We kept in contact after that first initial meeting and decided that we would get together in the future and try to play some music together."

Not only did they end up playing music together but they fell in love and became a couple. Chelsey continues, "Jaaji invited me to come along on an Arctic summer tour for our first summer of touring. It was an incredible experience! We were very lucky that our last solo albums were both nominated for the Indigenous Music Awards in 2015. It gave us a good platform to launch Twin Flames and solidify who we are as artists and share that with people."

Initially, the band took a while to break through. Jaaji says, "Some people didn't take us seriously because we weren't at the big festivals that you have in the major cities in the South. For us, music is music and we went where people wanted to listen to us and that happened to be in the North. Since our rapid ascent, people are actually keen to listen to us throughout Canada.”

Chelsey adds, "We still play a lot of really remote communities we love it. We have also branched out throughout the South it's great to see that Canada is starting to see the unity that we stand for. We really try to represent every day Canadians, no matter their background. Canada is a merging of cultures and we're just trying to represent that through our music and the message that we're all human."

Jaaji emphasizes Twin Flames' focus on crossing boundaries. He says, "We try to tell a story before the song and use the song and the emotions to captivate our audiences. Music doesn't have a religion, a language or a culture."

Currently the duo is focused on releasing their second album. Chelsey points out, "This is one album that we're hoping will break into mainstream Canadian music. There still seems to be a line between Aboriginal music and Canadian music. It's great that as Aboriginals we are recognized for the work that we're doing, but at the same time we want to be there with everybody else. There shouldn't be a difference or any lines drawn in the sand."

The songs that Twin Flames write come about in different ways according to Jaaji. He says, "When we have a thought or a dream, we either start humming or reciting the words to each other just to keep hold of the words. When we're writing songs, we go through the process of structuring the song. We put the phone on record and just let it go until we get the song the way we want it."

The band is often inspired by their personal experiences and people that they meet on tour. Chelsey elaborates, "We do a lot of work in mental health and suicide prevention with everyone from youth to elders in our communities. Initially, our songs come from the heart and then we ask ourselves about the hope and healing that we're trying to show within that song.

People seem to feel that our songs accompany them through each phase in their lives. We have many people thanking us for our music and how it's been a huge support in their lives, we are very humbled by that. "

There have been challenges and opportunities along the way and they've often been intertwined. The couple has children and touring has been hard on them but Jaaji says, "When we have to travel that much obviously we miss them dearly but we don’t tour for long periods of time and find ways to balance music and parenting.”

The band is entirely self-managed which has been both a challenge and an opportunity. Chelsey explains, "We manage all of our social media, tour bookings and even our own website. Sometimes people don't take you seriously when you're not represented by management or by a label. It's changing in the music industry now. A lot of artists are doing a lot of it themselves. We are business people as well as artists and we're able to take on anything that comes our way."

Chelsey talks about building bridges across cultural boundaries. She says, "When I first started touring in the north, some people instantly accepted me and other times it was like, 'We don't want her on stage.' I understood what lay behind the external colour of my skin and all the years of mistrust and hurt that are associated with colonialism, so I didn't take it personally."

She adds, "I just took the time to build trust and relationships with people, you just have to work a little bit harder. Now they call me the 'inlaw of the North' and every door is open to me. It's just been incredible and it warms my heart."

The same challenges and opportunities also exist in bridging the gap with southern audiences. Chelsey explains, "A lot of people are unaware of the Inuktitut language. If they don't understand what's being said, they don't necessarily want to listen. People needed to take the time to hear our stories first and then feel the music.  We've sparked their curiosity and now they want to learn more. We've really seen that bridging of cultures. We're at the front lines of that and we're very excited by the opportunity."

As they work on their second album, Jaaji points out that they've learned some lessons about recording. He says, "Having a strategy gives us the time to develop the songs. When we did the first album, we had to rent the equipment, so we ended up going the whole summer without recording anything. We were too busy with shows and touring. On the last day of recording, we still had eight songs that were unfinished. The project still ended up turning out well, but we don't want to put that stress on our new producer or ourselves again."

Twin Flames' sound has been refined in the past year according to Chelsey. She points out, "We've revamped the band and the musicians who are surrounding us. We've got a good team together now that's true to our messages and the music itself. We've changed our sound and removed electric guitar as well as a whole drum kit. Our drummer is more of a percussionist now. He plays a traditional war drum as a kick drum, a T-shaped cajon and shakers.  Along with my hand drum, there's a more tribal, organic feel and we love it.”

Of the band’s future goals, Jaaji says, "Our goal right now is to get as many shows as we can within Canada. We also hope to visit other parts of the world. We hope to line up a European tour in November or December. Maybe when it's cold outside in the winter, we'll head down to the summer in Australia or New Zealand."

Chelsey talks about her sources of musical inspiration and says, "Life inspires me. Music has always been a part of me since I was born. I feel that anybody who is given a gift and can use it is very lucky. Music is always what I go to for anything. If I’m having a bad day, if I need to vent even if I’m having a good day it’s my way of processing. Music is my comfort. "

In terms of his inspiration, Jaaji says, "For me, the amount of respect and gratitude that we have both received from our fans, the messages that we get about how much we've helped them and the number of face to face meetings we've had with our fans pushes me to continue to do more and continue to have songs of hope."

Collectively they draw inspiration from having lives that revolve around music. Chelsey says, "We get one life, we're here and we can't waste our time with things that don't make us happy. The fact that we get to do it means we're grateful every single morning that we wake up. We get to live our dream every single day creating music."

For more information on Twin Flames, please visit them here.

This profile of Twin Flames is based on a telephone interview conducted and recorded on Apr. 10, 2017.

Thanks for the share Mr Magi, really appreciate your interview from the both of us 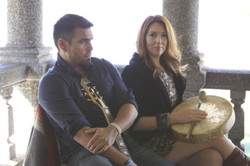