I talk to Naomi Shore and Lindsay Pratt of Twin Peaks about sassy singing, creativity and the closeness of the roots music community.

The warm harmonies and sassy lyrics of Twin Peaks combine to create a unique musical experience. Lindsay Pratt and Naomi Shore first connected when they were solo artists in Fort St. John, B.C. They found a lot to respect in each other's music and decided it was worth teaming up to form a duo. They've now been playing as Twin Peaks for five years.

The pair had quite different musical backgrounds. Naomi says, "We were raised on opposite ends of the musical spectrum. I was raised on big bands, jazz and blues. I took classical piano training as well. Lindsay was raised with '70's classic rock and songwriters like Leonard Cohen, Bob Dylan and Joni Mitchell."

The main lyric writing is done by Lindsay. She elaborates, "Sometimes Naomi will bring me a chord progression and I'll add lyrics to it. Sometimes we'll help each other to finish songs and sometimes it's a complete collaboration between the two of us."

Naomi adds, "What people really like about Lindsay's lyrics is the sassy, real attitude. We also embrace our northern surroundings. Every now and again Lindsay writes a new song and she'll drop an F (as in feminism) bomb into the lyrics. Our female fans especially love our writing because we don't mince words."

When it comes time for Lindsay to sit down and write the songs, she does so very directly. She points out, "It happens really naturally. I don't do a lot of editing. What comes out is what I write down. I don't spend a lot of time going over and over songs. Pretty much what's in my head is what ends up in the song."

On their last award-winning album entitled Trouble the pair supplemented their performances with a backing band. Lindsay says, "A lot of times I think the emotion and feeling that the band gets comes from the basic structure of the song. They add a lot to the emotion behind it."

Naomi adds, "We worked with the Cumberland Brothers. They're a bluegrass band from Vancouver Island. Since they're also a roots duo, they understood what we were trying to do on the album."

Playing with different bands and musicians has added new perspectives to the music that Naomi and Lindsay make. Naomi explains, "It's been great to hear the new songs we've been writing backed up by lots of different people. We're always excited to hear what other people take from our music. We just play them the general melody with the lyrics and they add their own interpretations to the songs."

When Twin Peaks goes on tour, they mostly work as a duo. Naomi says, "Our touring show is a pretty basic version of the album. What we're really selling is the melody, our harmonies and the lyrics, so you don't need a big band to get those across."

One challenge that Naomi and Lindsay face is the large number of musicians in B.C.  Lindsay points out, "Sometimes it can be really hard to get gigs. When we were in the Yukon, we noticed that the artists there have amazing support because there aren't as many of them."

Another challenge, although one that is a conscious choice, is that the duo continues to base themselves in Fort St. John. Naomi says, "We're pretty isolated which has been our choice. We like where we live but sometimes it makes it complicated because we are so isolated."

The roots music community is something for which Lindsay has a great deal of praise. She says, "We've had really good fortune to meet amazing musicians and people who can and do help us. People back us up because they enjoy our music and also because they like us as people. We haven't just made friends with other musicians but it's allowed us to find mentors as well."

Naomi adds, "The producer for our last album, Barry Mathers from Kelowna, was a giant help to us. He believed in what we were doing from the get go. He's been in the business for a long time and he was super supportive."

Over the five years that Twin Peaks have worked together, their relationship has evolved. Lindsay explains, "To be honest, in the beginning we had a hard time getting along, since we are so different. It really helped our stage presence because our strengths and weakness are different. It has helped us in some ways and over the years we've become really good friends. We have way better communication skills now."

Along with that evolving relationship, Naomi and Lindsay have also begun to tour more. The touring has had an effect on their music evolution too. Naomi says, "The more festivals we've played, the more music we've been immersed in. A lot of it is music we wouldn't seek out on our own, so it's been very inspiring to both of us in terms of writing."

In future, the pair want to expand their scope of touring even further. Naomi says, "We hope to get all the way across in Canada in the next year or two. We're planning on going to Australia next year and maybe jump over to Europe for a bit. We want to expand the tour and put another album out next year once we generate some cash to do that."

Inspiration and motivation come from many sources for the duo. Lindsay says, "Naomi and I were both raised in musical families, when it's in your body since childhood it's a big influence. I've been singing and making up stories since I was a toddler. My parents were big on encouraging my imagination and creativity."

Naomi adds, "We're both using writing music and lyrics as a therapeutic tool. Even if you're not writing to make smash hits, you're writing because you have to get it out."

This profile is based on an interview with Naomi Shore and Lindsay Pratt conducted and recorded on Sept. 24, 2016. 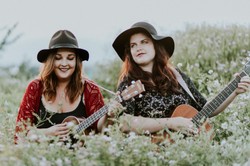