I talk to Union Duke's Matt Warry-Smith about the band's approach to music, the songwriting process and his views on the Canadian roots music scene.

Matt Warry-Smith has been friends with two of his band mates since high school. He explains, "Me and two of the guys, Ethan and Jim, played in bands together in high school. Eventually we had a band that we wanted to take as far as we could, but it didn't work out. After that, Jim bought a banjo and we started making folk music. We found the other two guys, Will and Rob through friends of friends over the course of a couple of years. Union Duke has been together for four or five years at this point.”

The main sound of Union Duke is folk rock but the band members all have different musical backgrounds. Matt says, "Me, Jim and Ethan all have a rock background, but Rob definitely brings more bluegrass style to the table. We also have country influences, so we get compared to Blue Rodeo sometimes. At our core we're a pop rock band that focuses our music through a folk, country and bluegrass lens."

The band likes to write songs to which people can relate according to Matt. He points out, "I write songs to tell a specific story but I make it broad enough that anybody could put themselves into it. I want to tell a story that's affecting, makes people think and talks about universal feelings like friendship, love, loss and fun. We just like to write relatively simple, to-the-point songs that have people tapping their feet and thinking about them."

There are a variety of approaches that the band takes to writing songs. Matt says, "Sometimes I'll write a song from beginning to end with all the music and lyrics. I'll bring it in and teach it to the guys. Sometimes I'll write half a song and we'll finish it together and sometimes two or three of us will write songs together. We all trust each other enough to write a song that we think is going to be good."

He adds, "There's a lot of editing that happens for us. For a 12 song album we'll write 35 songs and try to cut the list down to the best songs. We write a lot, we write together and separately and we see what shakes out."

The band's latest album is called Golden Days and was released in August 2016. Matt says that it was an album on which they spent a large amount of time and continues, "We wrote songs that tell a unique story that you can put yourself into and enjoy. Generally we consider ourselves to be a live band more than a studio band, so for the first time we recorded an album live off the floor to capture that energy.”

He continues, “We recorded it in a great studio in Toronto called Canterbury Studios with our good friend Andrew Mullen and we had it mixed by an amazing guy named Mark Lawson. He's a Grammy award winning producer for Arcade Fire and a bunch of other people. We're super happy with the result."

Although there are many challenges for independent musicians, Matt focuses on the positive aspects of making music. He says, "There's always going to be challenges that come from making music but we're so fortunate to be able to travel all over Canada, make records and play shows. There are a lot of amazing people all over Canada who really want to help folk music to thrive and we are lucky to live in a country that does that.”

Canada's strong tradition of folk music has seen it continue to thrive. Matt points out, "There is a tradition and a history to folk music in Canada whether you're talking about Ian & Sylvia, Joni Mitchell or Neil Young. It's really cool that there's such huge support for it and that there's government money allocated to supporting arts organizations.

In the fall of 2016, we toured the prairies and played a bunch of conferences where a few bands get to play for a whole bunch of presenters who are connected to small communities all over Alberta and Saskatchewan. I never would've ended up in those small towns otherwise. The community and support that exist for folk music in this country is amazing."

Inspiration is something that is all around them for Matt and his band mates. He says, "I can't speak for the other guys except to say that we all share a passion for music and creating. On a personal level, a lot of my family worked in the arts and when I was a kid I was lucky enough to get to see my parents, my relatives and adults who I respected live an artistic lifestyle. If I can continue riding this wave, creating and making music and connecting with other people through that, it's the most important thing that I can do with my time. Why wouldn't I keep at it as long as I can?"

For more information on Union Duke, please visit them here.

This profile of Matt Warry-Smith is based on a telephone interview recorded on Feb. 28, 2017. 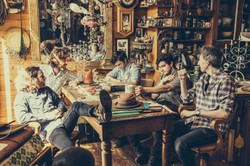