I talk to Béatrix Méthé of Les Poules à Colin about finding inspiration in tradition, innovation based on that tradition and where the band goes in the future.

Béatrix Méthé is the lead singer and one of the fiddle players in Les Poules à Colin. She explains how the band got started. She says, “Colin and I first started playing in a family band when we were just kids. It was called Dentdelion and Colin's mother, Denise Levac, and both my parents, Dana Whittle and Claude Méthé were members.”

Colin and Marie are brother and sister. The other band members' parents knew each other, as they were also musicians, so they saw each other at various festivals and parties as they grew up in Québec’s traditional music/folk music scene. She explains, “Marie and Eleonore, who were studying jazz/pop in school, had a project to start a trad group and asked us to join it. That's the beginning of Les Poules à Colin! We then invited Sarah to join as she was moving to our region to study.”

The band’s music is firmly rooted in the traditional music of Québec, North America and Celtic traditions from around the world. Méthé says, “We aim for a traditional sound with acoustic instruments such as the fiddle, banjo, mandolin, guitar and foot percussion. We compose and play reels, jigs and waltzes but adding the piano, the Rhodes and the electric bass really gives us the opportunity to bring our sound to another level, taking us away from the traditional music that we are used to hearing.”

She continues, “We like to play around with chord progressions and add a good number of effects to our instruments to make them sound different than they usually do. We feel totally free to experiment and create around a tradition that is so strong and rooted.”

Les Poules à Colin work as a team when it comes to song writing and arranging. Méthé says, “When someone has the slightest bit of an idea, whether it's a melody, a chord progression or lyrics, we work with it and feed off of each other’s ideas.  There is no real band leader, no one person works more than another when it comes to the creative process. Everyone finds their way in the arrangement and is responsible of 1/5th of it!”

One of the biggest challenges in the music industry, in Méthé’s view, is building a strong team to support one’s band. She says, “Luckily the five of us are the best buddies in the world, and we have an amazing agent that is working very hard to get people to listen to our music! We first starting playing music for fun as friends so one thing that is important for us is to remember why we are playing music together.”

The folk music scene in Canada is something about which Méthé feels positive.  She says, “We’ve had the chance to perform at some of the top folk festivals in Canada and it's always the best experience! It's a huge world, but it still seems small and feels like a family. Everyone plays together, everyone knows each other, it's just great! The folk scene is growing bigger as there is more and more interest in this type of music.”

The band members want to have a lifelong involvement with music according to Méthé. She says, “We've been together for almost eight years already (and we are still very young). This band is such a big part of our lives that it's hard to imagine it not existing. We plan on making many more records and we hope to perfom them around the world!”

Méthé’s prime motivation as a musician is hearing more music. She points out, “The more I listen to music, the more I want to make some! I think that's the main thing that motivates me as an artist. You're constantly inspired by what you see and what you hear and your mind just keeps making place for more ideas. To me that's the essence of creation and the reason why I can't help myself from doing it!”

This profile is based on an email interview with Béatrix Méthé. 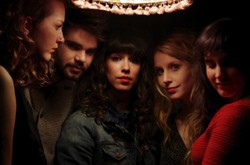