I talk to Braden Gates about musical inspiration, song craft and what keeps him motivated.

Music has been a part of Braden Gates’ life for as long as he can remember. His father, Troy Gates, is an old time fiddle player and a guitarist. Gates says, “I grew up around that music since I was in a crib and I started playing fiddle when I was big enough to hold one and that’s the root cause of it all.”

Songwriting is Gates’ lifeblood. He pursues it with passion and vigour. He explains, “I’m just trying to write songs and capture every day, personal experiences. I want to capture a little piece of myself that will be relatable to other people. I try to look at things in a unique way in my songs.”

His songs are always inspired by finding beauty in every day things. Gates tries to take that observation and craft it into something more universally applicable to his listeners.

Initially Gates waited for inspiration to seize him before he wrote a song but he’s refined the process. He says, “I do a lot of wandering around and I write songs while I’m doing that. I keep a 90 dollar guitar in my car. I try to focus on writing consistently every day instead of waiting for it to happen.”

Although Gates is a singer/songwriter first, he also plays the fiddle to add some variety to his shows. He points out, “I don’t play many instrumental tunes but my first creative output was making up fiddle tunes. I still play fiddle in my shows. Fiddle is great, people love it!”

Many of the great singer/songwriters have acted as inspiration for Gates. He says, “My first influence was John Hartford because he was a fiddle player and a songwriter too. Guys like John Prine and Guy Clark (who just passed away) as well as Townes Van Zandt are also really inspirational. I’m really into Vic Chestnutt right now too.”

Gates’ view of the current state of folk and roots music in Canada is a positive one. He points out, “I think its strong and I think it always will be strong because folk and roots music is music that lasts.  There are lots of good musical communities out there and because the scene is based around community, the songs will last.”

The two major challenges that Gates finds as an independent singer/songwriter are navigating his way through the business aspect of making music professionally and keeping himself healthy and creative while committing himself to a life of music. He adds, “It’s a matter of committment to the craft and getting better every day as well as  surrounding yourself with people who can better you.”

Recording is something that Gates enjoys. He says, “I’m recording an album now that’s just me and the guitar. It’s not a super produced kind of thing. Recording keeps you on your toes.”

On the other hand, he takes pleasure in the interactions he has with the audience. He explains, “The live show is great because you get to interact with the crowd which is the cool side of folk/roots music. It’s also the storytelling aspect of the music.”

Ultimately his passion for writing good songs is what keeps Gates motivated in his career. He intends to keep on making music, crafting interesting songs and working at honing his material well into the future.

This interview with Braden Gates was conducted via telephone and recorded on May 19, 2016. 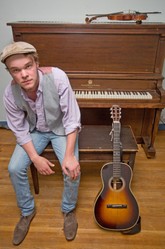