Growing up in a Franco-Albertan family with roots that include a Franco-American grandfather and an Acadian great grandmother, Crystal Plamondon was surrounded by traditional Acadian and Quebeçois music as well as country music performed by artists like Lucille Starr and Dolly Parton. She says, “I just started playing music when I was about ten.”

She continues, “When I first got my band together 27 years ago, people told me that it cost extra money to have more musicians in the band but me being näive I thought, ‘Well you have to have a fiddle! You have to have an accordion!’ As the years go by you realize that it’s gravy to have that cool stuff but I thought it was just natural.”

It has taken Plamondon a good chunk of her career to finally embrace her status as a professional musician in her own mind. She explains, “I have finally realized that this is a part of me. I didn’t choose it, it chose me and I just have to run with it. I was doing it earlier to raise my kids and that’s how I made money so that’s what it was. Now I’m 52 and I realize that I’ve been blessed with this gift!”

She adds, “Not until On A Song and Prayer in 2009, did I finally embrace it and decide that I had something to say and that I wanted to write some more songs. Now it’s cathartic, it needs to come out and I need to create!”

Although her career has taken an unconventional path, Plamondon is happy for how things have developed. She says, “For me it wasn’t about being a star. I thought, ‘Oh my gosh! I’m making music and supporting my kids, I’m seeing the world. I can’t even believe it, I’m loving this job.’  I’ve been blessed for having what I’ve had and it’s not over. Things are just moving towards more choice roles and more choice shows. It’s cool!”

Song writing is a process of starting with a theme, a melody or a line for Plamondon. She points out, “If I have time, I’ll do it right away but I don’t usually so I’ll write the lyric or record the line and then  in the winter I write three days to a week, I binge write. I’ll put down a bunch of songs from the ideas I’ve had. “

She points out, “If I’m writing with Gord Matthews (who I wrote the last album with) I’ll do some part stuff and I’ll say this is as far as it’ll go. I’ll bring three songs to him and we’ll work it out from there.”

Plamondon loves live performances but touring a little less so she wants to change her focus in the future. She says, “I want to do more work in television and film. I feel it’s really rewarding! I love working in the studio and I like producing.  I like that at the end of it, there’s something there, like an archive. We’re lucky as artists because when we pass away, a piece of us stays here.”

One strand of Plamondon’s inspiration comes from immersing herself in other artists’ work and surrounding herself with beautiful things. Another strand of her inspiration is delivered by storytelling in her songs. She says, “In the past, I wrote a lot about love but now I find that I’m writing stories. It pushes me as a song writer because melodies have always come more easily for me but coming up with the words to tell a story is intriguing and challenging.”

For more information on Crystal Plamondon and her music please visit her website here.

This profile is based on an interview with Crystal Plamondon conducted and recorded on June 1, 2016. 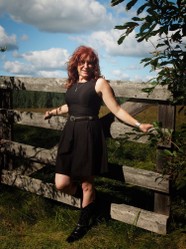