Eliza Doyle is about to release her first solo album. The Saskatchewan-based banjo player has spent many years as a part of different musical projects, but It Ain’t What It Seems is a chance for her to fully showcase her songwriting abilities and musical range.

Eliza grew up in a musical family. Her father played banjo and her mother was a fiddle player, but she didn’t pick up a banjo until her second year of university. She explains, “My dad found an old banjo in a shop in Northern Saskatchewan. They cleaned it all up and tried to figure out who would want it. Eventually they decided to ask me if I wanted it and I said why not?”

At that point, she started playing with a friend who was busking and discovered that she helped draw people in while playing the banjo. She continues, “After some time working with him, I started busking on my own. For the first year, I just went up to Halifax and my friend and I went on a road trip. I brought a mandolin along and taught her how to play it and I just found that high energy banjo music attracted a lot of people!”

The genesis of It Ain’t What It Seems were some gentler, slower songs that Eliza had been writing on guitar. She normally shies away from playing less energetic music, but friends persuaded her that her more introspective songs were worthy of more attention.

As for the theme of the album, she explains, “The overall theme of the album is the unknown and viewing it through the life of a person who is single and independent. It's about the freedom that gives you and also the challenges that come along with that freedom.”

Songs like High and Lonesome and Say It deal with relationships and their endings. Eliza says of them, “The one thing that someone who is 34 and single has is relationships that have ended. It definitely comes into play.”

Another thread that runs through her songs are stories of hardship and personal struggle. Eliza points out, “I take an interest in people's stories of hardship. I taught at risk youth in high school for the last six years, so I worked with kids who had addictions and came from dysfunctional families. I definitely have an empathy for the trials and tribulations of people's lives. With songwriting, you try to go to the depths and reach people's heartstrings.”

Eliza’s songs often start with a basic idea inspired by the experiences she’s heard about or been through. She adds, “I take those ideas and figure out how the person in the song is going to resolve the situation that they're in. I try to paint a picture of somebody's life in the songs.”

The title of the album It Ain’t What It Seems has several meanings for Eliza. She says, “It Ain't What It Seems refers to the dichotomy between the high energy music I've been making and the slower, more sensitive side of me that's shown on the album.”

She continues, “It also comes from the fact that I never saw myself quitting my teaching job at 34 and putting all of my money into releasing a music video and touring under my own name.”

The songs on It Ain’t What It Seems vary between bluegrass-style stompers and folkier ballads, but this is not intentional on Eliza’s part. She says, “I don't aim for anything when I write and I don't really think about genres. The differences come from writing with a guitar instead of writing with my banjo.”

The musicians who play with Eliza on this album include Lucas Geotz on pedal steel, Lydia Azure and Ryan Spracklin on fiddle, Paula McGuigan on bass and Liza Holder on guitar. Eliza is a fan of working collaboratively in bands. She says, “I like instrumentation. I like mandolin and pedal steel and fiddle.  When it comes to painting a picture and a mood, I love the pedal steel and there were certain songs that I wanted fiddle for.”

Eliza’s creative outpouring isn’t done yet. She says, “There were 18 songs on the table for the album.  I finished 13 of them and went with 11 for the album. I want to release an album a year for the next three years. I've got enough material for a second album already so I'll be going into the studio in the spring to work on it.”

Ultimately it is Eliza’s love of music that keeps her inspired. She says, “I love being around music, I love making music and I love teaching it. I've seen the difference that music can make in people's lives after working with at risk youth. I am much more apt to pick up a guitar or banjo at the end of the night instead of watching TV or going on the computer. I'm always humming or singing tunes wherever I go.”

For more information on Eliza Mary Doyle and her new album, please visit her website here.

This profile is based on a telephone interview with Eliza Mary Doyle conducted and recorded on Sept. 29, 2016. 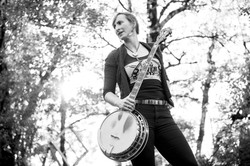