I talk to The Bombadils' Luke Fraser about his passion for folk music, the vibrant Canadian folk music scene and his sources of creative inspiration.

Luke Fraser and Sarah Frank started The Bombadils as a part-time Irish pub band while they were studying classical music at McGill University in Montréal. The band has changed over the years and grown into something more mature and nuanced.

Luke explains, “We’re interested in traditional Irish music, bluegrass and old time music. We were playing a lot of covers and arrangements of traditional songs in the pubs, and it felt right to create new music in those styles. There’s also a strong influence from our classical music background in how we write and arrange the music.”

Striking a balance between original songs and arrangements of traditional music is important to Luke and Sarah. Luke says, “We take the knowledge we have from studying classical music and apply those ideas to the music we make. We really love arranging old traditional songs and coming up with our own flavour. We also love writing original material, and songwriting has become a big part of our musical life.”

Their latest album has seen a change in the band’s musical line up. Luke says, “Last fall, our bass player and flute player decided to leave to pursue some other projects. We’d already decided to record in December, and had a lot of work to do and songs to write. We didn’t know how it was going to happen without them, but decided to follow through anyway and do the best we could.”

He continues, “We ended up contacting all the folks we wanted to record with us, especially people on the west coast because the plan was to record everything on Bowen Island and work with two of our favorite sound engineers from Vancouver. We had different guest musicians come in and record on one or two tracks at a time, so each track has a slightly different line up.”

In terms of the album’s sound, he says, “The writing on the album is distinctly Bombadils, but we like to think it’s an evolution from the previous albums. We are more at ease with our singing, our writing and our instrumental playing so it ended up being a more confident album.”

One of the major challenges that Luke identifies for he and Sarah is learning how to deal with the business side of making music. He says. “You’re essentially running a small business so you learn as you go; you learn marketing, accounting, to reach out and ask for help and to look to see what other people you admire are doing and emulate them.”

Another challenge for Luke and Sarah is finding a balance between touring and having enough time at home. Luke says, “It’s a matter of finding a healthy balance between work and rest. We want to keep going strong for the next few years and not burn out, and that requires knowing our needs and limits.”

The Canadian folk/roots music scene comes in for strong praise from Luke. He points out, “I really feel that The Canadian folk music scene is thriving. It has a lot to do with how well our country supports the arts and provides funding for artists.  Our last album, for example, had funding from FACTOR and the Canada Council. The funding helped us with recording the new album, as well as with the marketing and touring surrounding it.”

Canada’s musical diversity is also something for which he is grateful. He says, “There’s so much musical diversity in Canada. There are so many beautiful types of fiddling from the Ottawa Valley to Québec to the Maritimes, so that alone gives you a lot of variety to pull from.  We love to play Irish, bluegrass and old time music too but we’re looking to our country for inspiration as well.”

The Bombadils’ future is full of growth in Luke’s view.  He says, “We’ve had a lot of momentum this fall and we hope to keep building our fanbase and there are lots of folk festivals, folk clubs, etc, we’d love to play. We’re working with Borealis Records and a great manager, who are helping us move things along. Hopefully we’ll just keep releasing albums and growing.”

Luke and Sarah discuss their sources of inspiration frequently since they’re often asked that question. Luke explains, “It’s hard to pinpoint it. Some of it can be attributed to both of us being exposed to folk music growing up. It was always there in the background. Then we both studied classical music and thought we’d eventually fall into a teaching position or an orchestra position, but folk music was the sound that really captured us.”

For more information on The Bombadils, please visit their website here.

This profile is based on a telephone interview with Sarah Frank conducted and recorded on Nov. 7, 2016. 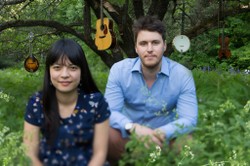