I talk to Rugged Little Thing about musical creativity, the passion for creation and where they find inspiration in their career.

Jille Magnus and Ryan Shotton are not just the duo known as Rugged Little Thing but also partners on life’s journey. They first met when Jille was playing backstage at a festival. She says, “We got together a few times after that jamming and playing music together. We started dating after that and it was a natural progression from there.”

The duo’s approach to music combines Jille’s love for old time and bluegrass music with Ryan’s slightly more folky background. He adds, “The songs we play are almost for nostalgia’s sake. They’re  songs that have had an impact on us.”

Rugged Little Thing plays a combination of original tunes and traditional pieces. Jille explains, “We’ve got a few originals that just happened. Once in a blue moon, you sit down and a melody just happens to pop out of your mouth and the words follow naturally so you don’t even have to think about why you’re writing the song or what it is you’re writing.”

When it comes to arranging songs, Ryan says, “We don’t try to sound like the versions of songs  we’ve heard too much. We try to sound like ourselves. As a duo, you can only do so much dynamically so you have to pick and choose. You can’t do the same tricks over and over again.”

The natural musical (and personal) chemistry that exists between the pair also helps when it comes to arranging songs. Jille says, “There’s a natural rhythm between the two of us. We don’t need to discuss the songs too much because once in a while I’ll look over at him, give him a nod and he’ll just grab the solo or whatever it is. Our harmony parts seem to just fit so effortlessly together.”

Ryan quips, “Even our speaking voices are a fifth apart. We could talk in harmony if we wanted to.”

One of the biggest challenges for the band is also one of their biggest selling points. Jille points out, “It’s harder to get those bar gigs or playing at a festival especially following a really high energy performance it’s hard to keep that up and not just fall into the soft folk category because that’s not really what we want to be.”

She continues, “It’s easier to get the gigs where they want an acoustic duo. We’re playing a canoe paddling festival in Waskesiu.  We’re easy to transport and easier to coordinate for that kind of gig.”'

Another challenge for the band is the level of work it takes to operate as an independent band. Jille says, “I’m realizing how much energy it takes to try to be an artist and make money in any capacity. It takes a lot of work, especially if you’re independent. We did it all ourselves. Ryan recorded our album this winter in our house. He mixed it, he mastered it. Even the artwork is hand stamped. We’re doing all of our promotion, booking our own gigs, sending our stuff out to radio stations. It’s a lot of work that falls on us.”

Finally there’s what Jille calls ‘the elephant in the room’ which is living together as a couple and working together at the same time. She goes on to say, “Sometimes as a couple that can be really challenging. Sometimes you have to deal with some pretty delicate conversations without taking it personally but it’s awesome that we get to do this together.”

Recording is something that Ryan enjoys. He points out, “I’ve been doing it for 15 years. I always wanted to make something that could be enjoyed over and over again because that’s how I listen to music. We took our time and made sure the album sounded right.  It’s a very stripped down sound  but I think that it represents us in a good way.”

Jille has nothing but praise when it comes to the Canadian folk/roots music scene.  She says, “Oh man it’s so good! I lived near Toronto for a while and the old time music scene there is out of control. There’s so many insanely talented people keeping really traditional music alive and they’re young!”

She adds, “On the other side of the country in Vancouver, bluegrass there is so good. I used to go to a weekly bluegrass jam there and the place was packed with people of all ages.  I hitchhiked across the country and ended up a bluegrass festival in Saskatchewan. The reason why I never left Saskatchewan  was going to that festival. This province is so chock full of crazy good talent in bluegrass, old time and folk. You get people like Kacy & Clayton, the Dead South, Crooked Creek and In With The Old.”

In future, there is more recording in the cards for Rugged Little Thing. Ryan says, “We’re going to probably record some more tunes this winter. It still feels like we’re getting started and pushing forward with the music.”

Jille continues, “I’d love to take Rugged Little Thing on the road.  I want to go down south to a few of the pretty awesome festivals like Clifftop*. I’d like to meet some other groups who are playing this music. A lot of them come through Saskatchewan but it’d be nice to be more immersed in it.”

One of the biggest sources of inspiration for the duo is the support system for musicians in Saskatchewan. Ryan explains, “There’s a big support system in Saskatchewan. It’s a smaller music scene so people show up and support each other more often because we’re all neighbours. It’s really encouraging. It’s genuine here. It’s not like a frenzy where you have to keep the other guy down to get ahead. ”

Another inspiration is the pair’s own personal relationship. Jille says, “Of course we also support each other. Music is the reason why we met, it’s what we first did when we got to know each other and playing music together is really inspiring and our favourite thing to do together.”

This interview was conducted and recorded on April 21st, 2016. 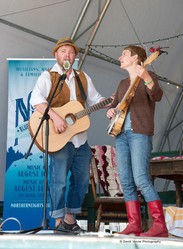