The Fretless’ Karrnnel Sawitsky talks to me about the band, their approach to music and their views on the folk and roots music scene in Canada.

The members of The Fretless first knew each other from their days playing fiddle contests across Canada. They became a band after Ivonne Hernandez (who left the band recently) had the idea of starting a new project. She had graduated from Berklee College of Music along with Trent Freeman and brought Karrnnel Sawitsky and Eric Wright on board. Sawitsky explains, “She called Trent and I and we both agreed that it would be a good idea. We got Eric’s name through a mutual teacher of theirs at Berklee. Eric was actually working in L.A. at the time with a music company. We Facebook messaged him, told him the deal and he actually quit his job to come out and record with us.”

From the beginning, the band was clear that they’d take the form of a string quartet while exploring  a wide variety of folk music traditions. Sawitsky says, “We wanted to expand and see what different sounds and musical arrangements we could create within that quartet format. We always wanted to make it as difficult on ourselves as possible both in the arrangements and the playabilty of the music. We  also wanted to maintain the live, energetic feeling of folk music.”

The band’s musical influences go far beyond the world of folk and old time music. This becomes clear when the band’s driving in their touring van. As Sawitsky points out the influences range between his attraction to singer-songwriters and ‘90’s alternative music, Eric Wright’s interest in dubstep as well as old-time American music and Trent Freeman’s interest in jazz.

Most of the band’s new music is written in preparation for recording albums according to Sawitsky. Intially there’s free reign on the types of tunes that each of the band members brings to the table. Sawitsky says, “We lock ourselves in a room and just bounce ideas around about original tunes that one of us has written or trad tunes that we like. After that, it’s like a dartboard, we’re just throwing darts out there and five percent of the darts stick. Everyone’s just swatting the darts away and being like, ‘Not that idea, not that idea, not that idea!’ until we come up with some tunes that we agree we’ll work on.”

Trent Freeman is another big part of the music creation process for the band. Sawitsky says, “We call him the chord master because he just has a unique ability to take an idea and make chords and his speed at creating the chords and finding the parts is what makes things happen.”

There are two main issues that face the band in Sawitsky’s mind. The first issue is the business aspect of being a musician of which Sawitsky says, “Obviously music is much more than a business but when you’re doing it as a career, you see the business side of it and every aspect of that is challenging.”

The second issue that he highlights is the fact that The Fretless’ sound can sometimes challenge certain listeners. He explains, “People don’t always know what to expect from our music. Purist classical fans or purist folk fans often meet us with a little hesitation. The biggest thing is getting people to open their ears and not be afraid to listen to us when we do something a little bit different.”

In Sawitsky’s view, the Canadian folk and roots music scene is thriving. He says that there was a period of time where the music struggled to strengthen its identity but adds, “Mainstream bands have brought in more folk sounds and that’s helping the scene generally. The way things cross genres now definitely helps because you’re having folk players doing collaborations with rap artists for example. I think it’s really strong and I think we’re on the right trajectory.”

While The Fretless want to stay true to the instrumental music they’ve been making and the fiddle traditions upon which it is based, Sawitsky says they’re also interested in expanding in new directions. He points out, “We’ve been really excited by working with vocalists and arranging songs for vocalists on our own. When Ruth Moody sang with us, she said it was a different experience not having a guitarist or a bass player or a drummer to provide the rhythm aspect that she’s used to but that there was such a rhythmic aspect to the arrangements that we do to back her.”

In terms of motivation, Sawitsky says that he’s driven by his need to write music and the body of work that he’s created. He says, “It feels like I’m getting rusty after a month of not writing music. I also look back at my body of work and realize that I’ve created some great stuff, some not great stuff and some terrible stuff but it’s all about the time spent creating that body of work.”

He concludes, “In 30 or 40 years when I’m an old man, I want to be happy with my body of work and still have the desire to keep making music.”

For more information on The Fretless, visit them here.

This article was based on an interview conducted with Karrnnel Sawitsky and recorded on April 2,2016. 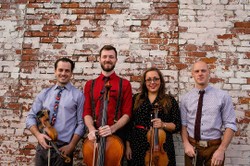